Conferences, concerts, publications and all cultural events organised or promoted by the Foundation have become synonymous with quality and excellence over the years and increasingly attract scientists, literary figures, artists, fans and students from all over Italy and also from further afield. The name the Foundation has made for itself and its credibility have enabled it not only to consolidate relations with institutions and universities, but also to forge partnerships with leading museums, brands and businesses in Italy.

During the year, the Piaggio Museum continued its development process and further improved display facilities, with new furnishings and systems for the Vespa Room, enhancing the aesthetics and ease-of-use for visitors

New models of the Vespa, Ape, new mopeds and new motorcycles, all with considerable historical value and of great interest to fans, were added to the collections on show.

The Museum's appeal was highly appreciated by visitors the world over, who awarded it a Certificate of Excellence for the fourth year running on Tripadvisor, with it joining the Hall of Fame. The number of visitors went up, with figures at just under 80,000, an increase of 10% over 2018

In 2019, as has been the case in recent years, the Piaggio Historical Archive contributed significantly to many of the activities of the Piaggio Foundation. It continued its valuable role in supporting research and in managing requests for meetings and consultations from scholars and researchers (with a significant increase in requests for advice regarding high-profile scientific research within the academic sector), as well as assisting with the Museum’s teaching activities and the iconographic and documentary research for books and publications and for the preparation of exhibitions and internal and external events. In particular, it worked on Fuoriporta. Un viaggio alla scoperta del gusto e dello stile italiani (Taking a trip. Travels to discover the history of Italian flavours and style exhibition (15 May- 10 November 2019), in association with the long-standing cooking magazine “Cucina Italiana”.

The Archive was valuable in work to check the Museum's information content, with the aim of revising the explanatory texts of the models (over 200 items) in general. The Archive has also continued to grow and strengthen its partnership with Piaggio internal offices, providing advice and information on historical matters and selecting and sending images, in particular for a number of licensing projects, beginning with the impressive file-based publication Vespa che passione! (A passion for Vespa!) 62 issues, edited by Centuaria, where it managed the iconography research and historical supervision. It also contributed recently to the launch of Ciao. L’indimenticabile ciclomotore italiano (Ciao. The great Italian scooter), an upcoming publication of 50 issues, edited by Centauria. Support was provided for image searches to provide inspiration for the new Lifestyle collections.

The Piaggio Foundation's cultural project was a great success in 2019, with considerable effort being made to retain and attract many new visitors. Activities and events of this project are outlined below.

Exhibitions are an important vehicle for the Piaggio Foundation and its Museum to communicate with and attract the public. The 2019 programme of events, all sponsored by the Region of Tuscany, is given below.

Designed to attract a younger public who are fans of comics and "superheroes" to the Museum, the exhibition was opened at the end of 2018 and will run through the first few months of 2019.

To celebrate Pio Manzù, 80 years on from his birth and 50 years from his death, the exhibition celebrated one of the most brilliant industrial designers of the 1960's and 1970's. He was active in numerous sectors but above all his visions and works in the automotive field made history, and were some of the most important milestones in automotive style, able to influence the development of vehicles for decades to come. The exhibitions showcased many of his sketches and style exercises for the Piaggio Group.

In this exhibition, the Piaggio Foundation wanted to contribute to events celebrating the 500th anniversary of Leonardo Da Vinci. Organised in association with the Museo Leonardiano di Vinci and the Istituto di BioRobotica of the Scuola Superiore Sant’Anna di Pisa, the exhibition was held during the conference Dalla Scientia Machinale alla Robotica e all’Industria 4.0 nella Toscana di Leonardo (From Machine Science to Robotics and Industry 4.0 in Leonardo's Tuscany). The theme linking the exhibition to conference events was the attempt to identify and portray to the public the economic, social and historical/cultural aspects that contributed to bringing Leonardo's talent to the fore, and subsequent developments in the manufacturing, urban and social fabric in Italy, in order to explore the birth of creativity and innovative spirit.

In 2019, the Pontedera Music Festival made its début - a concert season brought into being by the Fondazione Piaggio, Accademia della Chitarra and Accademia Musicale Toscana. This Festival is a landmark event for the local area, offering quality culture and a programme for 2019 with no less than 26 events. Thanks to the joint efforts of the organisers and decision of the prestigious record company fonè to celebrate its 35 years of activity in this concert season, the Pontedera Music Festival hosted numerous international artists, many of whom were performing for the first time in Pontedera. The following concerts were held:

Congresses and conferences organised and/or sponsored by the Fondazione Piaggio

– Comunicaimpresa, a conference organised in association with ASCAI (Association for the Development of Company Communication in Italy).
– Experience, gioco e apprendimento. L’edutainment come strumento di comunicazione del patrimonio aziendale (Experience, play and learning. Edutainemnt as a means of company communication). Conference organised during the Annual Assembly of Museimpresa.
– Creative day - Esperienze professionali e nuove visioni (Creative day - Professional experiences and new visions). Training conference organised in association with the Istituto Modartech, for school students.
– L’Unione Europea e i Balcani (The European Union and the Balkans). Conference organised in association with the Embassy of Montenegro in Italy and the Consulate of Montenegro for Tuscany.
– Defibrillatori pubblici: moda o necessità? (public defibrillators: a trend or a need?) A session for school students.
– Leonardopuntozero. Tra genio e innovazione (Leonardopuntozero. Between genius and innovation). A journey with Leonardo da Vinci at Amboise, in an land to discover through slow tourism and eco-travel.
– Dalla Scientia Machinale alla Robotica e all’Industria 4.0 nella Toscana di Leonardo (From machine science to robotics and Industry 4.0 in Leonardo's Tuscany). A conference dedicated to the genius of Leonardo to mark 500 years since his death, organised by the Fondazione Piaggio in association with the Museo Leonardiano di Vinci and Istituto di BioRobotica of Scuola Superiore Sant’Anna di Pisa. Two days, with talks from leading scientists and experts, with the conference proceedings being published by the Fondazione Piaggio.

Events and programmes dedicated to young people and students

– Crea@tivity. An event on innovation and training in the field of design, covering all sectors through the involvement of schools, companies, students and experts. The theme of the 14th edition was: CONN-ACTION.
– Modartech fashion show | Futur is. The creativity and talent of collections and projects of students at the Istituto Modartech on the catwalk, at the end of the 2018/2019 academic year.
– Museimpresa Lab – Settimana for teens: Alla scoperta della Vespa … perché ti resta in testa (Museimpresa Lab - Teens' Week - Discovering the Vespa... why it will always be with you). During the Business Culture week, the Piaggio Museum took part in the Museimpresa Lab project, proposing the #settimanaforteens, with the project “Alla scoperta della Vespa…perché ti resta in testa” (Discovering Vespa - why it will always be with you"), created by students from the Fermi Technical Institute, Pontedera.
– Cantieri d’Arte 2004/2019. Una Storia di passione (A history of passion). A presentation of the Cantieri d’Arte 2004/2019 Project. To celebrate teaching activities from the last 15 years, the local authorities of Pontedera and the Piaggio Foundation, in partnership with the association L’Ombra Somigliante, Cred Valdera and the High School Liceo Classico Scientifico XXV Aprile, as part of local educational projects and sponsored by the Region of Tuscany, celebrated the training and cultural programme from 2004 to the present day which has promoted contemporary culture through the experimentation of artistic languages. Presentation of the work Cantiere d’Arte. Una storia di passione (Art at work. A passion) and the documentary produced by the Association Associazione Ombra Somigliante.
– Laboratorio ludico – didattico all’insegna della storia della Vespa dagli anni ’40 ad oggi (Workshop on the history of the Vespa from the 1940's to the present day). Organised for the National Museum for Families Day, with a guided tour for older and younger visitors of the exhibition FUORIPORTA Travels to discover the history of Italian flavours and style and a workshop for children, with a new take on some typical dishes of classic Italian cuisine (bread, pizza, pasta, fruit and vegetables).
– Noi abbiamo futuro – Undici adolescenti e un Aperadio per salvare il pianeta (We've got a future - Eleven teens and Aperadio to save the planet). A meeting organised together with Radioimmaginaria, the teenagers' radio station and the first network in Europe run by youngsters aged 11 to 17. Presentation of the OltrApe documentary, produced by Fabrica by Oliviero Toscani, on the journey of eleven young speakers of Radioimmaginaria and the novel Noi abbiamo futuro (We have a future) written by Michele Ferrari with readings by Renato Raimo in the role of Corradino d’Ascanio.
– The Mathematical games award, a competition for high school students.
– The Certamen award, a classical literature competition for high school students.

– Rallies of the Vespa Club, Ciao Club and other motorcycle and motoring clubs.
– In Vespa from the Piaggio Museum to Pisa. The history of the Vespa from the hills of Pisa.
– Våffeldagen at the Piaggio Museum. A special day for Swedes in Tuscany and their friends. A guided tour in Swedish and celebrating Våffeldag with a cup of coffee, våffla and other Swedish specialities at the Museum Apebar (bar).
– Christmas Sundays at the Museum. On Sunday 8, 15 and 22 December, for the first time ever, visitors and tourists were able to experience all the Christmas atmosphere of "Sundays at the Piaggio Musuem". Piazzale Corradino d’Ascanio, in a Christmas version, with lights and music, was the venue of Ape Street food and typical wood chalets where visitors could buy local products and taste excellence local produce. The Piaggio Museum also hosted a Christmas Village with Father Christmas, and children's entertainment and games.

– VALLIS ARNI # ARNO VALLEY. LA TOSCANA DAL FIUME AL MARE TRA EREDITÀ STORICA E PROSPETTIVE FUTURE (VALLIS ARNI # ARNO VALLEY. TUSCANY FROM THE RIVER TO THE SEA - FROM HISTORY TO FUTURE PROSPECTS). Edited by Maria Luisa Ceccarelli Lemut, Fabrizio Franceschini, Gabriella Garzella, Olimpia Vaccari. This new volume from the Studi Tommaso Fanfani collection is the result of a project developed by the Piaggio Foundation together with Pisa University, with the support of the local authorities of Pontedera, Pisa and Livorno. The project was presented at the Auditorium of the Piaggio Museum and at the Auditorium of the Chamber of Commerce, Pisa, and will be presented at the Livorno Foundation in early 2020.

Initiatives outside the Museum 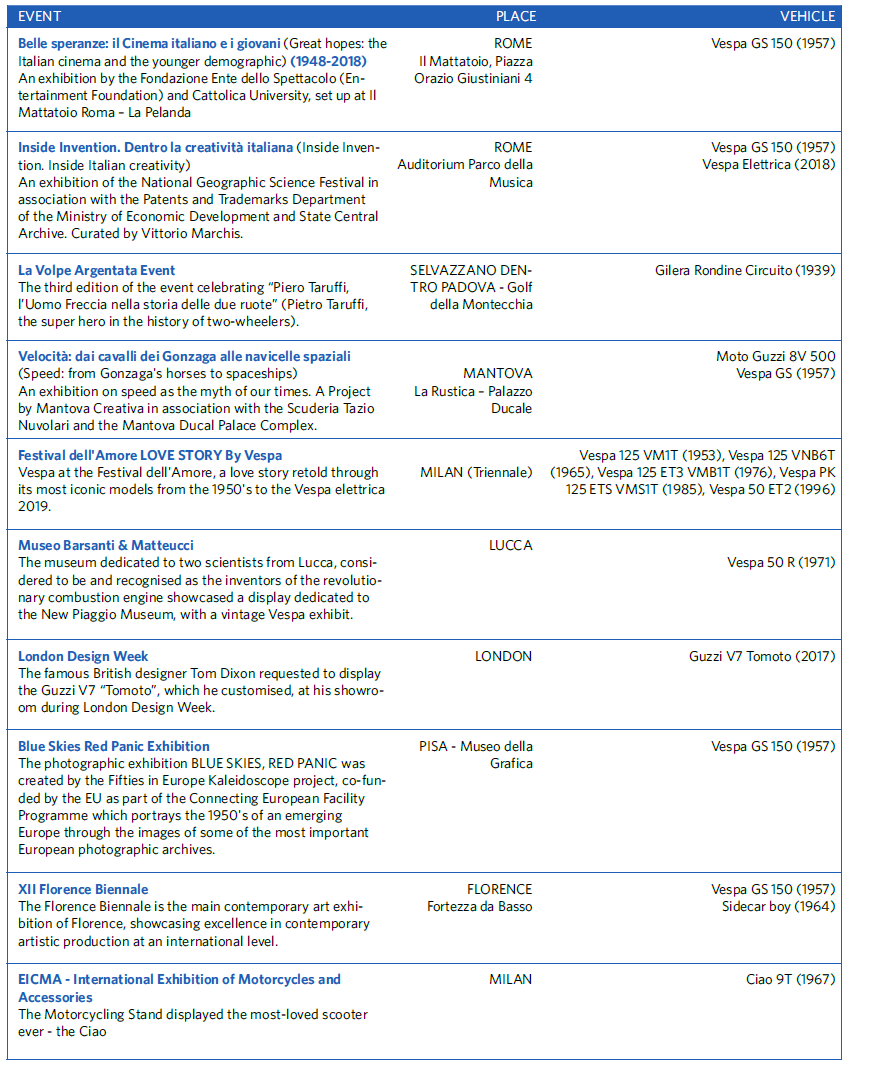 The social media strategy of the Piaggio Museum aims to keep its fans up to date about the Museum's activities and involve them in events.

During 2019, the history of the Piaggio Museum was highlighted with the publication of some valuable images from the historical archive.

To ensure a constant flow of information on Facebook and Instagram, 4 slots were planned for the year (Christmas holidays, the FuoriPorta exhibition, summer holidays and exhibition on Leonardo) each with around 10 posts.

142 posts were put on Facebook, of which 36 images from the archives, 42 write-ups, 54 about events and 10 shared with Piaggio.

The Museum was awarded a certificate of excellence for the fourth year running on Tripadvisor, with 744 reviews and a rating of 4.5/5 out of 5, to earn a place in the hall of fame.