The Piaggio Group started an Enterprise Risk Management (ERM) project to define and implement a structured, integrated system to identify, measure and manage company risks in line with applicable best practices. During 2020, the campaign to update the Group's risk profile, involving company managers across the Group, identified 160 risk scenarios, comprising 26 categories which were grouped into 4 level-one macro-categories (External, Operational, Financial, Strategic Risks). In this context, issues concerning environmental and social aspects, human resources, human rights and the fight against corruption were all analysed, as detailed below.

The analysis refers to the actual and potential effects of the Group's operations on the environment, considering, for example, atmospheric emissions, the impact of noise, discharge and waste disposal processes, using and safeguarding natural resources and protecting biodiversity, as well as environmental compliance aspects in a national and international dimension.

Greenhouse gases (mainly CO2) and Volatile Organic Compounds (VOCs) released by solvents used in painting, are some of the most hazardous substances for air pollution generated by automotive operators. Structural actions on the Group's production plants, carried out over time, guarantee limited pollutant emissions.

The structure of Piaggio's production sites has been designed based on support mechanisms that use energy from fossil fuels. The use of resources at the production faculties and offices of all affiliates is monitored daily, with the aim of optimising energy use and reducing consumption.

Operations to clean up sites were necessary due to historical site contamination: the pollutants removed had not been used for several decades by the sites, proving the historical nature of this contamination. Other cases of ground contamination have never concerned the Group's operations: the classification, management and transport of waste produced comply with sector regulations.

The volume of water used in the production process is monitored monthly, to safeguard its conservation; a part of this water is re-used.

Lastly, all Piaggio sites have ISO 14001 environmental certification and investments are made each year to reduce the environmental impact of production sites.

This area covers numerous aspects, such as the management of human capital, including career development, the remuneration and training system, the promotion of diversity and inclusion, as well as aspects relative to occupational health and safety and trade union relations.

Piaggio operates globally with employees in Europe, the Americas and Asia. It promotes diversity in age, culture, ethnics, religion, political opinion, civil status, gender, physical ability, sexual orientation, encouraging different ways to achieve and reach the highest levels of performance within a single and broader-ranging organisational set-up of the Group. The integration of disabled people into the workforce is also made possible in practice by the accessibility of company facilities and the existence of a relative company procedure.

Piaggio adopts a system of recruitment, development and salary packages for personnel which recognises and rewards merit and performance. Development tools are used to build on and continually improve skills, while empowering potential, recognising and rewarding outstanding performance. Reward policies remunerate people and their contribution based on principles of meritocracy and transparency. The above mechanisms reduce potential risks related to these aspects to a residual level which is not significant.

The Piaggio Group acknowledges the role of trade union organisations and worker representatives and is committed to establishing relationships with them that are characterised by attention, dialogue and a common understanding; in fact, assessment and continual engagement are considered essential for identifying the best solutions for the company's specific needs. For these reasons and despite the high number of employees with trade union membership, strikes are infrequent.

As regards occupational health and safety, testing motorcycles with a medium and large engine capacity entails the highest risk levels. Generally, the risk of accidents/injuries to personnel is mitigated by aligning processes, procedures and structures to applicable occupational safety laws and international best standards, and promoting safe behaviour, through targeted training.

The social sphere includes aspects concerning Piaggio's relations with consumers, as well as the effects of the business on the community.

In the first case, product quality and reliability are essential and key to obtaining and guaranteeing customer satisfaction and safety. In the “Product – Operational Risk" category, risk scenarios relating to potential product defects have been mapped. To mitigate these risks, Piaggio has established a Quality Control system, it tests products during various stages of the production process and carefully sources its suppliers based on technical/professional standards. The Group is also committed to being awarded and maintaining certification of its quality management systems at global level (ISO 9001).

The Group undertakes to redistribute economic value generated to support social solidarity initiatives and promote local areas. In 2020, the collaboration between the Piaggio Group and (RED) - an association founded in 2006 by Bono and Bobby Shriver - continued, with more than USD 650 million allocated to the fight against AIDS and Covid-19.

Interest in research and progress in the health sector led the Piaggio Group to donating €250,000 to the IEO CCM Foundation (European Institute of Oncology) and €100,000 to the Mantova Hospital (to help deal with the emergency due to the Covid-19 pandemic). Piaggio also supported some charities by giving away vehicles to be used as prizes in auctions.

The Indian and Vietnamese subsidiaries have also always been active in social work, supporting and promoting charitable initiatives.

As set out in the Code of Ethics, adopted in 2004 and updated during 2017, Piaggio specifically prohibits any form of discrimination or forced labour. This Code has been distributed to all subsidiaries and clearly states the principles and values the entire organisation takes inspiration from.

To maintain the highest standards of ethical, moral and legal conduct, Piaggio encourages its employees to report any suspected misconduct.

The Whistle blowing Policy, initially developed for the Group's Indian company, aims to provide a safe means for employees and other parties concerned to report violations that come to their knowledge in the context of their work activities. For this purpose, in compliance with Law 179/2017, an entirely new section with regulations on whistle-blowing designed to protect workers that report unlawful activities and irregularities that come to their knowledge during their work was added to the last revision of the Organisational, Management and Control Model pursuant to Legislative Decree no. 231/2001.

Based on prevention and control mechanisms established in the Code of Ethics and adopted by all Group subsidiaries, no risk scenarios relative to the violation of human rights were identified.

The fight against both active and passive corruption comes under the risk categories "Internal/external offences" of the Group's risk model. In its Code of Ethics, Piaggio strictly prohibits any practice of corruption, request for and/or provision of preferential treatment, of any collusive behaviour, solicitation, whether direct/indirect and/or through third parties, of personal benefits of any kind for oneself and/or for others, of material benefits and/or any other advantage of any extent in favour of third parties.

A number of processes, procedures, roles and responsibilities have been defined to achieve the above objective, as regards business negotiations/relations with the public administration sector and with private entities.

The controls briefly described above decrease residual risk relative to episodes of active/passive corruption to a negligible level.

For a more detailed analysis of all the risks identified by the Piaggio Group, see the Report on Operations in the 2020 Consolidated Financial Statements. 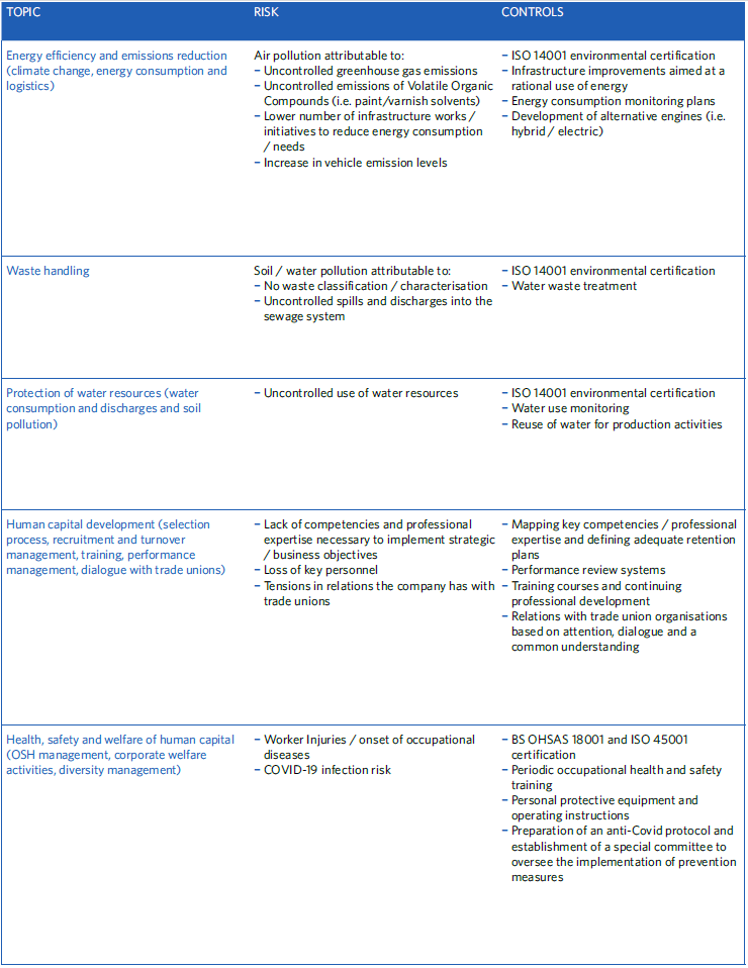 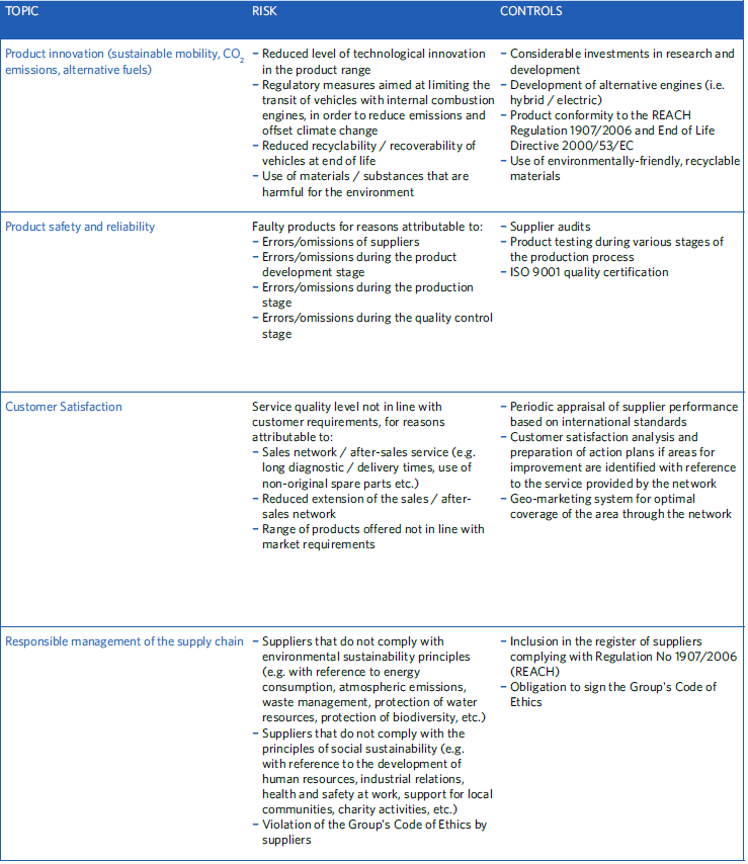 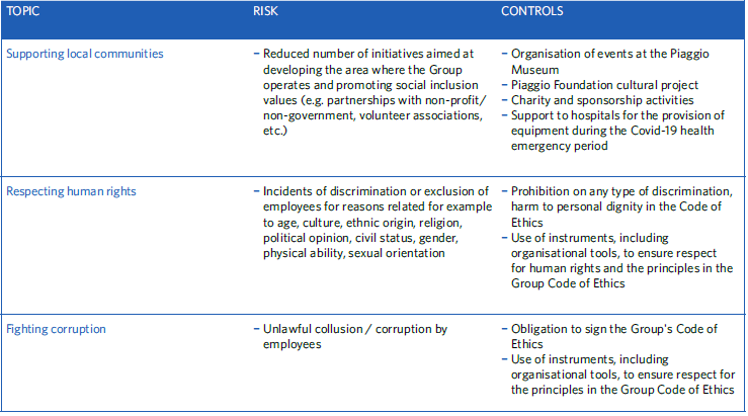