THE APRILIA RACING TEAM TURNS OUT ON THE STARTING GRID WITH TWO RIDERS, MAX BIAGGI AND EUGENE LAVERTY, STRONGLY MOTIVATED TO RIDE THEIR RSV4 BIKES TO THE TOP.

The curtain falls on the 2012 World Superbike season which will start on 26 February at the Australian track of Phillip Island.

For the fourth year in a row, the Aprilia Racing Team participates as a key player in the WSBK world, the championship reserved for factory derivative bikes, where all of the major sport bike manufacturers face off.

The Italian team can count on five time world champion Max Biaggi, the only Italian in history to have won (in 2010 on his Aprilia RSV4) the WSBK championship wreath, accompanied by twenty-five year old Irishman Eugene Laverty, who had an excellent 2011 season in his championship début. 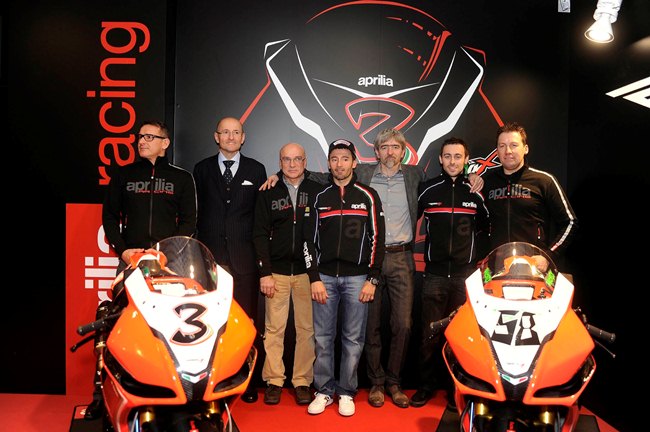 Thanks to this top notch formation, Aprilia Racing Team has set its sights on winning the Rider and Manufacturer championships.

The level of competition, if anything even higher after the winter market moves, bears witness to the importance assumed by World Superbike, a true proving ground for the best factory production bikes.

In this exciting technological competition which makes World SBK the best loved by bikers, Aprilia brings to the table the diamond head of its history, rich with technology and innovation: the four cylinder RSV4, characterised by the exclusive architecture of its narrow 1,000 cc V engine, an extraordinary project which was born and raised within the Aprilia Racing Department and simultaneously developed for the street version of the bike, available to all enthusiasts.

Aprilia - Piaggio Group - is one of the most victorious sport motorcycle brands, having collected an astonishing 49 world titles in its brief history: 38 in MotoGP (where it also boasts a record of 294 GP wins), 2 very recent victories in Superbike and 9 in off-road disciplines.

Coordinating the Aprilia Racing Team operations during the 2012 SBK season will be Luigi Dall’Igna, Technical and Sport Director of the Racing Department, with  Dario Raimondi working alongside him as Team Manager. Max Biaggi's garage will welcome new entry, Aligi Deganello as head mechanic, while Eugene Laverty will entrust is RSV4 to the able hands of Marcus Eschembacher. 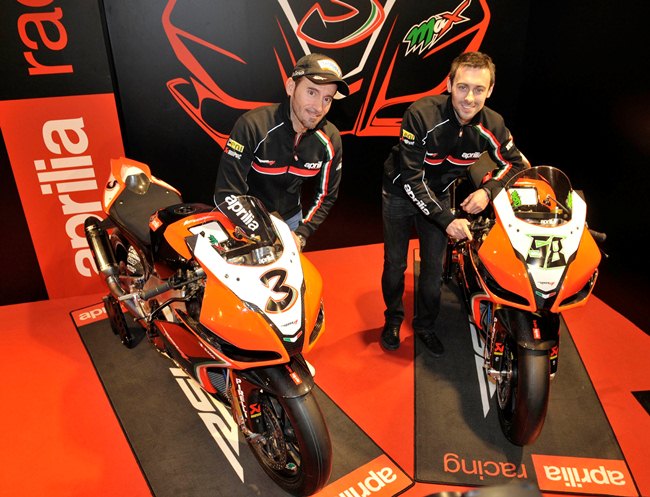 Max Biaggi was born in Rome on 26 June, 1971. He began his approach to the motorcycle racing world in 1989, winning the Italian Sport Production Championship the next year. His ties with Aprilia began in the 250 class where he became European Champion in 1991, but his world consecration came three years later: in 1994 Max rode an Aprilia to become the 250 class World Champion, the first of four consecutive wreaths.

Back astride a bike from Noale in 2009, the year the new RSV4 made its début in World Superbike, the Corsair confirmed his feeling with Aprilia the following year when he became the first Italian to win the factory derivative World Championship.

New year, new challenge: after an unlucky 2011, how are you feeling about the upcoming season?

New challenge, but… the same Max! All joking aside, my motivation remains unchanged. If anything, I have to say that it has increased even more after what happened in 2011. We were coming off a World triumph, with a lot of expectations and all eyes on our results, but things didn't go as planned. That's water under the bridge. Now we're looking forward to the new season with only one goal: to win.

For the fourth year in a row you'll ride the RSV4 onto the track. A successful duo?

My relationship with the RSV4 is a particular one. I can say without any false modesty that I witnessed its birth and have watched it grow up. We took it to the track, developed it and took it to the top step of the podium many times, in spite of the adversities. We're a close couple, we have our rough spots, but we also know how to get through them. I think that the RSV4 still has a lot to say in this championship and, given the level of competition, I'll certainly have to bring the most out of it.

Speaking of competition, have the various changes of uniforms altered the balance of the championship?

Like I always say, it's difficult to judge worth on the field and it will stay like that even after the first race. Only about halfway through the season will we really be able to tell who made the right choices and did the best work. Based on what we've seen thus far, Ducati and Honda seem to be the fairly tough competitors, but I don't underestimate anyone because BMW and Kawasaki have also gotten stronger and they're aiming for the big target. This will be an even more heated season than 2011 if that's possible.

One of the adversaries is no doubt your new team mate, Eugene Laverty.

Undoubtedly, in racing the first rival to beat is the one that has the same equipment as you. I look at it as a nice challenge, positive for the Team and for us riders who are forced to always give it our all. I'm happy to see another RSV4 being competitive on the grid. It confirms that in these three years we've done a good job of developing it.

A less technical question: will you go back to using your "historic" number - 3?

Unfortunately I have to say 'yes', because that means that we weren't able to defend the number 1 we earned in 2010. In all actuality, the 3 never completely disappeared. Even inside the graphic we used for the number 1 you could see my old number. We riders are superstitious. I'm attached to the number 3 and I wear it proudly because I associate it with a lot of great emotions that I've had during my career. We'll see if I have to replace it again at the end of the year...

Eugene Laverty was born in Ballymena on 3 June,1986. He began racing in 2001, winning his first race in his native country. His career continued with the English 125 Championship and Supersport before embarking in the world 250 class (on an Aprilia). In 2009 and 2010 Eugene was the World Supersport co-champion, taking a total of 12 victories.

In 2011 he made his début in World Superbike: with 2 race victories and a fourth place finish in the overall standings, he stood out as the best rookie.

Eugene, after a positive 2011 debut season in World Superbike, you ride into your second season astride the Aprilia RSV4. Are you ready for the new challenge?

I certainly am. I had a promising start when I tested my new bike for the first time at Portimao. I found a good feeling right from my first laps on the RSV4 and the guys in the team made me feel like part of the family straight away. In any case I won't underestimate the foreseen difficulties that come with a new adventure like this one.

You've ridden various types of racing bikes in different championships: what struck you about Superbike?

First of all Superbikes are very powerful, we’re talking about more than 200 horsepower. Superbikes are extremely high performance machines and they require maximum riding effort. There is no time to take in the scenery when racing any bike, even more so when racing with 1000cc! The factory derivatives have made giant steps forward like electronic management and performance in general. They are true racing bikes, which goes to show the refinement of the factory models that our bikes come out of.

Everyone agrees that the Superbike Championship is a particularly heated competition. What do you think about this?

I can't help but agree. I don't think there are many motorcycle racing championships that can provide the same balance between different bikes that brings out the qualities of the rider and his Team. It's a championship where details make all the difference, but especially consistency: both Max and Carlos, winners of the last two seasons, built their success race after race, cutting errors down to a minimum.

So you need to be fast but without mistakes. Do you think that the new rule which limits each rider to one bike will create problems?

It will certainly be one more variable, especially in Superpole where you can ruin everything on the first lap with a crash. I think that I'm a rider who can deal with those types of situations, especially if I'm able to gain some familiarity with my Aprilia in the first test sessions. I'm sure it won't be an easy championship for anyone.

That's a question a lot of people ask me. In my second Superbike season, coming off of a good début, I won't make a secret of the fact that I'd like to make it to the podium often and take home some victories. We'll see about the rest as we go along. If everything goes smoothly I think the year will bring us some nice satisfaction. It's too early for predictions... we'll talk again in a few months!