Now available at your Piaggio Group dealer, the new Vespa GTS - also available in the sporty GTS Super version - is the largest, most powerful and most technologically advanced Vespa ever built.

Vespa GTS raises the bar in terms of safety and riding electronics equipment: 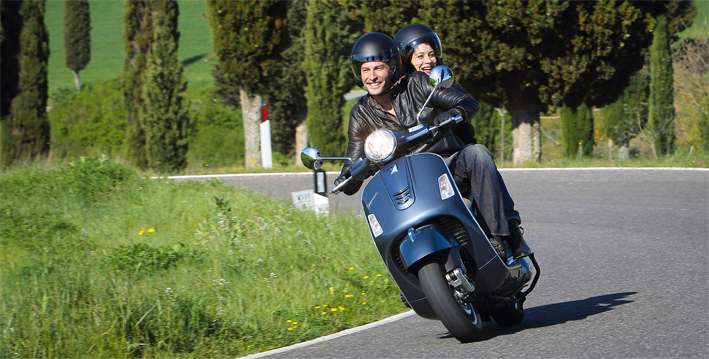 Pontedera, 24 April 2014 – The new Vespa GTS and Vespa GTS Super make their début, equipped with ASR traction control and ABS braking, cutting-edge electronic systems for active safety. These two new models are made in the spirit of the highest safety standards and even greater comfort thanks to the newly designed front suspension and new generation gadgets such as the Vespa Multimedia Platform, conceived to connect your Smartphone to your Vespa.

Large, convenient, comfortable, extraordinarily protective, the Vespa GTS - along with the sporty GTS Super version - combines its elegantly urban and city spirit with the travel and tourism vocation. Vespa therefore reaffirms its technological cutting-edge and introduces one of the most modern, advanced and safest vehicles in the world. 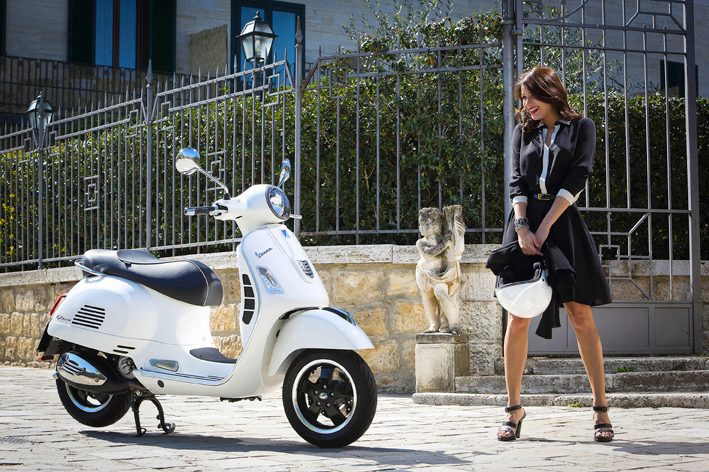 Vespa GTS provides a powerful and safe two-channel ABS braking system. Each wheel is fitted with a revolution detection system which instantly reads speed and deceleration. The sensors dialogue with a 2-channel control unit which activates the ABS system if one of the two wheels decelerates abruptly with respect to the vehicle, avoiding locking and ensuring stability. The dual disc active braking system and the large 12” wheels contribute to safety.

The ASR traction control system uses the electronics and the ABS sensors to compare the rotation speed of the two wheels. When the sensors detect excessive speed on the rear wheel compared to the front, the ECU intervenes to prevent slipping and avoid losing control of the vehicle. While still maintaining the classic single arm suspension on the front, the new Vespa GTS and Vespa GTS Super range adopts a completely redesigned system (ESS) capable of cutting sliding friction in half, increasing riding comfort.

The new saddle on the Vespa GTS and Vespa GTS Super provides superior comfort thanks to the new padding and different covering. The Vespa GTS Super saddle also provides a white line finishing that runs along the edge, another feature which is clearly reminiscent of the traditional Vespa sporty saddles. The new GTS Super, on the other hand, also has a different instrument panel, backlit in red, and black wheel rims, with the front suspension characterised by a red spring. 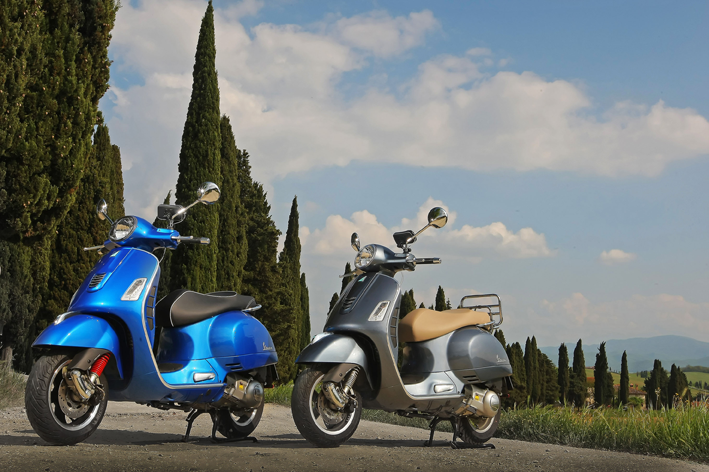 All models in the new Vespa GTS and Vespa GTS Super range come standard with a USB port located in the leg shield back plate compartment, while the front turn indicators contain a series of LEDs that act as daylight running lights. The trapezoid-shaped digital instrumentation is completely new:

The new Vespa GTS and Vespa GTS Super range add compatibility with the Vespa Multimedia Platform (VMP), the innovative multimedia platform which, when a Smartphone is connected to the on board electronic system VMP, transforms it into a real and sophisticated computer which is capable of providing the rider with various information both on the condition of the vehicle and on the route travelled. This allows the rider to use the Smartphone's touchscreen to keep constant tabs on all riding parameters and to handle both city traffic and longer trips in complete safety.

Vespa GTS and Vespa GTS Super are available with a 300 cc, single cylinder 4-stroke, 4 valve, liquid cooled with electronic injection engine capable of providing maximum power of 22 HP. These are values which guarantee the quick throttle response and extremely brilliant performance, making the new large body Vespas ideal vehicles both in city traffic and for touring, even at long range, in total comfort, whether alone or with a passenger. Vespa GTS Super is also available with a 125 cc engine, ideal for riders with only a category B driver's license.

Stefano Sterpone, Piaggio Group EMEA and Americas Commercial Director, had this to say about the new Vespa model: “The new Vespa GTS represents the most advanced, technological and high performance evolution of a brand which symbolises mobility. In every era Vespa has always offered the best of technology at the service of riding pleasure. The GTS, thanks to its size and the available engines up to 300cc, a record for engine capacity and above all for power that until a few years ago was unthinkable for the "Vespone", embodies a dual spirit. On one side there is the urban and city vocation and on the other the touring and travel vocation: the new GTS comes on the market today as one of the most technologically advanced vehicles in the world thanks to its extraordinary riding electronics systems. In addition to the two-channel ABS system, the new Vespa GTS has the ASR traction control system, a Piaggio Group exclusive, which significantly contributes to safety, preventing the rear wheel from slipping in poor grip conditions. In such a technologically advanced vehicle integration with Smartphones was a must and this is a system that Piaggio Group is progressively installing on all its major models. The new front suspension and some important aesthetic touches such as the LED daylight running lights and the new instrumentation make the new Vespa GTS a vehicle that looks to the future and which is built to strengthen the positive Vespa trend, evidenced by a few significant figures: from 2004 to the present more than 1.3 million Vespas have been sold worldwide and during this decade the annual information has steadily increased until hitting almost 190,000 units sold in 2013.”