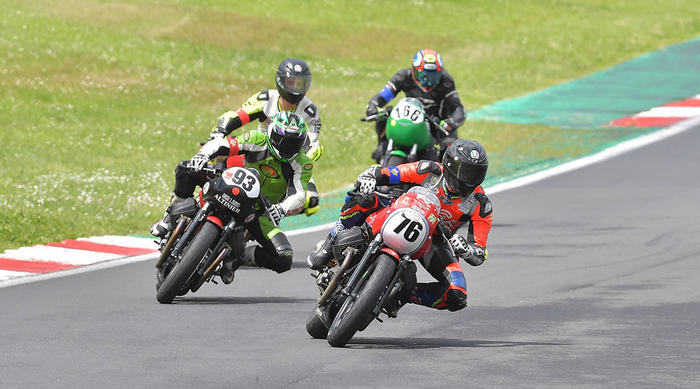 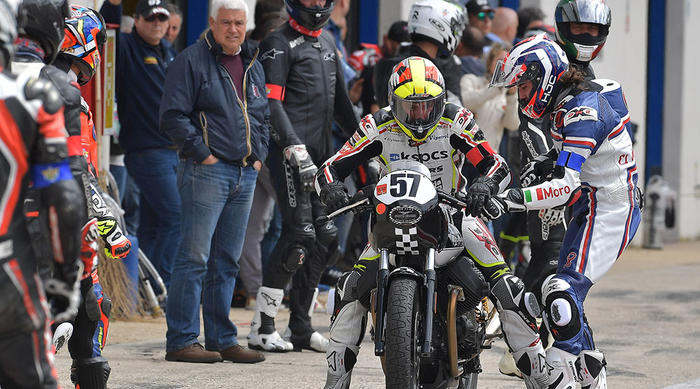 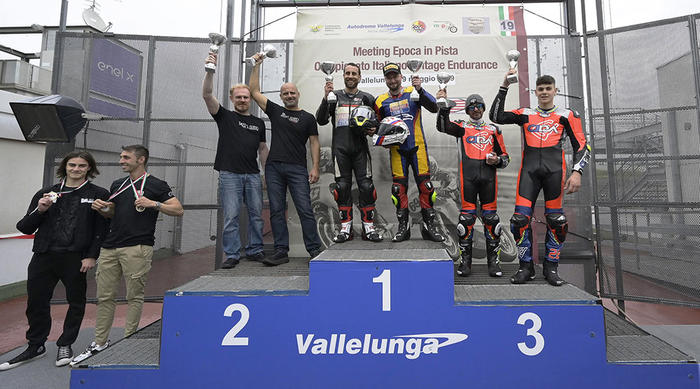 The new entry, the 117 racing team, triumphs in a spectacular three-way finish.

On the podium biker’s island and the Circuito Internazionale d’Abruzzo team, which maintains its leadership in the classification.

The community team “the clan” wins the special prize for the best fightback. Next appointment at Magione on 22 and 23 june 2019.

Campagnano di Roma (Rome), 19 May 2019 – The Vallelunga track hosted a spectacular second leg of the Moto Guzzi Fast Endurance 2019 Trophy. After the emotions of the opening race in Varano on 14 April, the track just outside Rome provided further evidence of the value of the trophy organised by FMI and Moto Guzzi: the mini one-hour endurance race was extremely hard fought and saw the first three teams fight out an exhilarating “flight” for victory, with less than 4 seconds between them as they passed the chequered flag. A very close finish, then, besides being unique entertainment for all 36 riders mounting their Moto Guzzi V7 IIIs fitted out with the GCorse Racing Kits and Pirelli Phantom Sportscomp RS tyres.

The emotions started on Saturday 18 May, with very close times both in the morning run-outs in the rain, and in the afternoon on dry asphalt, with the three quickest Teams which, at the end of the qualifying day, were grouped together over less than four tenths of a second. Pole position was held by Team Biker’s Island, consisting of Samuele Sardi and Marco Solera, whose best average time was 2’02”798, ahead of the pairing of Stefano Fugardi-Ermanno Bastianini (average 2’03”050), setting off as special guests in this edition, and the new entry, the 117 Racing Team (Matteo Giordani-Carlo Maderna, 2’03”173).

And it was the new pairing of Matteo Giordani and Carlo Maderna, despite a difficult start, who crossed the finish-line ahead of all the others after a fascinating hour’s racing, livened up by changes in riders and ending as a three-way fight for victory. Very fast away in a Le Mans style start, Team Biker’s Island then had to give way to 117 Racing Team after the first rider change, in the end finishing second, 1”7 back. The battle at the top also featured the young rider Riccardo Mancini and Nicola Maccaferro (Team Circuito Internazionale d’Abruzzo), then third on arrival just 3”7 behind the winners and still leader of the overall classification.

Just missing out on the podium was the team The Clan, consisting of the pairing of riders voted online by the official Moto Guzzi community: Niccolò Rosso and Alessandro Moro produced a fantastic comeback from sixteenth position on the first lap moving up to fourth. They won the special prize for the best fightback, as well as the prize for the fastest lap in the race, recorded by Niccolò Rosso in 2’00”645, at an average of over 122 km/h: a time which is further proof of the great performance which the “small” settemmezzo of Mandello equipped with the GCorse Racing Kit is capable of.

On a quick and selective track, the Moto Guzzi V7 III proved not only fast, but once again also great fun and suitable for everyone. There were only a few errors and slips, with just three Teams not classified: Luporacing, Scuderia Aquile Millenarie and Spirit of 4.5 - PMR Moto.

A format for everyone: classic atmosphere, young spirit. The new format of the Moto Guzzi Fast Endurance Trophy is perfect for everyone’s enjoyment, from the track novice to the seasoned enthusiast. Each race weekend includes two rounds of time trials on Saturday, both lasting 20 minutes for each rider. The average of the best times obtained by the two riders in the team will determine the starting position of each team in the grid for Sunday’s race.

A clear reference to the legendary endurance races of the past can be seen in the start of the race, which will be Le Mans style, i.e. with the bikes lined up on one side of the track and the riders at the start running across the asphalt to mount their bikes and set off. During the race each rider can ride for no more than 15 minutes + 2 consecutive laps: this means that the race – lasting 60 minutes – is enlivened by at least three changes in rider, which take place in the pits. At the end of the race points are awarded to the top 15 teams classified.

The next appointments are scheduled for the tracks of Magione (23 June), Adria (1 September) and Misano (13 October). Registration in the individual events of the Trophy is possible up to two weeks before the race, at the cost of 350 Euro per Team.

In order to keep up to date on all the latest news regarding the Moto Guzzi Fast Endurance 2019 Trophy, just consult the online pages of the Trophy, fastendurance.motoguzzi.com, and the website of the Italian Motorcycling Federation, www.federmoto.it.