Extreme weather made this year's record-breaking edition all the more epic than ever.

Mantua, May 26th 2013 – Two days in the saddle of a Vespa, from sunrise on Friday the 24th to the night of Saturday the 25th, for a total of 1006 Km in an itinerary starting and ending in Mantua and crossing six Italian regions: Lombardy, Trentino, Veneto, Emilia Romagna, Tuscany and Liguria. The 2013 edition of the historic “1000 km Vespistica” will be remembered for its record number of participants - 306 in all, from all over Europe and the US. 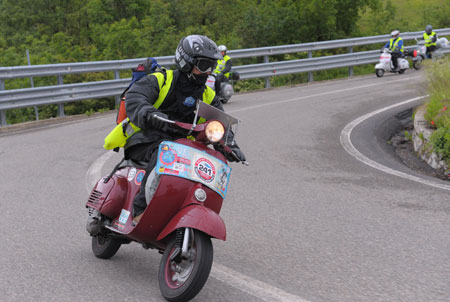 The winner of this edition, which was made all the more epic by the extreme weather conditions endured by the riders, was Elvezio Biserni, of the Vespa Club Mantova, who took the “Audax 1000” trophy home by scoring the least number of penalties at the time checkpoints along the route. The trophy was handed to Biserni during the gala lunch concluding an event that celebrates the spirit of travel and adventure, and which brings together enthusiasts from different countries and cultures who share the same passion for the Vespa.

Born in 1994, Andrea Saletti, also of the Vespa Club Mantova, received the award for the youngest participant.

Because of the bad weather experienced throughout northern Italy over the weekend, the route was particularly gruelling. Drenched by pouring rain almost from start to finish, the Vespisti even had to contend with snow on the Rolle Pass and on the Apennines. Of the 306 riders setting off 48 hours beforehand, only 192 made it to the finish in Mantua.

The 2013 edition of the 1000 Km Vespistica set off from Piazza Sordello in Mantua at sunrise on Friday towards Treviso, the destination of the first leg. The Vespas then took to the roads of the Romagna region to reach Ravenna along the Via Romea - a journey which took all like. The stragglers of the 1000 Km only reached Ravenna after 4 am, when the first to arrive in the city were already setting off towards Tuscany to tackle the legendary Muraglione Pass, pay a fleeting visit to Florence and then continue on to Pontedera - the site of the Piaggio factory where the Vespa was born and has been manufactured uninterruptedly since 1946. Here, the Vespisti were welcomed to the Piaggio Museum - hallowed ground for Vespa enthusiasts all over the world - before heading northwards across the Cisa Pass and back to Mantua. The last die-hards only reached the finish line in Piazza Sordello at dawn on Sunday morning.

The massed Vespas taking part made a truly spectacular sight. Every generation of Vespa was represented, from the earliest “fender headlight” models, produced from 1946 to the early 1950s, up to the modern Vespa GTS 300. The field of participants included many legendary models in Vespa history, such as the GS from 1955, the Primavera and ET3 from the 1970s, the Rally 180 and 200cm3 grand tourers, and numerous timeless Vespa PX models.

Created in 1951 to show the world the extraordinary capabilities and potential of what was to become the world's best selling and best loved scooter, the 1000 Km Vespistica soon assumed legendary status.

Nine editions of the 1000 Km were held up until 1970, drawing thousands of fans to line the roads and cheer on the Vespisti in the true spirit of a great motor racing event.

After disappearing from the scene for many years, the 1000 Km Vespistica was brought back to life by the passion of the members of the Vespa Club Mantova. This was not only a dream come true, but also - as demonstrated by this year's edition - a resounding success.