Sylvain Guintoli is 2014 World SBK Champion on his Aprilia RSV4 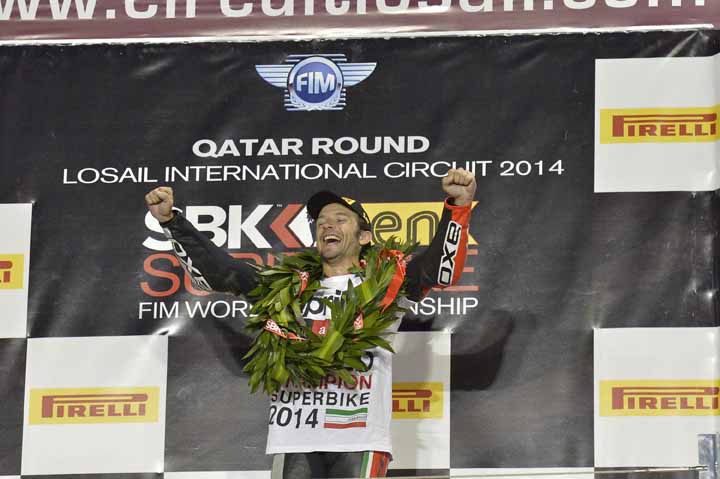 Losail (Qatar), 2 November 2014 - It is a triumph, a double world championship win that was unimaginable just a few races ago. On the Losail track in Qatar Sylvain Guintoli completed a comeback that will go down in Superbike history and with two brilliant and undisputable wins in the two night races on the desert circuit he overtook Tom Sykes, earning the World Champion crown for the first time in his career.

Aprilia doubles the celebration by becoming the Manufacturer World Champion for the third consecutive year, reaffirming the undisputed technical superiority of the RSV4, the Italian bike that has rooted the best competition in the world since its rookie year in World SBK (2009), winning 7 World titles (three Rider and four Manufacturer). This world championship combination (Rider and Manufacturer) is the third one for the Aprilia RSV4 after sweeping the competition in 2010 and 2012 with Max Biaggi.

Roberto Colaninno, Chairman and CEO of the Piaggio Group (which Aprilia has been part of since 2005) had this to say about Sylvain Guintoli and Aprilia's victory: "I am very proud because with Aprilia once again this year a great Italian brand has dominated on a global level in motorsports. "This was a difficult championship right down to the end, that seemed to have been lost but was then reopened and that makes the result we achieved today even more exceptional, with two world titles won. My compliments to Guintoli - simply extraordinary. Romano Albesiano did a very good job. Along with his team he demonstrated his ability not only to design great motorcycles, but also to successfully take on the challenge of sport management. Since returning to Superbike in 2009 Aprilia has won seven world championship titles in six years. Today's two world championship titles reward the Piaggio Group's technological innovation skills, which once again dominated despite the fact that our rivals become fiercer every year. It's not by chance that - in just ten years - we have seen Aprilia win 28 of its 54 world titles and the Piaggio Group has taken a total of 32 world titles in just a decade. Now we are facing a new challenge entering MotoGP which is taking place a year ahead of schedule with respect to our previously announced plans. We will be entering the premier world championship with the same spirit we have always had: dedication, a desire to learn and grow and the awareness of our abilities and our heritage as a great Italian brand." 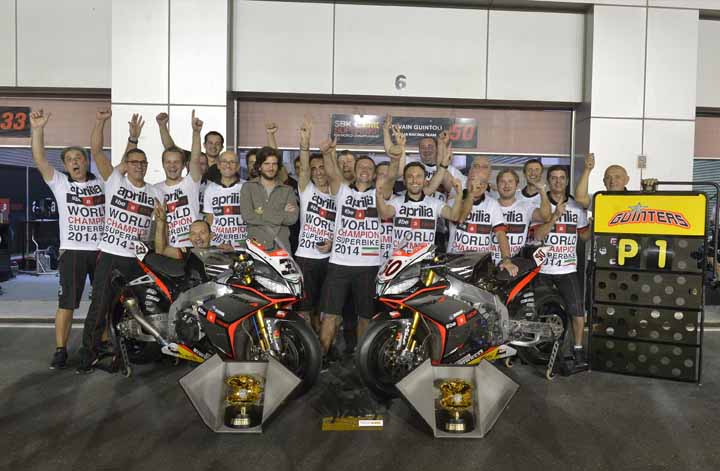 The night races in Losail were the culmination of a comeback that seemed impossible. After the American round at Laguna Seca the advantage Sykes (Kawasaki) had built up over Guintoli was 44 points, a huge gap with just three rounds left in the season. Since then the RSV4 and its riders were on the comeback trail, proving to be unbeatable. At Jerez and Magny-Cours Aprilia dominated the races winning three times with Melandri (and Guintoli second each time) and once with Guintoli (and Melandri second). These were extremely significant points that allowed Aprilia to catch up and overtake Kawasaki in the Manufacturer World Championship and Guintoli to turn up at the Qatar round trailing Sykes by just 12 points.

Guintoli's incredible comeback for the world championship title began with victory in Race 1. Off to a good start (fourth in the first lap), Guintoli overtook Sykes, his direct competitor for the title, who had been in front of him in the fifth lap and then Rea (in the ninth lap) and race leader Baz with 5 laps left to go. From that point on it was a gallop to victory which earned another 9 points made up on Sykes. At the start of Race 2 Aprilia's Frenchman was three points behind Sykes in the standings, a minimum gap which his authoritative and aggressive win annihilated. Sylvain took the lead in the fifth lap and from that point on it was a gallop toward the finish line and the win. In the end Guintoli took the world championship with 416 points against the 410 Sykes had racked up.

Marco Melandri, dominator in recent races, ended his weekend at Qatar with an eighth and fourth place, hindered by problems with grip that he was unable to resolve.

Sylvain Guintoli's first career World championship title had been building over the last two seasons. After a 2013 season which had him fighting for victory until a series of injuries to his shoulder hindered his race for the title, the French rider took advantage of his apprenticeship astride the RSV4 in the season that has just come to an end. Consistent, fast and determined, Sylvain conducted a season that was made incredible by his comeback, arriving at the title in the very last race. Supported by the team led by Romano Albesiano, skilfully exploiting every opportunity and taking advantage of his vast experience in the racing world, Sylvain Guintoli became the second Frenchman (after Raymond Roche in 1990) to win a factory derivative Rider World Championship.

With the titles won today the manufacturer from Noale now totals 7 World Superbike championships in the last five years and takes its extraordinary collection to 54 world championship titles won in just over twenty years.

The new Aprilia Racing adventure in World Superbike began in 2009 with the development of the innovative RSV4. With its exclusive 65 degree V engine and a chassis derived from years of racing experience, the Aprilia Superbike marked a turning point in the super sport bike world. Already capable of winning in its rookie year, the RSV4 broke the WSBK bank in 2010, its second season in the championship, taking both the World titles up for grabs: Manufacturer and Rider with Max Biaggi. This was the start of a long series of wins. Biaggi - the first Italian to win the World Superbike championship - doubled the Rider title in 2012 and the RSV4 once again took the World Championship for manufacturers in 2012, 2013 and again this year in 2014.

Seven World Championship Titles (3 Rider and 4 Manufacturer), 41 wins, another 89 podiums and 10 pole positions make up the extraordinary World SBK spoils of a unique bike, created to dominate both on the track and on the road.

In all Aprilia boasts 54 World Titles (38 in MotoGP, 7 in Superbike and 9 in off-road disciplines) which make it one of the most victorious brands ever on a global level in motorcycle racing. The Piaggio Group's extraordinary trophy case, thanks to Aprilia as well as its other historic brands, Moto Guzzi, Gilera and Derbi, now contains 104 World Titles to make it the most decorated European motorcycle manufacturing group. 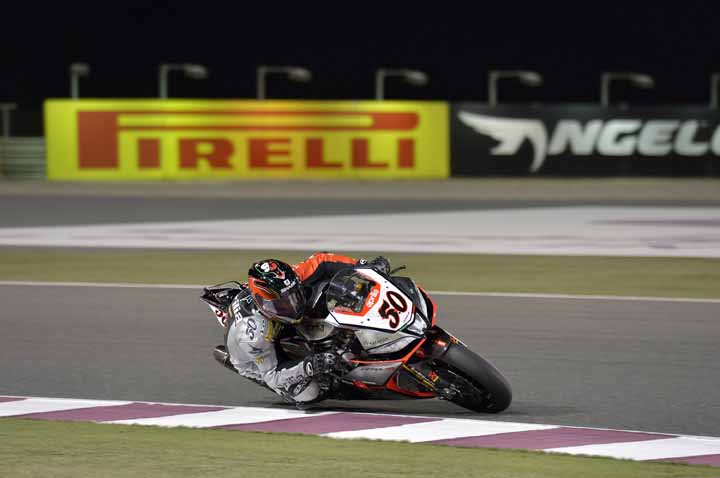