Superbike: Aprilia ready for the 2013 season as world champion

An extraordinary track-record: 51 world title victories in twenty years. The medal board of the Piaggio Group is even more impressive, with its brands winning a total of 101 world titles, making the Group the most successful European and Western motorcycle manufacturer ever. 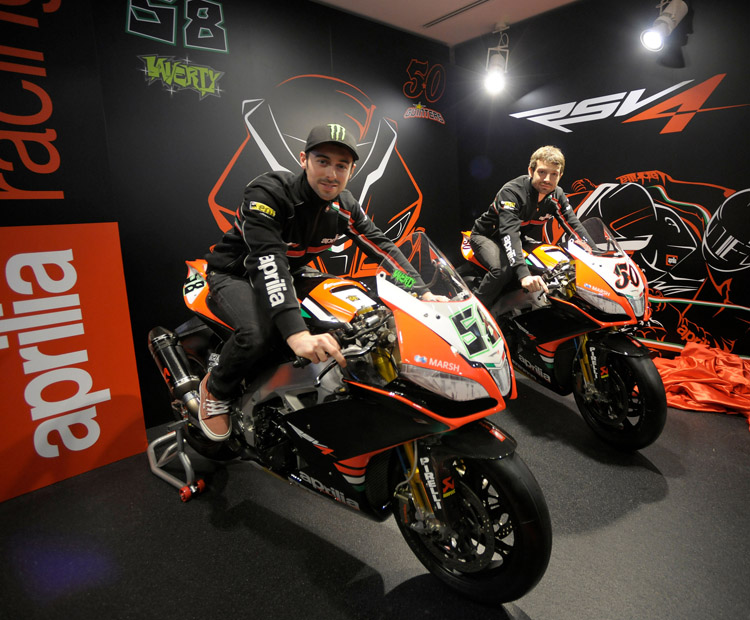 Milan, 7 February 2013 – 51 world titles, reigning world champion in Superbike racing, where it scored a double victory in the 2012 season winning both the Rider and the Manufacturer world crowns: Aprilia officially presented the 2013 season today in Milan.
For the world SBK championship, Aprilia is fielding the flagship bike in its range, the innovative four-cylinder RSV4, with its exclusive narrow-angle V4 engine. A bike that has been generous to the Italian team, immediately winning its debut race in 2009 and conquering four world titles (two double rider-manufacturer victories) in 2010 and 2012 with Max Biaggi in the saddle.

The arrival of the fast expert French rider Sylvain Guintoli, to flank Eugene Laverty, who has been confirmed, completes a team that is otherwise unchanged, under the orders of Technical and Race Manager Luigi Dall’Igna.
The RSV4’s recent victories have added to the lustre of an outstanding record: in its short history, Aprilia has won an impressive 51 world titles: 38 in the Grand Prix road racing championship (where it also holds a record of 294 GP race victories), 4 in the Superbike and 9 in off-road events. Including the Piaggio Group, of which Aprilia is part, the total score of championship wins rises to 101, a result that places the Group in the Olympus of the all-time most successful constructors.

“The importance of Superbike in our brand’s recent history has been strengthened by the renewed commitment of the official Team, which, on the strength of four world championship victories in the last three seasons, comes to the starting grid with a sole objective, to add to Aprilia’s extraordinary track record,” said Leo Francesco Mercanti, AD of Aprilia Racing. “The level of this competition, seen last year in a championship fought for up to the last bend, makes every success even more important and attests to the Piaggio Group’s commitment to developing road bikes delivering top-level performance and technology. The innovations and technical solutions we are bringing to the race track will then be made available to motorbike devotees. And we are bringing them to the track to win.”

Luigi Dall’Igna, the Aprilia Racing Technical and Race manager, said: “We are getting ready for the fifth season of our official participation in the World Superbike, a championship that absolutely reflects the Aprilia philosophy because it involves bikes based on a factory product. Both Eugene Laverty, who is well acquainted with the RSV4, and our new entry Sylvain Guintoli have the potential to achieve the ambitious results established by Aprilia tradition and by our status as current champions.

The RSV4 was just extraordinary in the 2012 season: all the riders who raced it, not just Max Biaggi, but Laverty and Davies too, rode it to victory. This season’s first test a few days ago in Jerez confirmed our expectations. A long tough season lies ahead, but we are fully prepared and motivated.”

Eugene Laverty, 26, from Northern Ireland, does not hide his ambitions: “With a season’s experience behind me, I can certainly aim at important results. I prepared well over the winter and during the first tests of the season I worked really hard together with the Team on the development of the RSV4. It’s a bit soon to start talking about goals and rankings, but I have to admit that my intention is to win the World Superbike.”

Sylvain Guintoli, 30, from France, is making his debut on the world champion bike: “It’s an honour to ride the world champion bike, for me this is the most important occasion of my racing career. A lot of people have asked me if I feel under a lot of pressure, but the fact that I want to do well and prove my worth in the World Superbike is far greater than any tension. What surprised me most about the RSV4 is that it felt immediately natural to ride. Straightaway I felt “at home”, despite having ridden bikes with very different features in the past. The RSV4 is fast, but more important it offers all the adjustments to enable it to be adapted to my riding style.”