Two days after the press launch in Mumbai, the official opening of the new Piaggio Group factory in Baramati (State of Maharashtra) to produce Vespa scooters for the Indian market.

Roberto Colaninno: “an event of enormous importance for our Group and for the two-wheeler sector: today the Vespa becomes a truly global vehicle.”

Powered by a new eco-friendly 60 km/litre engine, the Vespa developed specifically for the Indian market is based on the Vespa LX, the outright best-seller on the European two-wheeler market and the best-selling European two-wheeler in the USA. Marketing of the scooter is beginning in India’s 35 largest cities, through a distribution network already comprising 50 exclusive Vespa dealers.

The initial production capacity of the new plant in Baramati is 150,000 vehicles/year; capacity will double to 300,000 scooters/year by the end of 2013. 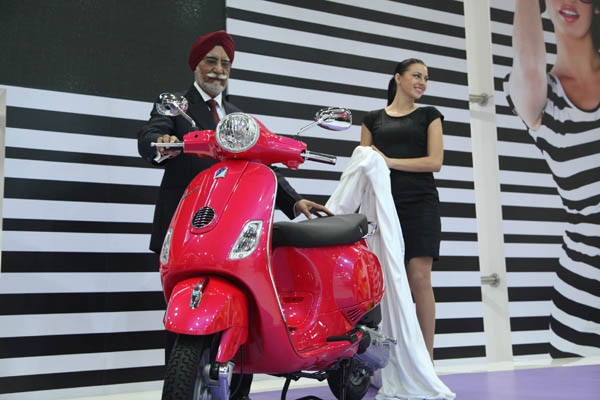 Mumbai (India), 28 April 2012 – The Vespa, the world’s most famous and best-selling scooter, is making its official debut on the Indian market, sealing the Piaggio Group’s move into a new phase of its globalisation strategy.

Two days after the press launch in Mumbai, the official opening was held today of the new Piaggio Group plant in Baramati (State of Maharashtra), which is to produce Vespa scooters for the Indian market.

Roberto Colaninno said: “Today is an event of enormous importance for the Piaggio Group and for the entire two-wheeler sector. With its entry on to the Indian market, the Vespa becomes a truly global vehicle, targeting a new class of young, highly educated Indian consumers, who follow events around the world very carefully and keep a close watch on changing international lifestyles and consumer patterns. This is one of the reasons why the launch of the Vespa in India, a country with extraordinary potential, coincides with a completely new phase in our Group’s globalisation strategy: focus on the end customer on every major market where the Piaggio Group operates, attention to the specific needs and requirements of the various geographical areas, product marketing and technical development geared to delivering state-of-the-art products in every market. Only thanks to this approach can we maximise the success of our best-known brands and develop innovative new product ranges.”

The Vespa production plant opened today is the third factory set up by the Piaggio Group in Baramati, a city in the Pune district of the State of Maharashtra. The area is home to the manufacturing complex of Piaggio Vehicles Private Ltd., a wholly owned Piaggio Group subsidiary which already produces three-wheel goods and passenger vehicles (and is the market leader in India, with annul sales of more than 220,000 vehicles) and, in an adjoining facility, scooter engines for the Vespa and diesel and turbodiesel engines for the commercial vehicle ranges produced by Piaggio in India and in Italy, in Pontedera. With the opening of the Vespa production plant, the Piaggio Group industrial complex in Baramati now provides jobs for approximately 3,000 workers.

The new Vespa factory is located on an area of more than 150,000 square metres, including a covered surface area of 32,000 square metres. It handles the full Vespa machining cycle, from welding of the monocoques to varnishing and final assembly. The initial production capacity of the plant, which was built in just 14 months, is 150,000 scooters/year; capacity will be raised to 300,000 during 2013 as part of the Piaggio group industrial and commercial program.

The Vespa developed for the Indian market is based on the Vespa LX, in 2011 the outright best-seller on the European two-wheeler market and the top-selling European two-wheeler in the USA. Compared with the version produced in Italy and marketed in Europe and the USA, and the model produced by Piaggio Vietnam, the Indian Vespa features a number of specific ergonomic adaptations, offers easier access to the engine and tyres, and, above all, is equipped with a brand new 125 cc 4-stroke, 3-valve engine. This completely new motor was developed by the Piaggio Group specifically for its debut on the Indian two-wheeler market: a state-of-the-art, no-noise, eco-friendly unit with significantly low exhaust and noise emissions, and exceptional fuel efficiency, with one of the lowest fuel consumption levels in the world and a range of more than 60 km on a litre of fuel.

Marketing of the Vespa, at 66,600 Indian rupees (equivalent to approximately 1,000 euro/1,260 USD at the current exchange rates), is currently beginning in India’s 35 largest cities, through a distribution network already comprising 50 exclusive dealers, on the basis of a coordinated image system dedicated entirely to the Vespa brand.

The Piaggio Group’s entry into the two-wheeler business in India opens up a completely new premium product segment, for customers looking for two-wheelers with a unique style and personality combined with cutting-edge technology. The global positioning developed by the Piaggio Group for the Vespa brand underpins the extraordinary sales success of the scooter, which sold more than 150,000 units in 2011. As a comparison, worldwide Vespa scooter sales in 2003 were around 50,000.

Entry on to the Indian two-wheeler market is a fundamental step in the Piaggio Group strategy targeting strong growth on the emerging markets. The Group is projecting global sales of more than one million vehicles in 2014 and significant growth in revenue, with a consolidated net sales target of approximately 2 billion euro for financial year 2014. In terms of revenue breakdown, in 2014 the Piaggio Group expects Asia to account for 50% of revenues, compared with 8% in 2003 and 25% in 2009.