Home > Archive > Press > Piaggio Group: at Motodays with Aprilia in the lead in World Superbike

Piaggio Group: at Motodays with Aprilia in the lead in World Superbike

Marco Melandri and Sylvain Guintoli, Aprilia Racing riders in the World Superbike championship, open the Roman motorcycle show with their fantastic RSV4 Factory Racing SBK bikes in the new silver coloured livery which shot into the lead of the Rider and Manufacturer championships at the first round in Australia.
All the major innovations for 2014 from the Piaggio Group will be on display at the Motodays 2014 show: from the 2014 model year Moto Guzzi V7 range to the Aprilia Tuono V4 R ABS to the extraordinary Vespa 946 and the brand new Vespa Primavera, as well as the début of the Beverly S, a gritty version of the Piaggio high wheel scooter best seller in the classic 125 and 300cc engine sizes.
Rome, 06 March 2014 – The Piaggio Group launched the Motodays show at Rome today (open from 6 to 9 March), with the participation of the successful 2014 World Superbike Aprilia Racing riders.
Marco Melandri and Sylvain Guintoli arrived at the Roman motorcycle show just after the first two WSBK races on the Australian circuit at Phillip Island. In this opening round Aprilia, reigning Manufacturer world champion, was a key player in both races with the factory RSV4s. Thanks to the Race 2 win brought home by Guintoli – also the Superpole winner – and the second place that Melandri took in Race 2, the first round of World Superbike took the skilled French rider to the lead in the championship Rider standings, and placed Aprilia at the top of the Manufacturer championship. 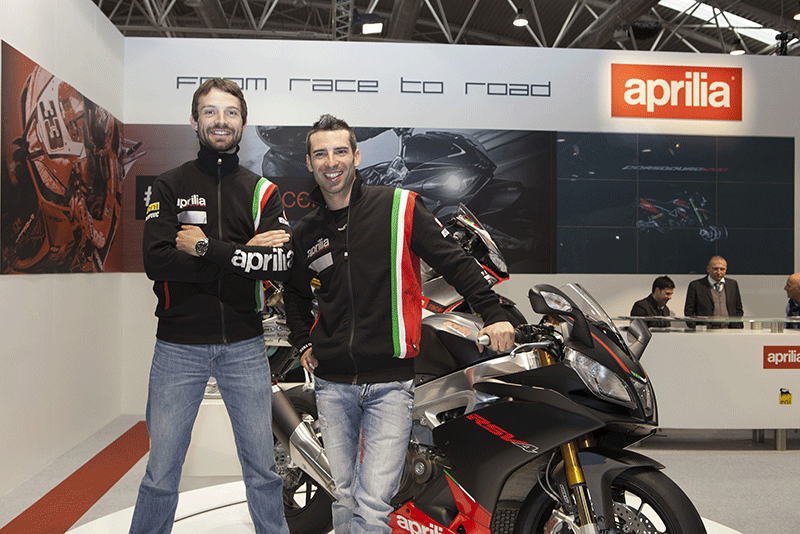 The Aprilia riders opened up Motodays to then meet with their fans and all motorcycle enthusiasts at the Piaggio Group's large exhibition space in Pavilion 3, stand B10. Along with them visitors will be able to see the Aprilia RSV4 Factory which made its début with a win and two podiums in the brand new silver colour scheme at Phillip Island.
Marco Melandri and Sylvain Guintoli were on hand to christen the many new Piaggio products which will be in Rome both with the motorcycle brands (Aprilia and Moto Guzzi), and with the brands dedicated to the scooter world such as Vespa, Piaggio and Scarabeo.
Marco Melandri: “At Phillip Island things went halfway well because we started off the season with a nice second place, but in Race 2 I made a mistake that kept me from getting close to the podium. I'm growing though and the feeling with the team and the bike is improving day by day, so I am confident that already by Aragon I'll be able to give 100%. Contact with the fans is very important. That's what feeds our motivation. The atmosphere here in Rome is fantastic. You can feel a lot of passion and that is a good sign for our world. After EICMA this is the second event where I have participated in the Piaggio Group stand and I must say that Vespa, both with the exclusive 946 and the brand new Primavera, truly has a charm like nothing else in the world.” 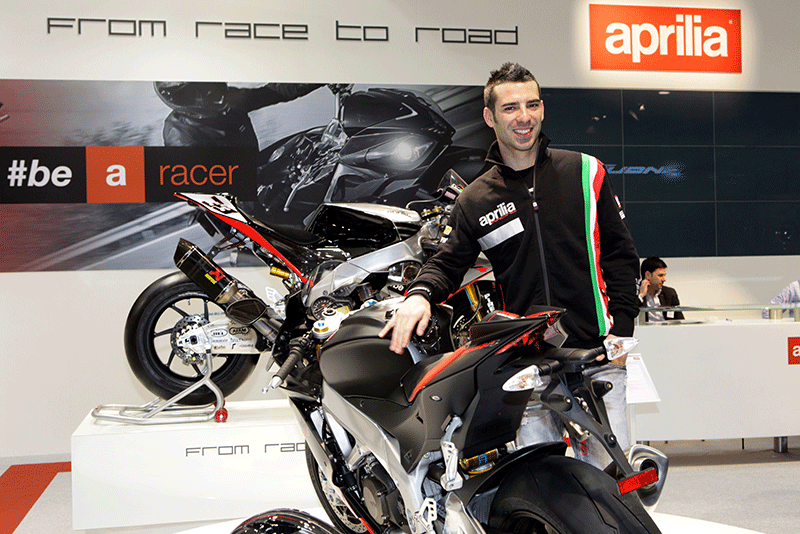 Sylvain Guintoli: “We are coming from a race, the Australian round, where we got off on the right foot. I was coming off a long winter without any testing and with some doubts on how my injured shoulder would hold up. The podium and the win in Australia convinced me that the worst has passed and that we will definitely be in the game for this WSBK season. Meeting the many fans and enthusiasts who came out today really gets me pumped up. We need all the positive energy we can get since our next race is one month away. I also saw some very nice bikes and my favourite is still the Tuono V4. It has the same engine as the Superbike I race with and I own one that I have fun riding on the English roads. It's fast, easy to ride and has an incredible sound. It is truly a sport thoroughbred.” 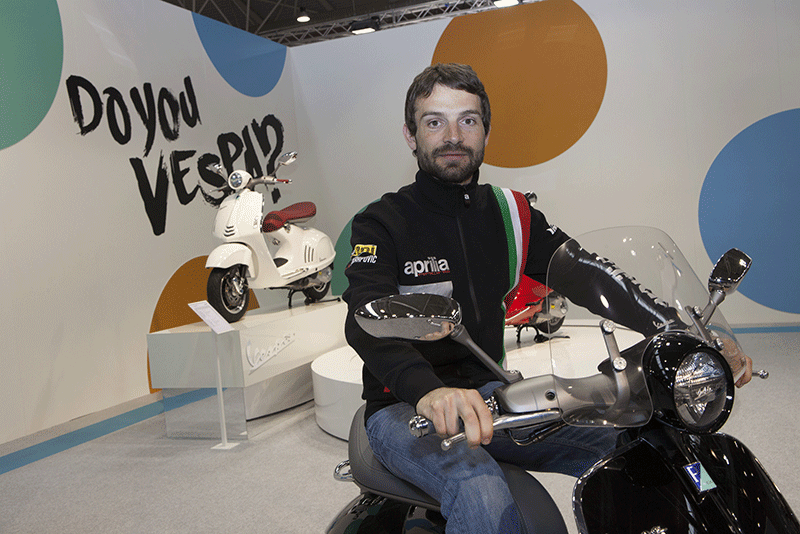 The major news for the Piaggio Group bike and scooter brands this year includes:

Alongside the Vespa 946 - the most prestigious, costly and technologically advanced model ever built which also sums up almost seventy years of the history of Vespa style - a legend is reborn: the Vespa Primavera returns.

New body, new wheel sizes, new front suspension, new electronic injection system for record fuel economy and emissions, the Primavera is an ultra-modern Vespa, designed to provide a mobility experience in the elegance of an exclusive design but without sacrificing convenience.

The new Vespa Primavera represents an important evolutionary landmark in Vespa history. In the design phase every solution was aimed toward increasing the comfort level, safety and riding pleasure compared with the previous - and even recent - generations in order to continue an evolution that, for almost seventy years and after more than 18 million vehicles sold in five continents, makes Vespa the youngest and most beloved two-wheeled vehicle in the world.

The Piaggio brand introduces the Beverly 300S for the first time in Rome, a brand new version of the “high wheel” medium engine size best-seller that stands out for the new black and satin finishing, a new look for the wheel rims, mirrors, engine cover and leg shield back plate plastics, that make the new Beverly more gritty and attractive. Beverly S is also available in a 125cc engine size version. Both are ultra-modern 4-stroke single cylinder engines, liquid cooled and electronically fuel injected. These are latest generation powerplants capable of superlative performance while at the same time respecting the environment, in compliance with the strictest emissions regulations. 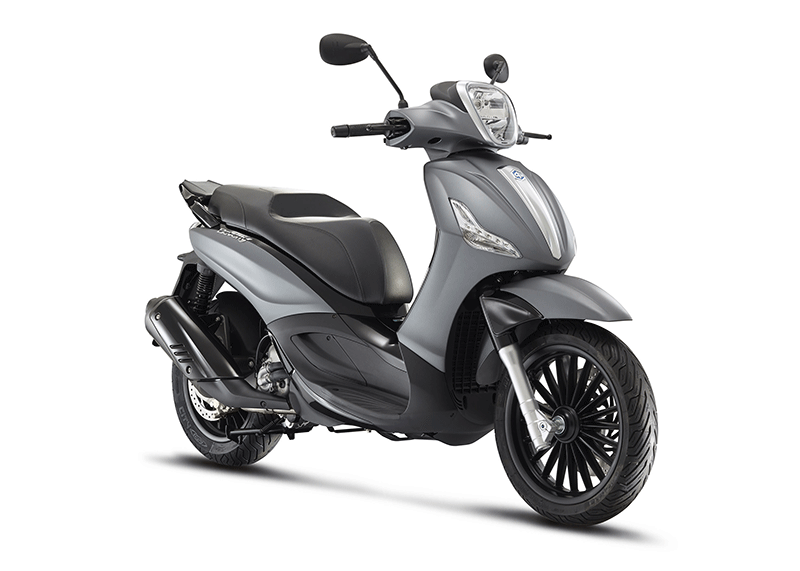 In addition to the California 1400 range, the emblematic model from the Mandello del Lario based manufacturer, Moto Guzzi introduces the 2014 MY V7 range.

The common new feature is the technical template: a new flywheel in an oil bath replaces the previous dry alternator, slightly modifying the front end of the 90° V-twin engine thanks to a new cover with a more compact and attractive look.

MG V7 Stone: Eclectic and essential, the V7 Stone gets a makeover that enhances its minimalist nature. The guiding concept was to convert the most accessible of the V7 range into a total-black look, transforming the chrome to black with the only exception being the engine, which maintains the chromatic shades of the metal alloys and the brilliance of the exhaust system. The rest of the bike, from the mirrors to the shock absorbers, from the mudguards to the wheels and even the side panels is dominated by black. With a look like this one all you need to do is change the colour of the tank to alter the bike's personality: sporty in the new “Rosso Corposo”, elegant in the satin finish “Verde Agata” and metropolitan in the popular “Nero Ruvido” 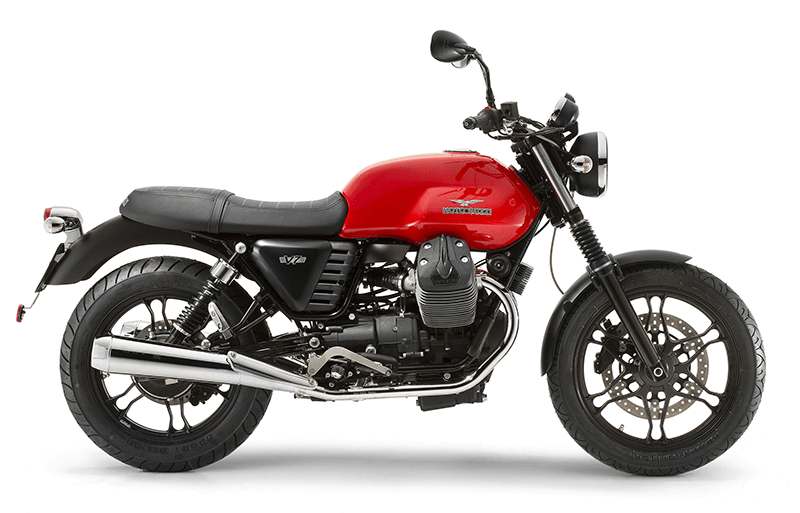 MG V7 Special: This is the V7 model that comes closest to the original spirit of its original predecessor, beginning with its graphics, called “Essetre” (S3) like the 1974 V750 that introduced disc brakes for the first time on a Moto Guzzi. The V7 Special is available in two basic colour schemes: metallic silver with black strips, elegant and refined, or in black with orange strips which faithfully recall the colours of its famous ancestor. The tank on both bears the historic embossed logo and the wheel rims are also black finish instead of chrome. Unlike the Stone and the Racer, the V7 Special has a fork stanchion protector instead of the dust boots that are fitted on its sister models.

MG V7 Racer: Produced in a numbered edition as evidenced by the celebratory plate located on the upper steering yoke, the V7 Racer is now in its third edition. It is immediately recognisable: this model also boasts a new total-black look on the side panels, mirrors, the silencer support bracket and the footpeg protection.

The result is a spectacular contrast with the bright chromium 22 litre fuel tank. In keeping with the numbers theme, the number “7” remains on the top and tail fairings (which in the Moto Guzzi world was a favourite for the 250 class world champion Enrico Lorenzetti), but this time it is chromium instead of white. The single seat saddle is also new (although a two-up saddle and passenger footpegs are available on request), covered in Alcantara and Skai to match the leather strap personalised with the Moto Guzzi logo that decorates the crest of the tank.

The red frame is still spectacular, itself inspired by the legendary first V7 Sport series with CrMo frame and the result of a special painting treatment extended to the hubs, wheels and swingarm as well, which accentuates the architectural purity of the frame. Moto Guzzi is also written in red where it appears on the wheels, exactly like the most recent California Custom.

Tuono V4 R ABS, the super naked par excellence derived directly from the exceptional RSV4 multiple SBK world champion. For the 2014 version of the Tuono V4 R there are many new features compared with the predecessor, including the advanced ABS racing system that can be adjusted to 3 sensitivity levels or disabled altogether. In addition to this the bike has more maximum power and torque (170 HP) with its prestigious 65° V4 engine, a further evolution of the already super-refined APRC electronics control package, a new and more spacious fuel tank (18.5 litres) which is also better shaped in order to provide the rider with a better riding feeling. Also, in order to enhance comfort and street riding, the saddle padding has been revisited and the suspension was replaced with new elements that are calibrated to be more “street oriented”, although, being fully adjustable, they allow the rider to find the best possible setup to take full advantage of the capabilities of the Tuono V4 R ABS chassis on the track. It is available in the more elegant white or an aggressive black.

RSV4 R ABS and RSV4 Factory ABS represent the best a biker can strive to be in the super sport bike segment. The Aprilia RSV4 is the model that is closely derived from the 2013 WSBK Manufacturer World Champion and 5-time World Superbike Champion in the last four seasons.

On the occasion of the first round of the 2014 world SBK season at the Phillip Island circuit the new 2014 RSV4 SBK silver livery was introduced. These extraordinary bikes were stars in Australia with Guintoli's victory (now leading the Riders Championship) in Race 2 and Melandri's second place in Race 1. Aprilia is also in the lead for the 2014 Manufacturer Championship.

There is no more competitive, more advanced, more refined and efficient bike than the Aprilia RSV4. This is demonstrated not only by SBK results, but the numerous victories in all the comparative reviews in the sector organised by the most authoritative magazines also attest to this fact, where the Aprilia RSV4, even in its strictly original configuration, is the bike to beat, no matter what track it is on or who is riding it. The most recent version has even more maximum power and torque (184 HP) expressed by its narrow V4 engine (the only one of its kind produced anywhere in the world), an even more advanced APRC electronics system, a new and more efficient braking system and a different, more spacious and ergonomic fuel tank. New and attractive graphics decorate both the RSV4 versions in 2014. RSV4 R ABS is available in two colour schemes: Nero Opaco or Rosso Formula. The RSV4 Factory ABS, the most sophisticated and valuable of the two, is available in the new Nero Assoluto colour scheme.