Making their début at the Milan show:

Milan, 8 November 2016 – The Piaggio Group will be at the 74th edition of the two-wheel show to consolidate its position as the number one European and Italian two-wheel group.

The Group led by Roberto Colaninno has registered increasing profits in the first nine months of 2016, particularly in the “high wheel” segment, thanks to the new Piaggio Liberty, the Beverly and the new Piaggio Medley ABS (that entered the market segment to increase the share for the Group's vehicles), whereas the Vespa brand has grown particularly in the European market, where it has registered +3.6%.

The Group's motorcycle sector is also doing well, thanks to the 8% sales increase for Moto Guzzi (partly generated by the new V9 Roamer and Bobber and the initial sales of the MGX-21), and Aprilia, particularly the super sport bikes in the Tuono V4 family, that have registered a 43.4% increase. 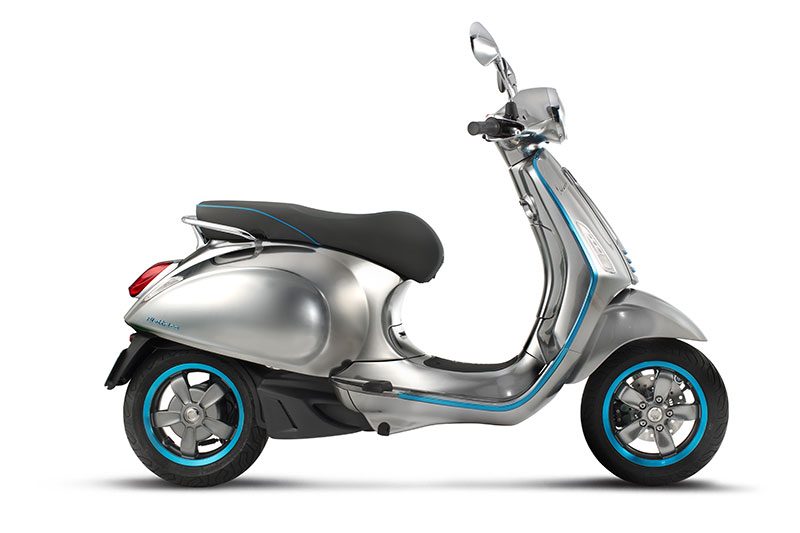 The mobility of the future will be unveiled at Eicma 2016.

Introducing the Vespa Elettrica project, the new mobility solution according to the most elegant and beloved two-wheeled brand in the world that takes a step into the future in complete consistency with the values that have accompanied its history.

The Vespa Elettrica project confirms the Piaggio Group's commitment, not only to people mobility, but to a desire to change the way in which people move.

Because of the excellence of this project, the Piaggio Group is assessing the most advanced players in the sector on a global level to develop innovative technological electric motor solutions together. This concept will be translated into the final version of the Vespa Elettrica, for which production and sales are planned for the second half of 2017.

The Electric Vespa will, first and foremost, be a true Vespa, bringing the very latest in electric technology to a vehicle that will retain all the features that have been vital to its success. The style, agility, ease of use and riding pleasure will be the same as the Vespa we have always known, with the addition of technological and innovative connectivity solutions. A perfect mix of excitement, technology and environmental friendliness that only Vespa can create. As it has always done in its first seventy years of history. 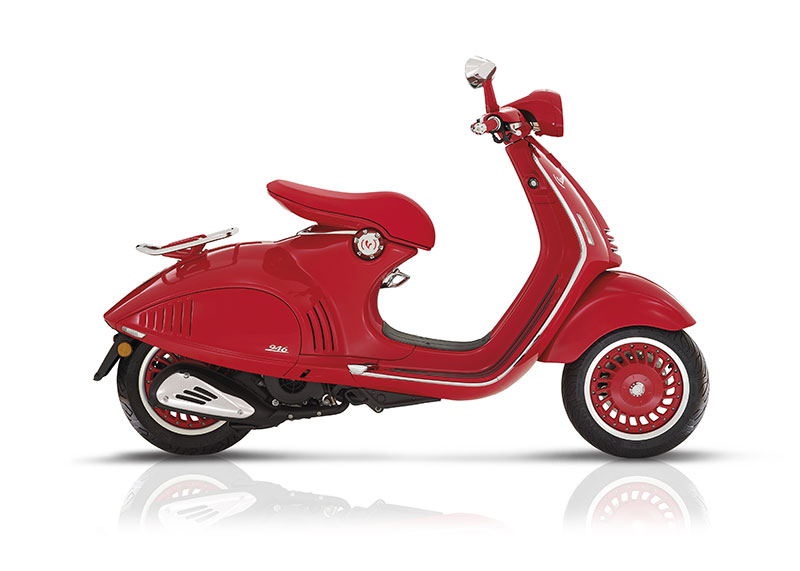 A collaborative partnership between the Piaggio Group and (RED) has created the (VESPA 946) RED – an all-red version of the classic scooter, sales of which will go towards initiatives fighting AIDS, tuberculosis and malaria.

The (VESPA 946) RED has been designed with elegance and style in order to raise awareness of this serious problem. It provides the chance to join the battle against some of the most difficult diseases mankind must face.

This most exclusive and most valuable Vespa, a model born to celebrate the beauty of a mode of transport that has achieved legendary status, is also the only product in the automotive world to have been chosen by (RED). This is a record and a privilege that the Vespa 946 is honouring by turning every aspect of itself red, which has never been done before.

Founded in 2006 by Bono and Bobby Shriver, (RED) has donated $360 million to the Global Fund to Fight AIDS, Tuberculosis and Malaria. This money has gone to Ghana, Kenya, Lesotho, Rwanda, South Africa, Swaziland, Tanzania and Zambia; 100% of its resources have been invested in Africa to fund initiatives aimed at combating HIV/AIDS. (RED)'s donations to the Global Fund have had an impact on over 70 million people and been used to provide preventive measures, treatments, counselling, HIV tests and assistance services.

For each (VESPA 946) RED sold, $150 will be donated to the Global Fund and the fight against AIDS. This valuable and substantial donation will enable (RED) to guarantee over 500 days' worth of life-saving medical treatments for HIV and help prevent mothers infected with the virus from passing it on to their unborn children. 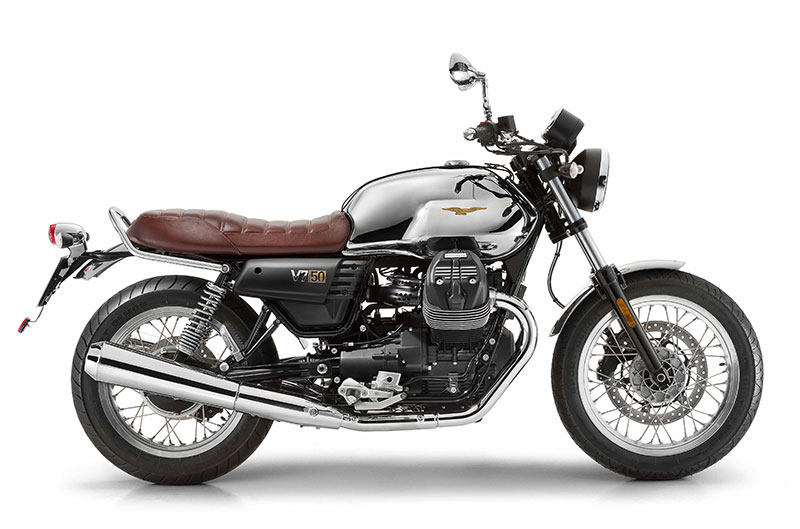 To celebrate the fifty year anniversary of the first model, Moto Guzzi introduces the V7III. The third generation of the globally recognized and most beloved Moto Guzzi has been entirely revamped, leaving the originality and authenticity typical of this iconic motorcycle unchanged.

Maximum power has increased 10%, thanks to the introduction of a new twin-cylinder engine, but increasing performance was not the main objective driving the V7 revamping. The third generation of the “seven-fifty” from Mandello will continue to be the Moto Guzzi entry-level model, easy to ride, with the most contained size and weight in its category, but at the same time with a strong and authentic character, typical of all Moto Guzzi bikes, much of which is shown off by the transversal V-twin engine, a one-of-a-kind configuration. The primary goals that led this evolution had to do with style, standard equipment and performance on the road, in other words, aspects that influence the pleasure of owning and riding a V7.

V7 III is available in the three well-known and popular versions, Stone, Special and Racer that, compared with the past, now take on stronger connotations and differ more from one another and now Moto Guzzi pays homage to fifty years of the V7 model by introducing a fourth version, called the Anniversario, a numbered edition limited to just 750 units, characterized by brand new and exclusive details.

The original Moto Guzzi accessories range, already quite rich for the V7 II, was created as a supplementary part of the project and it has been expanded even farther. The V7 III therefore lends itself exceptionally well to customization, so you can create your own made to measure special, like a tailor fitted garment. 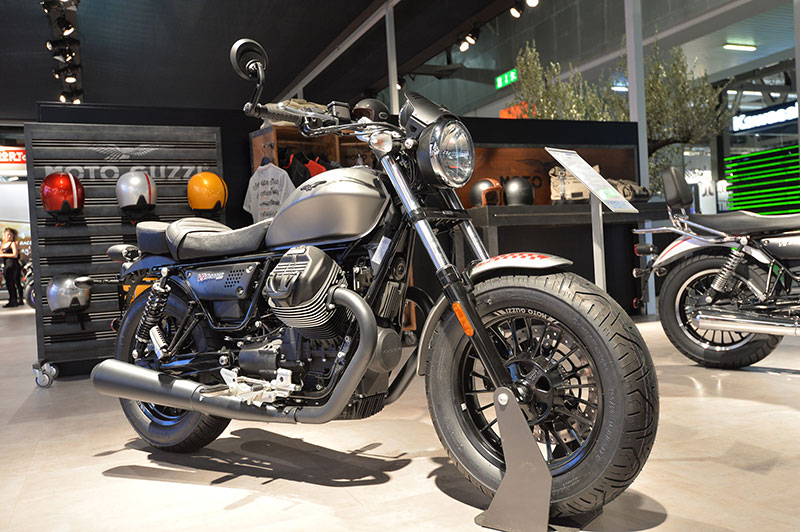 The Moto Guzzi V9 motorcycle family evolves under the sign of comfort: V9 Roamer and V9 Bobber, the lightweight easy cruisers, easy and thrilling to ride, are now more comfortable, ready for the voyage that is in the soul of every eagle from Mandello

V9 Roamer is the elegant and universal custom; V9 Bobber represents the bold and essential Moto Guzzi soul. They both stand out because of the exceptional quality of their components and the painstaking attention to detail and they are powered by the Moto Guzzi 850 ​​cc twin-cylinder Euro 4 engine with unprecedented torque, smoothness and responsiveness that contribute to enhancing the ride for these two Italian cruisers. The 2017 V9 versions are the result of the constant perfecting that Moto Guzzi dedicates to its bikes. Roamer and Bobber are now distinguished by a big difference, with two clearly distinct personalities: one more touring and the other sportier. Both evolve under the sign of comfort and a focus on long trips, introducing different riding positions, more comfortable saddles and an entire range of accessories dedicated to touring. 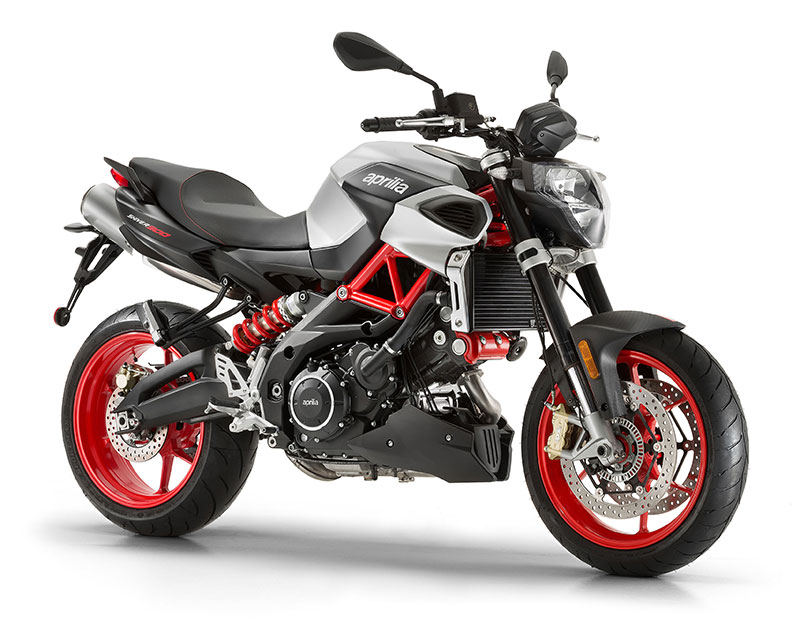 The naked Aprilia grows in displacement with a new Euro 4 twin-cylinder capable of more than 95 HP and 90 nm of torque. The new performance is combined with an absolutely top shelf frame for a rideability that raises the bar to new heights in the naked sport bike segment An intuitive, powerful, agile and technological bike is born in the best Aprilia tradition, dedicated to absolute riding pleasure.

The new Shiver 900 increases in performance, thanks to the new 900 V-twin engine, capable of increasing, not only the power, but more importantly, the maximum torque delivered at any rpm at top levels for its category. More power and more character that translate into great riding satisfaction without sacrificing the ease and comfort that have always been characteristics of the Aprilia Shiver. It stems from a bike that has made fledgling and expert riders alike fall in love, thanks to its chassis architecture that, in the best Aprilia tradition, draws on the know-how of a manufacturer that has won 54 world titles in its brief history and that currently has bikes in premier competitions like MotoGP and Superbike.

For the first time, the Aprilia Shiver 900 now has an advanced traction control system that increases safety while taking riding pleasure to maximum levels. The Aprilia Shiver 900 will also be available in the limited 35 kW power version for riders with an A2 driver's license. 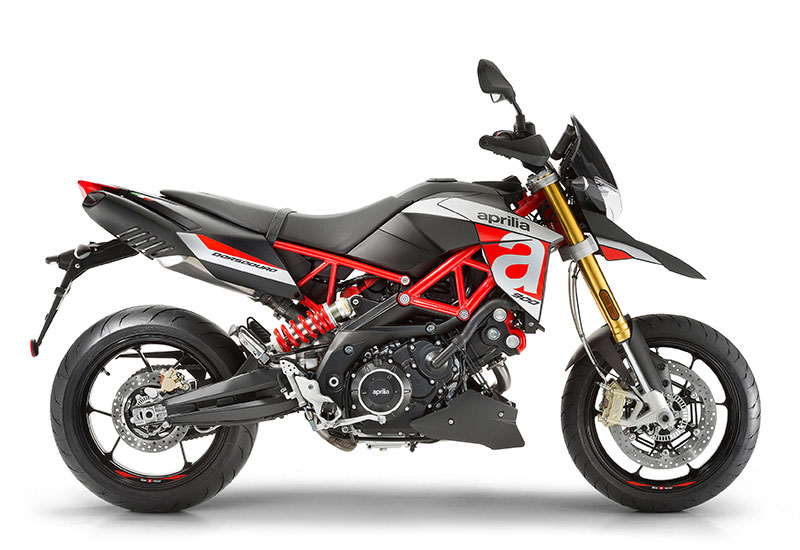 The fun bike from Aprilia evolves with the sole objective of providing maximum riding fun. More performance from the revamped twin-cylinder engine, a tighter ride and better handling from the refined chassis architecture and the best available technology.

The new Dorsoduro 900 is born out of Aprilia's solid tradition in this motorcycle segment and it is a true thrill generator. The exclusivity is also due to its original and innovative technical choices, like the mixed steel trellis/aluminium plates frame with excellent handling and tight cornering characteristics. The 90° V-twin engine puts a smile on the rider's face every time the throttle is twisted, thanks to the new characteristics of maximum torque and power that amplify its personality. The fine electronic management that includes, besides the Ride-by-wire multimap accelerator, traction control and ABS, complete the technical equipment on the Dorsoduro 900.

Electronic engine management is now handled by the new and more powerful Marelli 7SM ECU that dialogues with the new full Ride-by-wire electronic accelerator system, completely built into the throttle grip. A new Kayaba fork makes its début, 450 grams lighter, adjustable in spring preload and better capable of withstanding the stress of sport riding and absorbing bumps on the road surface. The overall improved performance of both the Dorsoduro 900 suspension systems is also due to the new pair of three-split-spoke wheels, more than 2 kg lighter than those that equipped the Dorsoduro 750.