The high wheel scooter, among the most loved and sold the world over - more than 800,000 - has been greatly renewed.
Exceptionally low consumptions and increased performance thanks to the new modern 3-valve injection engine.Renewed chassis, improved ergonomics and a higher load capacity: the new Piaggio Liberty 3V is the newborn star in its segment.

With more than 800,000 sold the world over Piaggio Liberty is one of the great stars of high wheel urban mobility. The great success it had right from the first day it was put on the market - in 1997 - can be put down to many factors all helping to reach the ambitious goal that has made Liberty a transversal vehicle, suitable for the public in general. Whether man or woman, expert or novice, of whatever social class or age, everyone has been able to appreciate its elegant and sober line, its lightness, easy to ride and manoeuvre from a standing position, the practical way of lifting it up onto its stand, the performance combined with low consumption and the vast range of engine capacities. 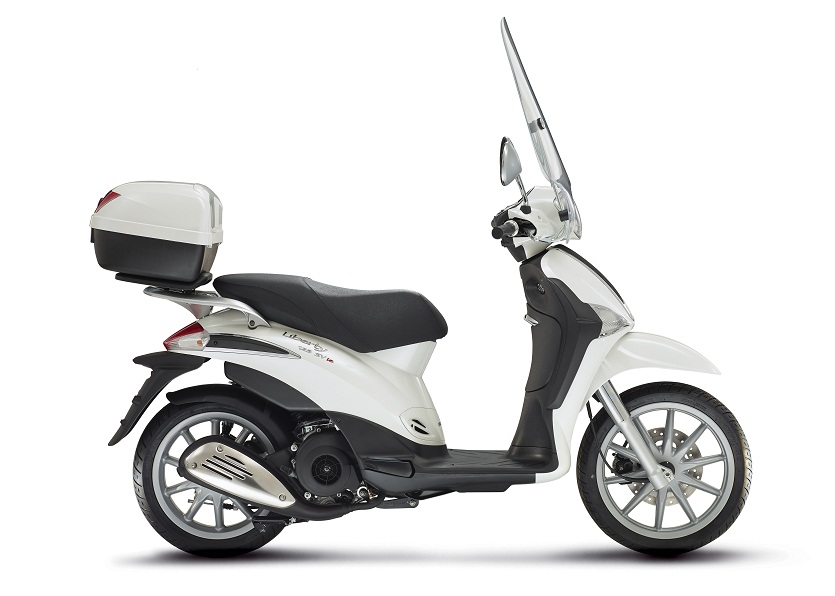 It is now Piaggio's best high wheel seller, in the 125 and 150 cc categories, it has been greatly renewed, especially the chassis and engine: safer, more comfortable, greater performance, more room and drastically reduced fuel consumption and running costs. The new Piaggio Liberty 3V was born to confirm itself as being the “best in the class”, strong with its more than ever unbeatable quality to price ratio.

Compact in size and elegant in its lines, the new Liberty 3V takes the baton from a model that distinguished itself for its sober and refined design. The new Piaggio medium engine capacity high wheeler confirms the salient features which have always distinguished Liberty, like the front headlamp, kindly triangular, and the "tie", in other words the cover of the centre leg guard in relief that goes from the handlebar down almost to the mudguard, by now an elegant distinguishing feature of the latest generation of Piaggio scooters. The chromed inserts enhance the finishes: the elegant embellishment on which the Piaggio logo is set, the profiles of the turn indicators with transparent cover, the handle of the glove compartment door and the fork stanchion guards. The easy to read instruments, including clock with date, speedometer, mileage counter and fuel level indicator all come together with far more modern graphics. The abundance of service LEDs is completed with the theft immobilizer, a standard feature on Liberty 3V. Besides the chromed parts, the new look of Piaggio Liberty 3V is further enhanced by details that denote the care taken such as, for example, the rear painted handle, the luggage rack for mounting the top box and the practical pull-out passenger footboards. 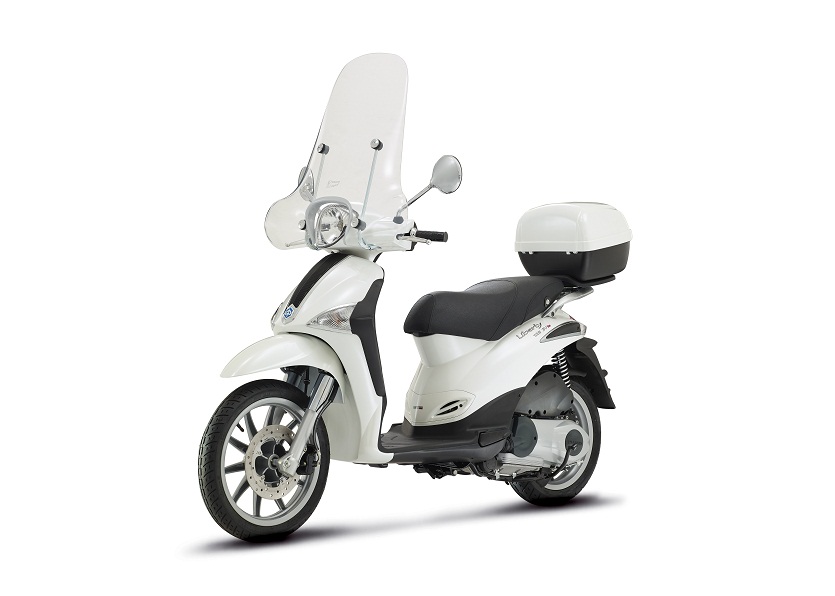 Even more room and comfort

On the new Liberty 3V the already considerable riding comfort and load capacity have been further improved by paying particular attention to the saddle surface and the compartment under it. The saddle is completely new with a more tapered shape along the sides so it is easier for everyone, whatever their stature, to put both feet on the ground; for the padding - both for the rider and the person riding pillion - a more comfortable foamed product is used, upholstered with a strong slip-proof fabric. The loading capacity of the helmet compartment has been increased 23%, going from 8.8 to 10.8 litres: this is because the battery has been moved, now in the legshield back plate box which can still be used to put small, everyday things in. Besides the helmet compartment, which can house the demi jet helmet without visor, Piaggio Liberty 3V also has a luggage hook in the leg shield back plate which is extremely useful and practical for carrying other objects, taking advantage of the practical flat footboard.

The frame in high strength steel tubing is a sturdy and tested structure, imparting excellent stability and manageability to Liberty 3V besides it being so easy to ride. But the vehicle's main values change due to the new dimensions of the tyres and wheel rims. Liberty 3V is shorter (1,920 mm against the 1,935 mm of the previous model), but it has a bigger wheelbase (1,345 mm against the 1,325 mm of the previous model) which increases the feeling of stability and safety at all speeds. The front wheel rim goes from 16 to 15 inches and takes a narrower tyre but with a higher shoulder (80/90 instead of 90/80); the rear one is still 14” and takes a 100/80 tyre (in place of the previous one which was 110/80). This solution is a proper technical choice that aims at improving dynamic performance, increasing manageability and fuel economy. The new dimensions of the rims and tyres mean optimising comfort in absorbing irregularities thanks to the front tyre's higher shoulder. Given the same braking system (consisting of a front 240 mm disc on which a double piston calliper works and a rear 140 mm drum) with the new wheel dimensions, braking is even more efficient, effective, reliable and modulable. 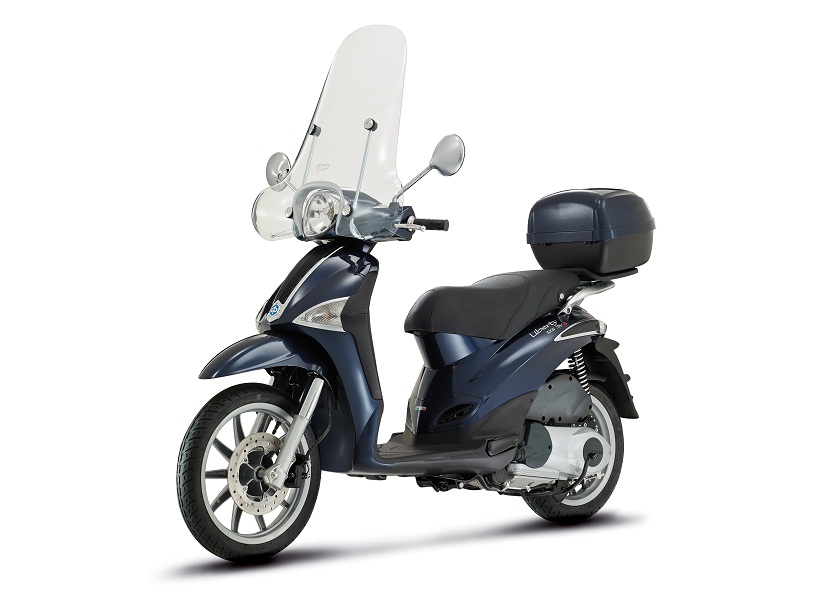 A highly modern engine, at the state of the art

The new Piaggio 3V engine, available in the 125 and 150 cc categories makes its début on the fourth generation of Piaggio Liberty and is considered state of the art in this segment. It is a single-cylinder 4 stroke air-cooled engine with 3-valve single overhead camshaft timing (2 intake and 1 exhaust) and electronic injection feeding, conceived and realised in the Piaggio Group's R&D centre, one of the most advanced at world level. A scrupulous study is behind the design to reduce friction and improve fluid dynamics in order to maximise performance and ensure fuel economy. Thus, the crankshaft, with reduced connecting rod button and bench capacity, the cam axle pivoted on the bearings and the roller rockers have allowed a considerable reduction in friction. The 3-valve timing is completely new, considered the most effective solution to increase performance and reduce consumptions as it improves intake, enhancing engine efficiency compared to the conventional 2-valve engines.

The cooling system has been accurately analysed to optimise its efficiency, reaching considerably less mechanical noise and absorbed power. The fuel injection system is extremely advanced which has automatic idle control and management of the continuous fuel mixture cycle with the introduction of an efficient Lambda probe. A latest generation ECU takes care of managing advance mapping, fuel mixture and timing. The engine used on the new Piaggio Liberty 3V stands out for its mechanical silence also thanks to the free-wheel electric starter which is quieter are more efficient.

Thanks to the 3-valve technology both torque and power values are improved compared to the engines of the previous generation. Thanks also to the particular efficiency of the transmission, fuel consumptions fall drastically: Liberty 3V 125 can cover 59 km/l at a speed of 50 km/h, while Liberty 3V 150 reaches 57 km/l in the same conditions. In addition, the Piaggio Liberty 3V running costs are reduced thanks to scheduled servicing intervals every 10,000 km.

A comprehensive range of accessories

Extraordinary attention has been paid to expanding the flexibility and ease of use of Piaggio Liberty 3V. Its town vocation is enhanced by the abundant range of accessories available, elegant and functional like the sturdy, shockproof, 4 mm thick, scratchproof windshield, the capacious top box coloured to match the bodywork, the leg cover, the mechanical anti-theft device and the vehicle cover to which the new side stand with safety sensor is added that inhibits the engine starting when it is out.