A genuine passion for customising a unique brand like Moto Guzzi has a natural outlet at Motor Bike Expo, where the renewed V7 range can be seen side by side with the many accessories of Moto Guzzi Garage and exclusive specials created by Italy's top customizers 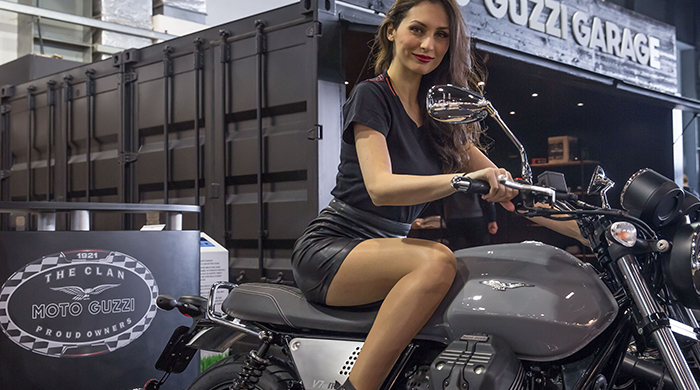 Verona (Italy), 18 January 2018 – Today is the first day of Motor Bike Expo, the top European show for the custom and special motorbike industry, organised in Verona and open until Sunday 21 January 2018. The event sees the attendance of two of the world’s most famous motorcycle brands, standard-bearers of the values promoted by Motor Bike Expo: on one hand, the fascination of Moto Guzzi, an endless source of inspiration for leading customizers, on the other the unrivalled sporting pedigree of Aprilia, which has applied the technological knowhow acquired through its racing activities to turn out unique two-wheelers like the RSV4 superbike and the hypernaked Tuono V4.

Motor Bike Expo is an unmissable opportunity for a close-up encounter with Moto Guzzi and Aprilia, as well as the exceptional offers and engagement activities organised by the respective communities, The Clan and #bearacer Club.

The Moto Guzzi space at Veronafiere (Hall 4) is a tribute to the classic motorcycle and to personalisation. The authenticity of Moto Guzzi is reflected in the latest entries from the eagle brand: the new V7 III Carbon, Milano and Rough, joined by the V7 III Racer, represent the multifaceted personality of an iconic bike, shown here in three new versions each with its own specific style and spirit. Exhibits also include the V9 Roamer and V9 Bobber, with further style and finish enhancements, the timeless California Touring cruiser and the stunning MGX-21, the anti-conformist bagger powered by the 1400 cc big block, the largest V-twin engine ever produced in Europe.

The passion inspired by Moto Guzzi bikes is also expressed in the infinite possibilities of personalisation, fuelled by an outstanding range of original accessories to enable every rider to create their own made-to-measure special. Fans can test their expertise against the extraordinary creations in Verona thanks to Moto Guzzi Garage and its online virtual space: www.garagemotoguzzi.com.

The Moto Guzzi stand presents a number of exceptional specials, interpreted and radically modified by some of the best-known preparers. They include the V7 created by South Garage for the Proraso brand, a thrilling preview to the special “Barber Shop”.