New technical details and attractive colour variants for the three versions – Stone, Special and Racer – of the "seven-fifty" from Mandello del Lario

Moto Guzzi in a consistent growth trend: sales up over three consecutive years, +51% compared to 2010

Mandello del Lario, 18 April 2014 - The new Moto Guzzi V7 range is on the beautiful roads of Mandello del Lario: three models distinguished by three very different finishes which correspond today to three even more marked and personal personalities. On the tried and true technical platform of the V7 three new versions of the Italian "seven-fifty" are born with a technical template in common: a new flywheel in an oil bath replaces the previous dry alternator, slightly modifying the front end of the legendary cardan final drive 90° V-twin engine thanks to a new cover with a more compact and attractive look. 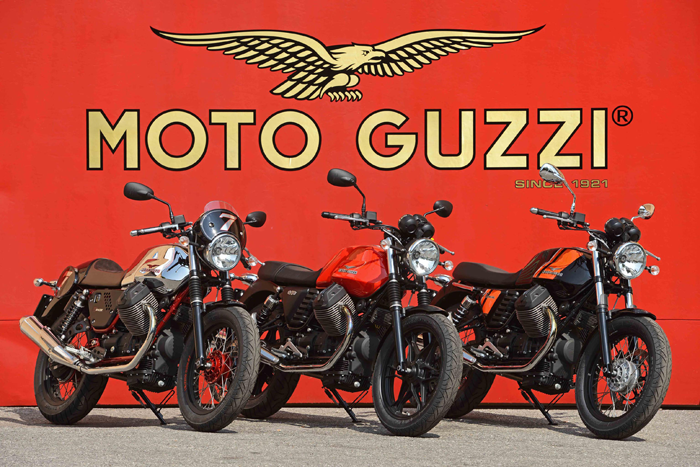 Immediately recognisable, agile, easy to ride in any conditions, the V7 is one of the feathers in the cap for the Moto Guzzi range that goes all the way up to the imposing California 1400 Custom and Touring flagships and it is one of the protagonists of the success of the "Eagle Brand" which, going blatantly against the European two-wheel market trend, has recorded a consistent increase in bike sales for three consecutive years. In fact, Moto Guzzi global sales volumes have gone from 4,500 bikes sold in 2010 to more than 6,800 in 2013, showing an increase of 51%. 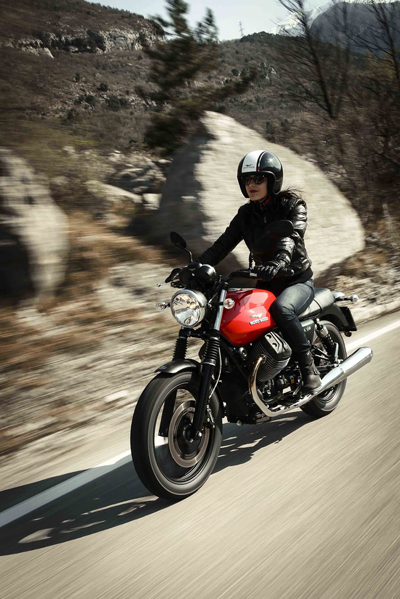 MG V7 Stone: Eclectic and essential, the V7 Stone gets a makeover that enhances its minimalist nature. The guiding concept was to convert the most accessible of the V7 range into a total-black look, transforming the chrome to black with the only exception being the engine, which maintains the chromatic shades of the metal alloys and the brilliance of the exhaust system. The rest of the bike, from the mirrors to the shock absorbers, from the mudguards to the wheels and even the side panels is dominated by black. With a look like this one all you need to do is change the colour of the tank to alter the bike's personality: sporty in the new “Rosso Corposo”, elegant in the satin finish “Verde Agata” and metropolitan in the popular “Nero Ruvido”

MG V7 Special: This is the V7 model that comes closest to the original spirit of its original predecessor, beginning with its graphics, called “Essetre” (S3) like the 1974 V750 that introduced disc brakes for the first time on a Moto Guzzi. The V7 Special is available in two basic colour schemes: metallic silver with black strips, elegant and refined, or in black with orange strips which faithfully recall the colours of its famous ancestor. The tank on both bears the historic embossed logo and the wheel rims are also black finish instead of chrome. Unlike the Stone and the Racer, the V7 Special has a fork stanchion protector instead of the dust boots that are fitted on its sister models.

MG V7 Racer: Produced in a numbered edition as evidenced by the celebratory plate located on the upper steering yoke, the V7 Racer is now in its third edition. It is immediately recognisable: this model also boasts a new total-black look on the side panels, mirrors, the silencer support bracket and the footpeg protection.

The result is a spectacular contrast with the bright chromium 22 litre fuel tank. In keeping with the numbers theme, the number “7” remains on the top and tail fairings (which in the Moto Guzzi world was a favourite for the 250 class world champion Enrico Lorenzetti), but this time it is chromium instead of white. The single seat saddle is also new (although a two-up saddle and passenger footpegs are available on request), covered in Alcantara and Skai to match the leather strap personalised with the Moto Guzzi logo that decorates the crest of the tank.

The red frame is still spectacular, itself inspired by the legendary first V7 Sport series with CrMo frame and the result of a special painting treatment extended to the hubs, wheels and swingarm as well, which accentuates the architectural purity of the frame. Moto Guzzi is also written in red where it appears on the wheels, exactly like the most recent California Custom.

Moto Guzzi is an Italian brand, the pride of the Italian motorcycling tradition: the historic Mandello del Lario plant has manufactured some of the most attractive motorcycles in the world without interruption since 1921, also relying on suppliers concentrated in the Lombardy area for some of its components. Furthermore, of the 52 Lombardy suppliers, 21 are right in the Lecco province; renowned company names which are well established on a global level and which manufacture high quality parts for Moto Guzzi and other motorcycle and scooter brands in the Piaggio Group.