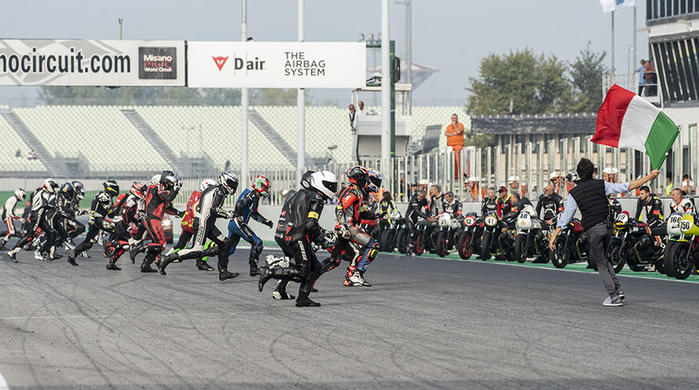 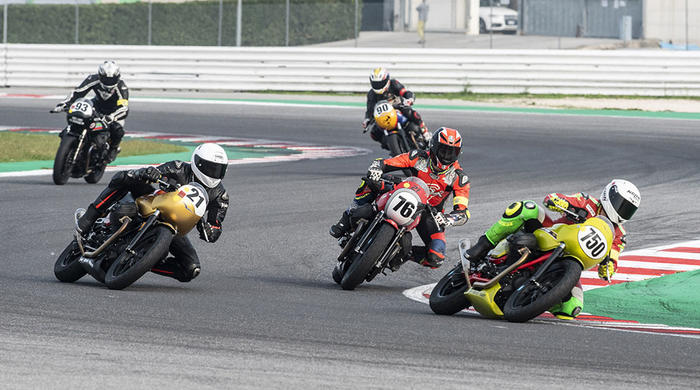 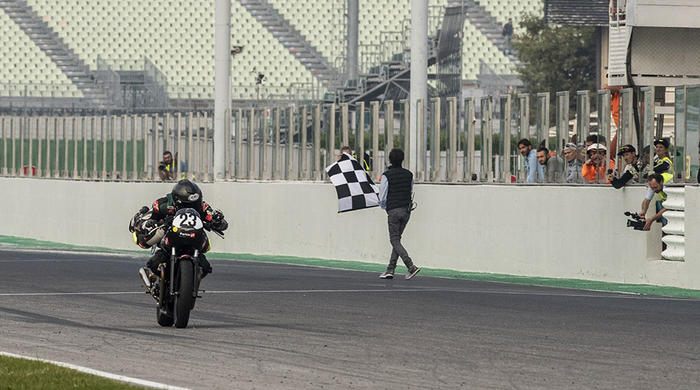 Misano Adriatico (Rimini), 13 October 2019 - Five different winners in five races and the final victory of the Trophy remained up for grabs all the way down to the very last metres of the conclusive race: at the Misano World Circuit, the Moto Guzzi Fast Endurance, the single-brand series dedicated to two-rider teams astride Moto Guzzi V7 III bikes equipped with the GCorse Racing Kit and Pirelli Phantom Sportscomp RS tyres, closed out a fantastic and thrilling opening season in the best of ways.

Coming out on top in the final “miniendurance” of the year was a pair of riders making their début in the Trophy on the ParkinGO Team, made up of Giuliano and Edoardo Rovelli, skilfully making their way into the race lead right after the first rider change, whereas in the frantic initial stages of the race, no less than six teams were protagonists of an extremely heated battle at the top. These included the two teams in the running for the final Trophy victory, Circuito Internazionale d’Abruzzo and Biker’s Island, with the latter gaining the upper hand thanks to the points earned from their third place, achieved after their direct rivals were sanctioned with a penalty due to a late rider change.

It was a well-deserved final victory for Samuele Sardi and Oreste Zaccarelli of Team Biker’s Island, earned by racing an extremely high-level season and topped off by the win in the Magione round in June. On the other hand, it was nothing doing for the team from Abruzzo and an outstanding Riccardo Mancini - who did the fast lap at 2’00”394 - this time paired with Daniele Sasselli subbing for his usual teammate Nicola Maccaferro, who is injured.

Also on the podium at Misano was 117 Racing Team (Matteo Giordani - Carlo Maderna), finishing second, whereas the special award for the team that gains the most positions from the first lap to the chequered flag went once again to Team Proraso (Roberto Ciovacco - Francesco Alberini), able to recover an amazing seven positions and already protagonists of a great comeback ride in the previous round in Adria.

There were also two special guests on the track having fun on the Moto Guzzi V7 III machines: Guido Meda, who shared a saddle with Gianfranco Guareschi, finishing with an outstanding fourth, and DJ Ringo, in his third appearance in the Trophy after already racing in the Magione and Adria rounds.

In the saddle to race team The Clan’s V7 III was the latest pair of riders voted for online by the official Moto Guzzi community, namely Paolo Stagi and Massimo Mantovani, finishing seventeenth. They were also able to appreciate the features of the Moto Guzzi V7 III: fun to ride and easy to handle by anyone.

A format for all: classic atmosphere, youthful spirit

The unique format of the Moto Guzzi Fast Endurance Trophy is perfect for everyone to have great fun, from the track novice to the craftiest enthusiast. Each race weekend includes two timed practice sessions on Saturday, both lasting 20 minutes for each rider. The average of the best times achieved by the two riders on the team determines the team’s starting position for the race on Sunday. A clear throwback to the legendary endurance races of times gone by is the race start, which takes place in “Le Mans” style, in other words, with the bikes lined up on one side of the track and the riders who must cross the track from the other side at the start to get in the saddle and set off.

In the race, each rider can ride for no more than 15 minutes + 2 consecutive laps. This means that the race, which lasts 60 minutes - is livened up by at least three rider changes which take place on pit lane. At the end of the race, points are assigned to the top 15 teams.

To stay up to day on all the Moto Guzzi Fast Endurance trophy news, just go to the Trophy web page, fastendurance.motoguzzi.com, and the Federazione Motociclistica Italiana website, www.federmoto.it.