AT ADRIA A PASS TWO MINUTES FROM THE END OF THE “MINIENDURANCE” GIVES TEAM 598 CORSE THE WIN: THIS IS THE FOURTH DIFFERENT WINNER IN FOUR RACES

ALSO ON THE PODIUM ARE NEW ENTRIES BLACK FLAG MOTORSPORT AND BIKER’S ISLAND, NOW LEADING IN THE OVERALL STANDINGS

LOTS OF FUN FOR ALL THE CREWS AND GREAT COMEBACKS: THE MOST THRILLING BY TEAMS PRORASO AND SPIRIT OF 4.5

GRAND FINALE IN MISANO ON 13 OCTOBER 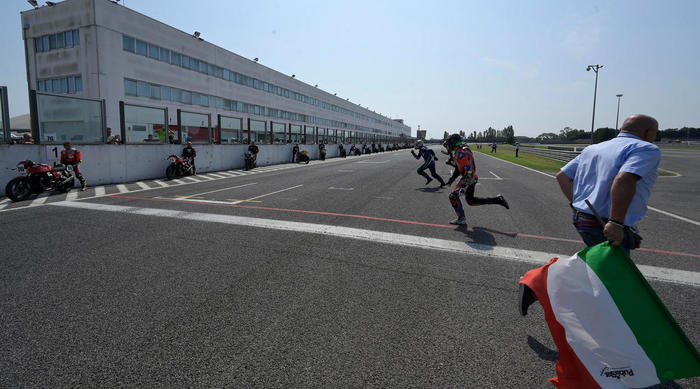 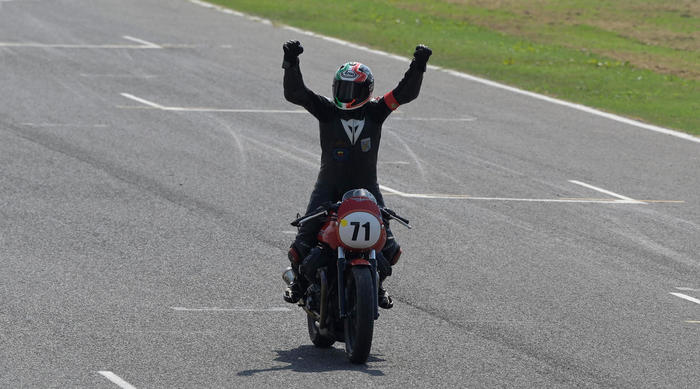 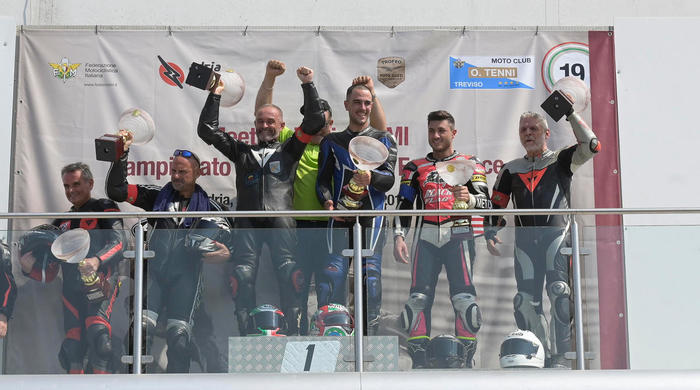 Adria (Rovigo), 1 September 2019 - The 2019 Moto Guzzi Fast Endurance Trophy riders breathed life into another thrilling challenge, racing in full-on “guzzista” style at the Adria International Raceway, the venue for the fourth round of the trophy organised by FMI and Moto Guzzi and dedicated to the Moto Guzzi V7 III bikes equipped with the Racing GCorse Kit and shod with Pirelli Phantom Sportscomp RS tyres.

After three different teams took a turn on the top step of the podium, there was yet another new winner at the Veneto circuit: Team 598 Corse, with Samuele Colonna and Daniele Rossi took their first win of the season, making up ground on the leader - Team Black Flag Motorsport, a rookie team in the Trophy with Stefano Cabuti and Mathia Beatrizzotti - in the final moments of the race, making the decisive pass with just two minutes left in the race. It was a fantastic battle, with all the teams as protagonists astride the agile and fun Moto Guzzi V7 III machines.

The extremely valuable third step of the podium in terms of the overall standings went to Team Biker’s Island (Samuele Sardi - Oreste Zaccarelli) who, thanks to this result, is now all alone in the top spot of the standings with 5 points over Trophy rivals, Team Circuito Internazionale d’Abruzzo: the team made up of Nicola Maccaferro and Riccardo Mancini, after starting from pole position, had to settle for fifth at the finish behind 117 Racing Team. The Misano round will therefore be decisive, as it will determine the winner of the first edition of the Moto Guzzi Fast Endurance Trophy.

Leading the race until the first rider change was Team Canottieri Moto Guzzi, made up of Nicola Marcato and Andrea Biasetton, then hindered by a crash. However, they maintain the satisfaction of having done the fastest race lap with a time of 1’29”716.

The battles in the rear guard were also rather thrilling, with different crews making exciting comeback rides: the most thrilling were those by team Proraso (Francesco Alberini - Roberto Ciovacco) and Spirit of 4.5 (Carlo Bartalini - Dino Romano), both managing to recover no less than seven positions from the first lap of the race to the chequered flag. This earned both teams the special award for best recovery.

Astride the team The Clan V7 III were the riders chosen by way of online voting by the official Moto Guzzi community, brothers Daniele and Davide Deidda, fifteenth across the finish line. It was an unforgettable weekend for them, where they were able to appreciate the qualities of the Moto Guzzi V7 III fitted with the “racing” GCorse kit on the track: fun to ride, agile and easy to use by all.

A format for all: classic atmosphere, young spirit

The brand new format of the Moto Guzzi Fast Endurance Trophy is perfect for everyone to have fun, from track novices to the most seasoned enthusiast. Every race weekend includes two timed practice sessions on Saturday, 20 minutes long each for every rider. The average of the best times achieved by the two riders on the team will determine the starting position of each team on the grid for the Sunday race. A clear throwback to the legendary endurance races of old is represented by the race start, which takes place in “Le Mans” style, in other words, with the bikes lined up on one side of the track and the riders having to cross the asphalt at the start to jump in the saddle and begin the race.

In the race, each rider rides for a maximum of 15 minutes + 2 consecutive laps. this means that the race - which lasts 60 minutes - includes at least three rider changes, done in pit lane. At the end of the race, points are awarded to the top 15 teams.

The fifth and final round of the Moto Guzzi Fast Endurance 2019 Trophy will be held at the Misano circuit on 13 October. Registration for the individual round of the Trophy is possible up to two weeks prior to the race.

To stay up to date on all the Moto Guzzi Fast Endurance 2019 news, simply go to the Trophy website at fastendurance.motoguzzi.com, and the Federazione Motociclistica Italiana website, www.federmoto.it.