The italian rider, already world champion with Aprilia in 2002, will be astride the official RSV4 next season.

Noale, 2 November 2013 – It's official: Marco Melandri will be racing in Aprilia colours for the 2014 World Superbike season. The rider from Ravenna signed a one year contract with an option for renewal that binds him to the team which just finished WSBK 2013 as Manufacturer World Champion with the RSV4. For Marco this is a "return home": in fact, it was astride an Aprilia that Melandri was crowned 250 World Champion in 2002 after taking a third place finish in 2001. 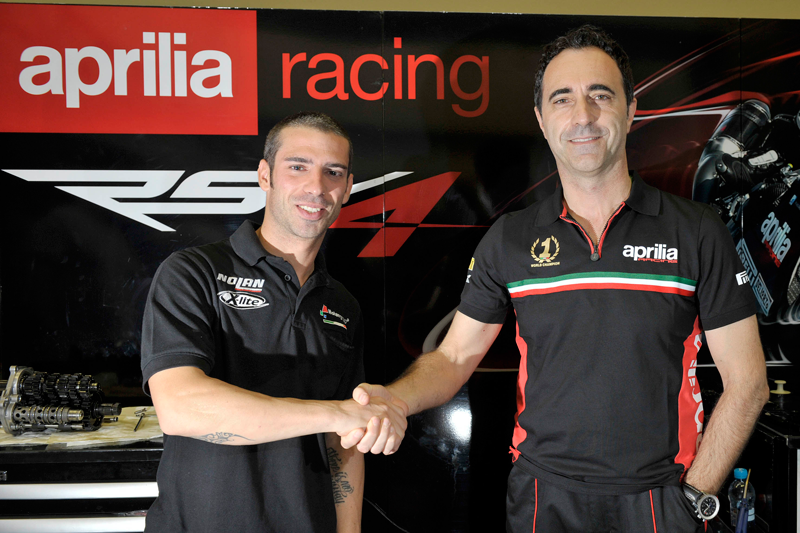 Born in 1982, Marco Melandri began his career at a very young age in minimoto, becoming Italian Champion in 1992 and 1994. Moving to 125 he became Italian Champion for the category in 1997, a title which allowed him to début in the "eighth litre" MotoGP class. Third in 1998 and second in 1999, Marco moved up a category into the powerful 250 2-strokes with Aprilia and this was the beginning of a path that saw him rank fifth in the rider standings in 2000, third in 2001 and World Champion (with 9 wins and 2 podiums out of 16 races) in 2002.

In the top MotoGP category Melandri immediately confirmed his competitiveness, finishing out the year in second place. In the various MotoGP categories Melandri has won 22 races and been on the podium 62 times.

In 2011 Marco Melandri moved over to World Superbike and was immediately a key player, so much that he was battling for the title from his rookie season, although he had to "settle" for second place at the end of the year. Finishing third in the 2012 season, the rider from Ravenna was also a contender for the title in 2013, finishing out the season in fourth place. In SBK he has taken 13 wins and 38 podiums.

The Aprilia title collection in World Superbike, where they have just taken the 2013 Manufacturer Title, includes five World Wreaths (2 Rider, 3 Manufacturer) with 38 wins and the impressive figure of 93 podiums, in addition to 16 pole positions.

Overall, in its brief history Aprilia boasts 52 World Titles (38 in MotoGP, 5 in Superbike and 9 in off-road disciplines) which make it one of the most victorious brands ever in motorcycle competitions.

Marco Melandri: “Coming back to ride the brand that brought me my first World Champion title is - first and foremost - very exciting.  Speaking from a human and personal point of view, there are so many memories that tie me to Aprilia and they are memories of victories.

In all these years Aprilia has demonstrated its worthiness in racing, winning one world title after another, so I am sure that I will find an environment where we are always ready to compete for victory.

From a technical point of I am quite anxious to race on the RSV4, a bike that I have done battle with many times on the track. I think that she and I will... get along well, but the track, the first testing sessions and above all the races to come will give us the answer to that one. And then I think that riding an Italian bike into battle for the world title is amazing for an Italian rider. So follow along with us. It's going to be an exciting and fun season."

Romano Albesiano, Aprilia Racing Manager: “Marco is a rider that we know well. He has already been a part of the Aprilia family, winning a fantastic world championship with our brand. His qualities certainly need no confirmation. He has demonstrated that he is capable of fighting for the title from the first round even in a Championship that is new to him. I'm sure that he'll do well astride our RSV4, a bike that in my opinion is well suited for Marco's riding style. With the signing of Melandri and confirmation of Sylvain Guintoli after his excellent 2013 season, our commitment in World Superbike is confirmed, with the intention of increasing the Aprilia collection of titles. I would also like to thank Eugene Laverty who had a fantastic season astride our RSV4, and I wish him all the best in his future endeavors”.