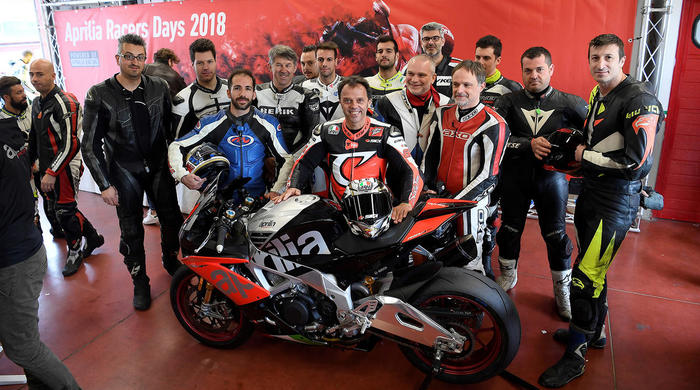 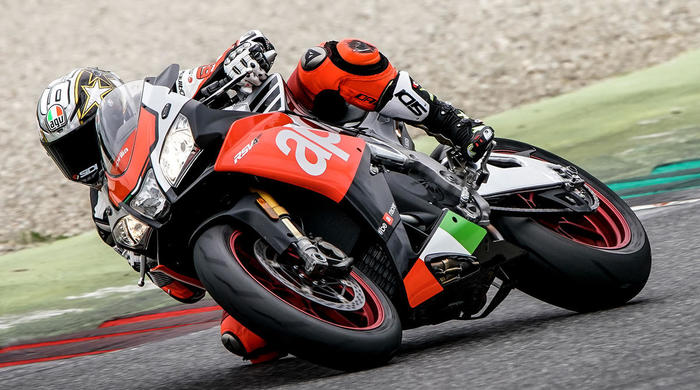 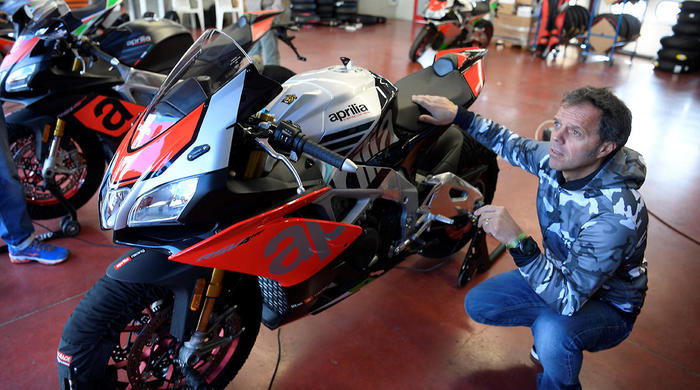 There was a nice surprise for the passionate motorcyclists who met this morning at Mugello to take part in the Aprilia Racers Days.

There among them, ready to jump on an Aprilia RSV4, was Loris Capirossi. The three-time World Champion shared the pits with them and then rode around the spectacular track in Tuscany, squeezing the best performance from his Aprilia V4.

At the end, as always occurs among motorbike riders, there was a moment to exchange their impressions: “Testing the RSV4 RF at Mugello was a fantastic experience,” commented Capirossi. “It's a really nice bike to ride, the feel is immediate, and the engine performs really well. You can feel the excellent connection with the throttle grip. And it’s extremely fast for a standard motorcycle: riding it brings a smile to your face, even to an expert like me. Last year, riding the Aprilia MotoGP at Misano was very exciting, and it was also exciting testing their top-flight road model for the first time today. I had a lot of fun and I will definitely be taking it out again on the track”.

Racers Days are Aprilia events that offer enthusiasts a total experience in the racing world of Aprilia. The calendar includes nine stages, up to September, on world-class circuits, such as Misano, Mugello and Imola, to try out the exclusive Aprilia RSV4 RF and Tuono V4 1100 Factory. For younger riders, the Tuono 125 is also available. And for those who want to improve their performance on the track in safe conditions, there are riding lessons at the “Riding Academy”.

Aprilia RSV4 is the natural evolution of an innovative project, which was able to dominate the SBK World Championship, racking up seven world titles and winning the Superstock FIM Cup on debut. Unanimously acclaimed by critics, the RSV4 has been the undisputed segment representative, the reference point for sportiness and performance, the best example of what can be achieved by exploiting the valuable experience of a victorious Racing Department like Aprilia’s which, in its brief history has taken 54 championship titles. The Aprilia RSV4 is designed around the extraordinary and exclusive narrow-angle V4-cylinder engine, capable of exceeding the threshold of 200 bhp, now developed further and Euro 4-approved, and an ultra-adjustable aluminium frame. It is the heir to a dynasty that has won 18 championships and 143 Grand Prix races in the 250cc GP division, enhanced by the most modern electronic systems applied to the management of the engine and the dynamics of the motorbike, including APRC dynamic control platform, ABS cornering, Pit Limiter and Cruise Control. The RSV4 RF version includes lightweight forged aluminium wheels and an Ōhlins suspension set. Among the numerous accessories available there is also the new version of the V4-MP, the Aprilia multimedia platform that includes the infotainment system and for the first time introduces a true corner-by-corner calibration system using electronic settings.