EWAN MCGREGOR IS THE TESTIMONIAL FOR THE NEW MOTO GUZZI CALIFORNIA 1400.

THE PHOTOS OF THE NEW AD CAMPAIGN "MY BIKE, MY PRIDE" TAKEN IN WEST AUSTRALIA.

Milan, 4 April 2013 – Ewan McGregor is the testimonial for the new Moto Guzzi California 1400. This is the first time that a Hollywood star of this calibre, one of the most beloved on the silver screen, has lent his face to a motorcycle manufacturer for an advertising campaign.

The relationship between Moto Guzzi and the Scottish star is an authentic one and it comes naturally out of McGregor's passion for bikes and in particular for the "eagle brand". A star in more than fifty films including blockbusters such as “Trainspotting”, “Star Wars”, “Moulin Rouge” and “Big Fish”, McGregor had already told of his passion for Moto Guzzi in the road movie “Long Way Down”, when he stopped at Mandello del Lario between John O’Groats and Cape Town, visiting the Moto Guzzi headquarters for the first time. 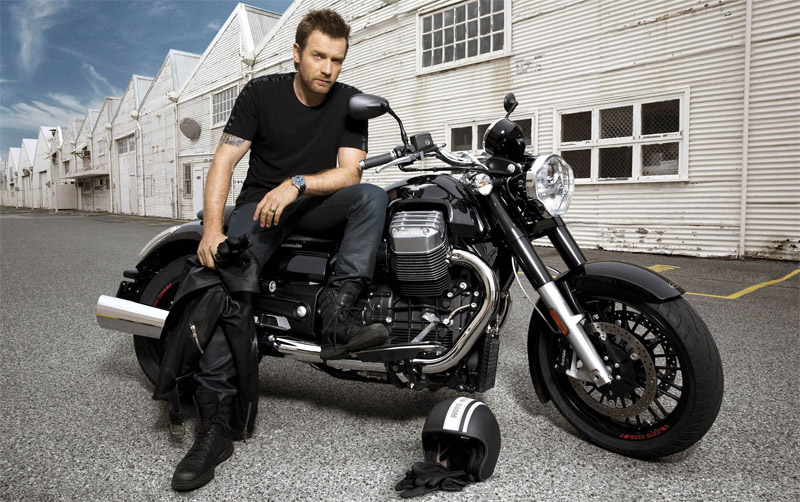 A few months later he turned back up at Mandello del Lario for the 2007 edition of GMG (World Moto Guzzi Days), returning to London astride his white California Vintage.

Today, thanks to the new Moto Guzzi California 1400, the relationship comes together in a unique professional cooperation with Ewan McGregor as testimonial for the new 2013 advertising campaign, a decision which came about after having seen and then test ridden the two Custom and Touring versions of the brand new Italian cruiser.

To make it even more exclusive, the campaign (entitled “My Bike, My Pride”) is set in exotic Western Australia.

For an entire weekend, on March 9th and 10th Ewan McGregor took a break from the filming of his next film, “Son of Gun” directed by Julius Avery, to pose in the cross-hairs of Italian photographer Paolo Zambaldi's lens. The first day Ewan McGregor, the California 1400 Touring and the entire crew reached the fishing village of Lancelin, just 110 km north of the capital, Perth, allowing Zambaldi to enhance the excitement of the trip and reaching the destination in the Scottish actor's magnetic gaze, all in a unique natural setting dominated by tall white sand dunes.

The following day the scenery was the exact opposite, where, in the Fremantle port cupi docks, the long black shape of the California Custom 1400 meets McGregor, spontaneously and naturally playing the role of a hard and pure biker, not to mention being terribly sexy.

The closing shots with this formidable couple are against a nocturnal backdrop lit up by Perth's skyscrapers, where at the end of the last shots with the California Custom, Ewan McGregor describes the experience:

”I'm proud to have starred in this advertising campaign. I think we have really done something unique and great. I liked the new California 1400 straight away, from the first time I saw it. Then it surprised me when I rode it. It is from another planet... truly surprising! And this is coming from someone who knows Moto Guzzi, if you consider that my ten Moto Guzzis include models like the 1971 V7 Ambassador, the 1972 V7 Sport, the 1974 V7 Eldorado, the 2000 V11, the 2001 V11 Tenni, the 2009 California Vintage with a sidecar… and very soon a California 1400 Custom!”       The “My Bike, My Pride” advertising campaign will be launched on 5 April all over Europa and it will be carried in the press and on the websites of all the major lifestyle and specialised periodicals with the highest advertising budget ever allocated by the Piaggio Group for the Moto Guzzi brand. The advertising campaign was handled by The Ad Store Italia agency.

More information, pictures and an interview with Ewan on Moto Guzzi will be available on the official website motoguzzi.com.

Established in 1921 and acquired at the end of 2004 by the Piaggio Group – Europe’s leading two-wheeler manufacturer – Moto Guzzi has operated from the same factory in Mandello del Lario for 92 years, without interruption; with its fully stocked museum on the Moto Guzzi brand, the site is one of the most popular destinations for Guzzi bikers from all over the world.

From the V7 entry model to the very latest arrivals, the California 1400 Touring and Custom, Moto Guzzi offers motorcycles in the 750cc to 1400cc range known for their stylish design, outstanding construction quality and state-of-the-art technical content.

Presented in Europe at the end of 2012 in the Touring version and in early 2013 in the Custom version, the California 1400 is currently being launched on the US market by the subsidiary Piaggio Group Americas.

Fitted with a powerful cutting-edge V-twin 1400cc engine – the largest engine in its class ever produced in Europe – the Moto Guzzi California continues the legend of a great Italian motorcycle, one of the most famous bikes in the world. Imposing, luxurious, with lavish care devoted to the smallest details, equipped with the best latest-generation electronic control technology and the hallmark style of every Moto Guzzi bike, the new California 1400 has been presented to Italian devotees. A powerful Moto Guzzi 1400cc engine in the classic V-twin architecture with cardan shaft drive, ride-by-wire, cruise control, ABS and traction control: everything on the California 1400 Touring and Custom combines the best of cutting-edge technology with the legendary Moto Guzzi brand.

Thanks to the success of its product ranges, the result of strategic investment in R&D and in the renovation of the historic factory built in 1921, in 2012, in sharp contrast to the trend on the European motorcycle market, Moto Guzzi reported 15.3% growth in bike sales (6,664 vehicles compared with 5,763 in 2011, when the company already reported 30% year-on-year growth).