75 OF THE RAREST VESPA MODELS ON DISPLAY UNTIL 15 AUGUST

Pontedera, 7 July 2021 - The Autoworld Museum in Brussels, home to one of the world's largest and most prestigious collections on motoring history, is celebrating Vespa's 75th anniversary: until 15 August, visitors to the city’s sumptuous Palais Mondial will have the opportunity to admire 75 models of the world's best-known and best-loved two-wheeler. 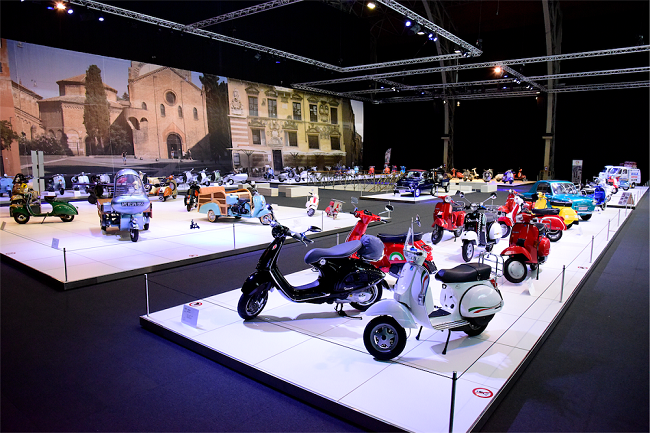 In a country with more than 5,000 Vespa riders registered with around sixty official Vespa Clubs, the exhibition has been created to pay homage to the most deeply held values of the Vespa, a scooter that has far exceeded its function as a smart and simple means of transport to become a global brand, a symbol of Italian technology and style followed by millions of devotees.

For this reason, in addition to the Vespa two-wheelers produced in Pontedera, the exhibition presents the rare models manufactured in certain periods in other European countries: at the MISA factory in Jette, Belgium, and in France, Germany, Britain and Spain. The exhibits also include Vespa scooters with sidecars and a number of Ape three-wheelers, as well as the very latest Vespa 946, Vespa Elettrica and the special-edition Vespa 75th, the model brought out to celebrate this important milestone.

Vespa was born out of the desire to create an innovative product for individual mobility. First a “motor scooter” was built on the model of small motorcycles for parachutists and then a prototype that revolutionised the concept that had dominated the classic motorcycling layout until then. A vehicle was created with a stress-bearing body, direct-drive, with the gear shift on the handlebar. The classic front fork disappeared in favour of a single-sided swingarm that made tyre changes easier and, above all, the frame disappeared, replaced by a stress-bearing body capable of protecting the rider from dirt and rumpled clothing. The Vespa design patent filing date is 23 April 1946.

From its first appearance - in a country where everything needed to be rebuilt but, partly for this reason, full of ideas, creativity and hope - Vespa represented the joy of living and racing toward the future and this is why it soon became an icon of freedom and emancipation for guys and girls all over the world. This wealth of Vespa’s values was accompanied throughout the years by a style and technology always on the cutting-edge in the various decades of its life.

After the years of rebirth, Vespa continued to strengthen its legendary status, fortifying its identity through the decades of economic prosperity and the generational renewal of the sixties. As cars and mass motorisation spread, Vespa offered salvation from traffic, with the versions in the smaller engine sizes catering to the legendary world of youth which, precisely in those years, was gaining its space in society. And when, in the ‘70s, the signs of a growing ecological awareness arrived, Vespa was the antidote to city pollution, able to zip through traffic and easily find parking.

In the various eras it has seen, Vespa has always represented the cutting-edge of technology. Characterised by an extremely advanced stress-bearing body concept, still built entirely out of steel to this day, it marked the evolution of individual mobility. Today, the latest Vespa vehicles, equipped with ecological engines and technical solutions to support modern riding, represent the style synthesis of an evolution that has made Vespa design immortal, ensuring it is an icon of Italian elegance the world over.