Roberto Colaninno: "Aprilia Racing is the most advanced technological experimentation and development platform for the entire Piaggio Group and all of our products and brands benefit from it"

Romano Albesiano: "The new bike reflects recent Aprilia Racing tradition, reinterpreting every concept without compromise, and it is the most ambitious project our racing department has ever undertaken"

Doha (Qatar), 2 March 2016 – The new 2016 Aprilia RS-GP débuts at Losail. From 2 to 4 March the Italian V4 will be on the track for the first time in an official event, the final IRTA tests before the start of the 2016 Grand Prix Motorcycle Racing season.

This will kick off the 2016 MotoGP season for Aprilia Racing. For the Italian team this is a fundamental step in the project that began in 2015, since the new Aprilia RS-GP is not an evolution of the previous model but an entirely redesigned prototype based on the knowledge gained during the season last year, characterised by experimentation and data acquisition. The new bike is already a milestone in the young and victorious Aprilia racing history: in fact, it is the first true MotoGP bike, entirely designed, developed and built by Aprilia in its every component, beginning with the engine, a unit characterised by its exclusive narrow V4 architecture, the same one that distinguishes the entire supersport line from Noale.

Roberto Colaninno, CEO and Managing Director of the Piaggio Group, had this to say about the new challenge: "From a Group strategy point of view, Aprilia Racing is not just the Aprilia racing team: it is the most advanced technological experimentation and development platform for the entire Piaggio Group from which all of our products and brands benefit. For this reason, from this 2016 season the Piaggio Group logo stands out prominently on the bikes' livery. In fact, the technology developed for racing operations is not intended only for racing, but it also serves the purpose of testing innovative solutions that will then be applied to road-legal products, from supersport bikes all the way to scooters, with the end goal of improving our products in terms of performance, safety and the ability to provide our customers with riding pleasure and fun".

"On the competition level, how can I not remind you of the important results we've achieved so far?" continued Roberto Colaninno.  "With our own motorcycle brands, the Group has won 32 out of the 104 world championships ever won in its history in just twelve years. An amazing 28 of these titles were won in one decade by Aprilia, even with riders of the calibre of Max Biaggi and Jorge Lorenzo. The others went to the Gilera brands – with the never-forgotten Marco Simoncelli – and to Derbi, which, among other things, christened an extraordinary champion like Marc Marquez. I would like to wish Albesiano and his team, the riders Bautista and Bradl, and the entire Aprilia Racing staff all the best and a season that will give them and all of the Piaggio Group reasons to be satisfied."

With 104 World Championships in its collection (54 Aprilia, 15 Moto Guzzi, 21 Derbi, 14 Gilera) the Piaggio Group is the most victorious motorcycle group of all times.

Aprilia, born into racing, is the true sports standard-bearer for the Piaggio Group.

With 294 Grand Prix races won in World Championship GP Motorcycle Racing, Aprilia holds the record for the most wins of any European manufacturer in the history of top motorcycle competition. These race wins are joined by 54 world titles: 38 in the World Motorcycle Championship (20 in the 125 class and 18 in the 250 class), 7 in Superbike (double Rider/Manufacturer title in 2010, 2012 and 2014, Manufacturer in 2013) and 9 in the Off Road disciplines (7 in Supermoto and 2 in Trial). The Aprilia trophy case also includes last year's victory in the Superstock 1000 FIM Cup with the RSV4 RF ridden on the track by Savadori.

Alvaro Bautista and Stefan Bradl made a fundamental contribution to the development of the new project as they conducted the 2015 "laboratory-season" on the track. Alvaro and Stefan had the chance to familiarise themselves with the 2016 RS-GP during the previous private tests on the Losail circuit, immediately recognising its great potential. The brand new technical package, which is joined by the new tyre supplier and the controlled electronics package, requires an obvious fine-tuning phase before we can arrive at a good level, but the feelings we got during the first two tests make us solidly optimistic about the new season.

“The upcoming season will be a very important one for us", said Aprilia Racing Manager, Romano Albesiano. "The new bike reflects recent Aprilia Racing tradition, reinterpreting every concept without compromise, and it is the most ambitious project our racing department has ever undertaken. The first responses from testing have been positive. We received very positive feedback from both riders specifically from a dynamics point of view. In any case, this is the beginning of a long path and we are well aware of the inevitable difficulties that come along with any new project."

Albesiano had this to say about the riders, Bautista and Bradl, both confirmed for the 2016 season: "We can count on the contribution of an expert team and two highly motivated riders like Alvaro and Stefan, who immediately realised the importance of our development plan and the great efforts put forth by the racing department. I believe that, after the initial fine-tuning phase, we'll be able to set our sights on respectable results."

For Bautista (riding the number 19 bike) this is his second full year astride the prototypes from Noale. "This season will be a new challenge, my second year with Aprilia", said Alvaro. We'll be able to rely on our experience from 2015. We aren't starting from zero, but in any case we'll have to develop a completely new bike. I think that Aprilia has very clear ideas about what they can expect this season. In any case, it will be a big challenge because we'll have to work hard on race weekends since we have done very little testing. We'll need to be good at streamlining things. To be honest, it would be nice to be competitive around the mid-season mark. It's difficult to predict now because there are so many things that need to be sorted, but I'm confident because during the winter break Aprilia did a great job with the data gathered in 2015. I'm pumped up and I want to have a good season, getting back into the battle for top positions, but I am under no illusions. With patience, hard work and sacrifice we can do it."

Stefan Bradl, riding the number 6 bike, echoed the sentiment: "The first contact with the new bike was definitely positive, despite the fact that it's still too early to take a position. The Aprilia Racing techs did a great job in the right direction. Now our job will be to explore the potential of the RS-GP lap after lap. We really have a lot on our plate, but we also have a wide margin for improvement. Along with the new bike, we also have the new electronics and tyres, aspects that we had already begun working on but that still require a lot of development. We won't be bored, that much is certain. For the first time in my career I'm working on an official team with the job of developing a new project. I think that this is the greatest condition possible for a rider who wants to set his sights on staying out front."

2016 will be Gresini Racing's twentieth Grand Prix Motorcycle Racing season: a history that includes two world titles (with Daijiro Kato in 250 in 2001 and Toni Elias in Moto2 in 2010), 42 wins in GP and MotoGP runner-up World Champion titles in three consecutive seasons, from 2003 to 2005. “In recent months, Aprilia Racing staff at Noale and everyone on the Gresini Racing team have put forth an incredible effort on the technical and organisational front", said Team Manager, Fausto Gresini. "We never stopped. We have a great desire to demonstrate our full potential and we are highly motivated as we approach the first Grand Prix. The Aprilia Racing technicians have taken advantage of the experience gained last year and all their precious know-how to create a prototype ready to battle in a MotoGP season that promises to be even more heated and exciting." 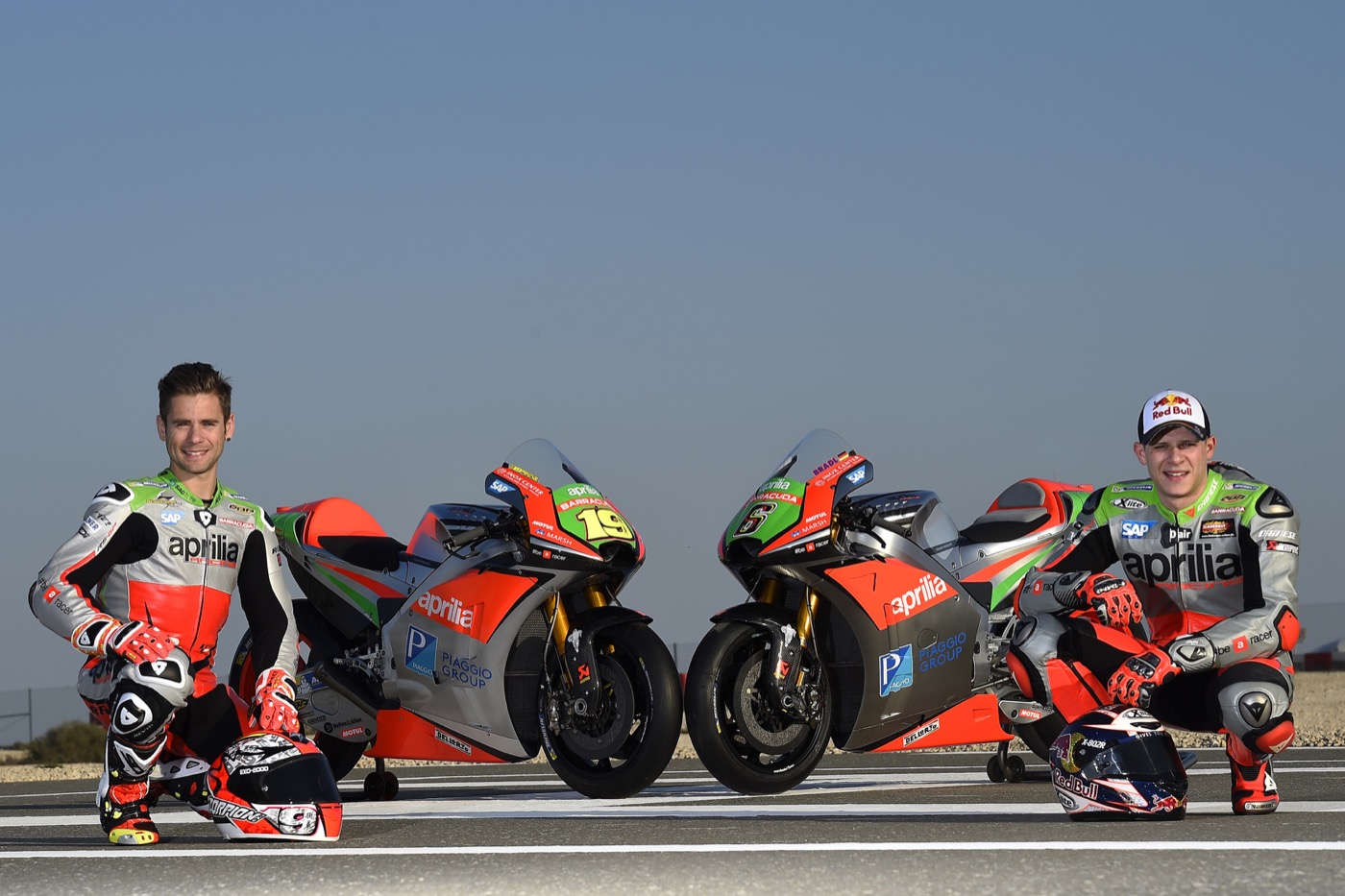 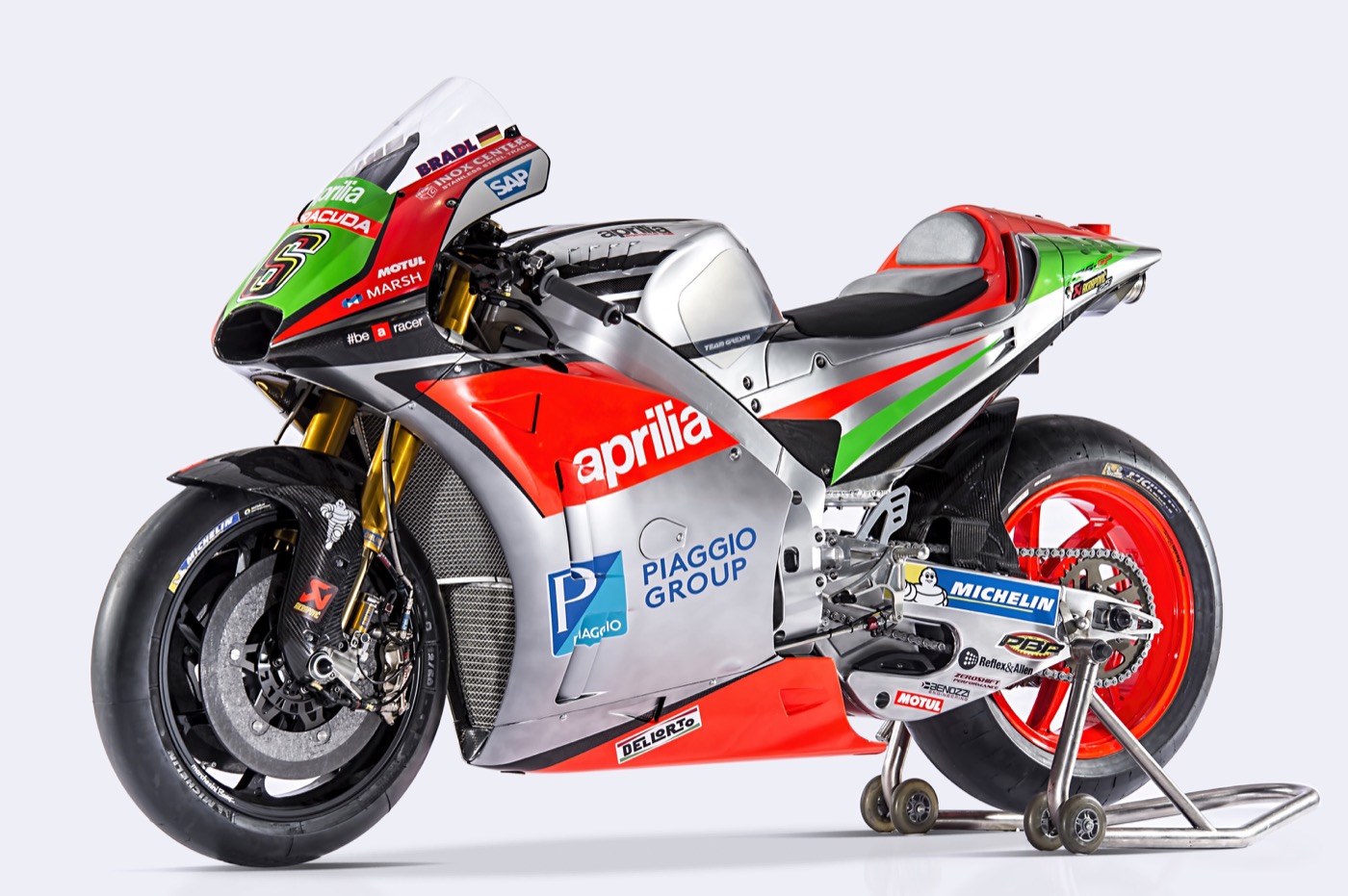 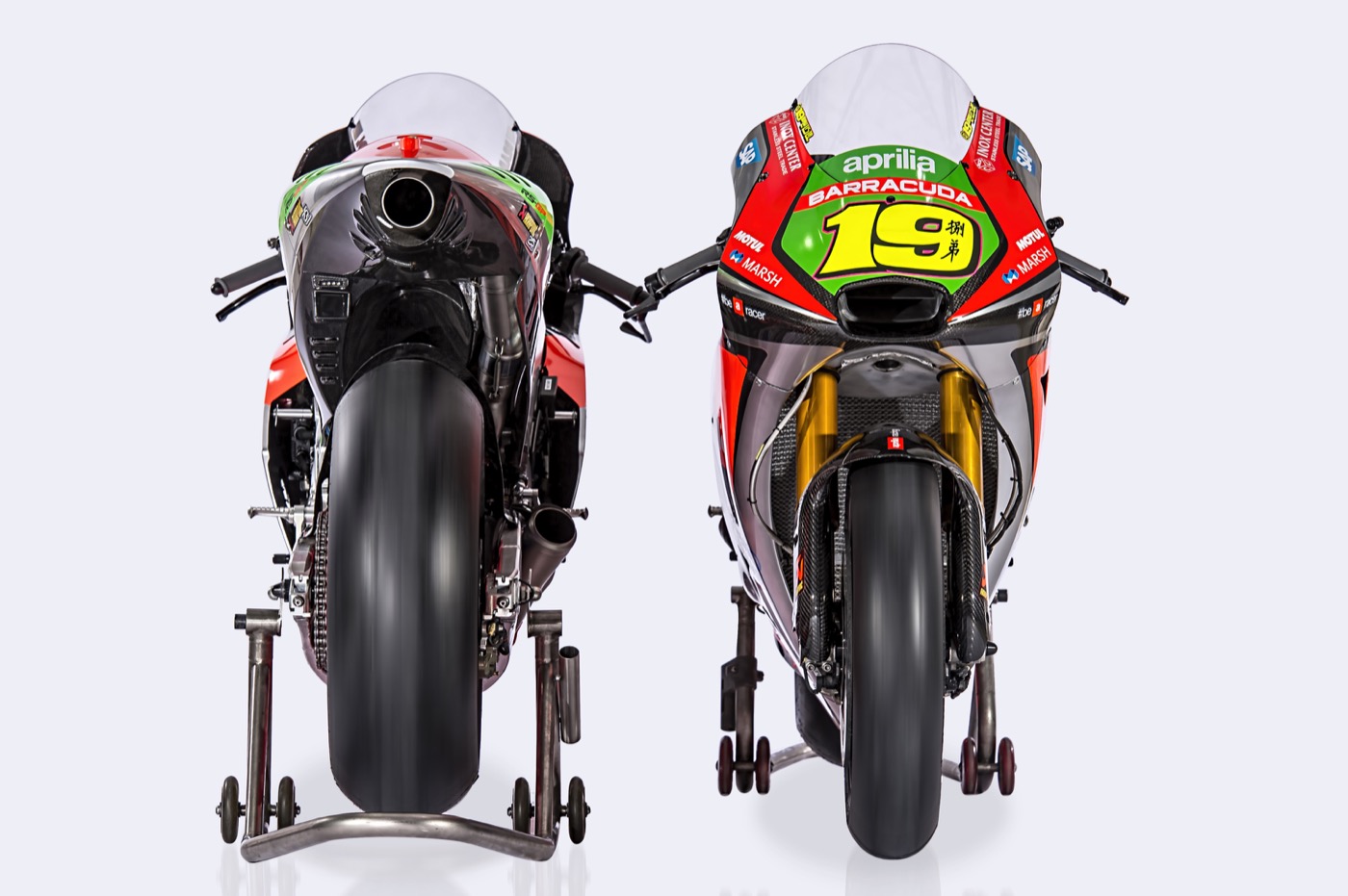