LEON: “EXTRAORDINARY BIKES, HARD TO CONVINCE ME NOT TO TAKE THEM OUT FOR A RIDE”

JORDI: “I'M ASTONISHED AT THE LEVEL OF THE V4-MP MULTIMEDIA PLATFORM”

LEON HASLAM AND JORDI TORRES ARE READY TO TAKE ON THE DEMANDING ASSEN CIRCUIT: "IT'S A TRACK I LIKE", SAYS THE BRITISH RIDER. "A COMPLETELY DIFFERENT TRACK THAN ARAGON, BUT SUITED TO MY RIDING STYLE" SAID THE SPANIARD. 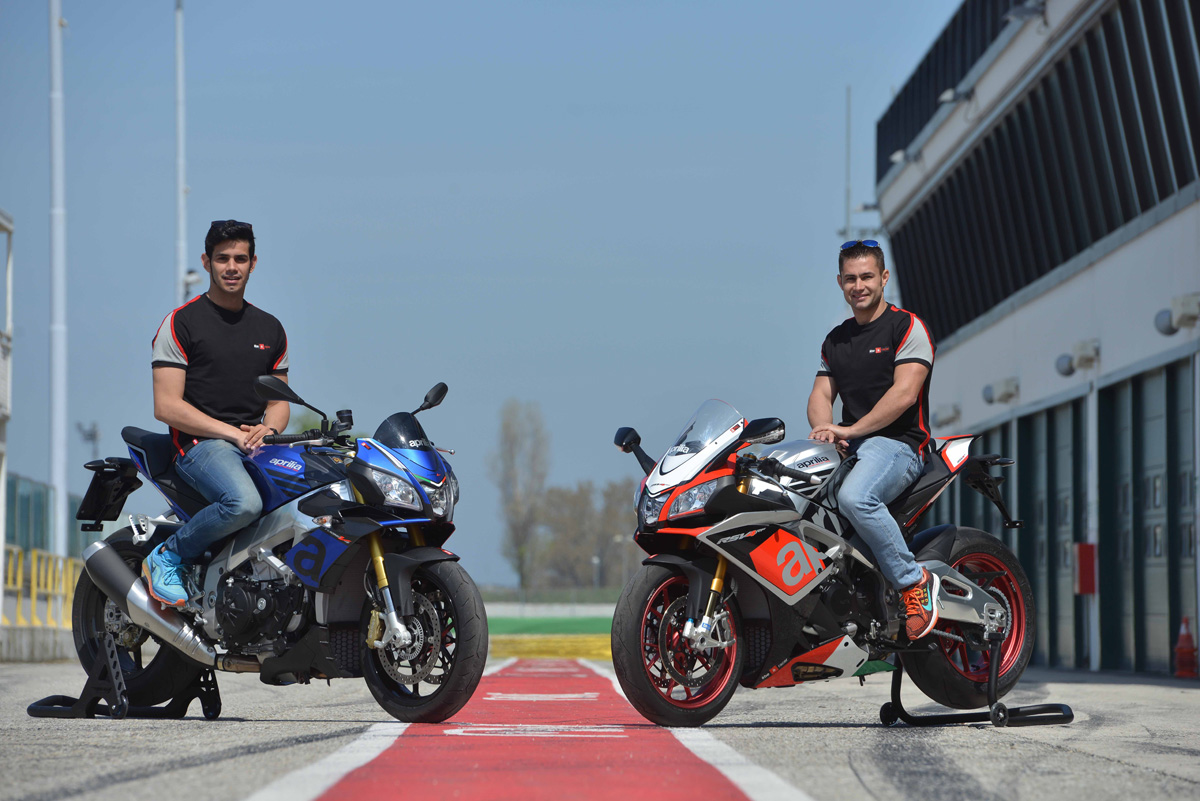 Misano Adriatico, 15 April 2015 - Special guest testimonials are at Misano Adriatico for the V4 Days where Aprilia is introducing the brand new RSV4 RF and RR and the Tuono 1100 Factory e RR to the international press and customers.

Leon Haslam and Jordi Torres, Aprilia standard bearers in the World Superbike championship, made a stop at the Misano World Circuit to christen the brand new V4 street bikes from Noale. On their way back from Aragon and just twenty-four hours from departing for Assen, the British rider and his Spanish colleague found themselves in the spotlight for a technical briefing before the participating journalists got onto the track and then commented on the progress in WSBK after the first three rounds.

“Assen is a track that I like and I think it will suit the characteristics of the RSV4 RF well" stated Leon Haslam. "The experience gained at Aragon will also be fundamental Session after session we are learning how the new bike reacts to our changes and figuring out how to adapt the settings to various conditions. I couldn't pass up the chance to come to Misano to introduce the new street version of my RSV4 and I really had to struggle to resist getting on and taking it for a ride! The level that these bikes have reached is extraordinary. A customer with the Aprilia RSV4 can take advantage of a chassis, electronic controls and top shelf performance which are very close to an authentic Superbike.”

Jordi Torres was also positive and determined: “We did a great job at Aragon. The track is long and hard and I learned a lot. Now we are off to Assen, a completely different circuit but one that suits my riding style well. I need to continue learning the secrets of this bike and this category. We are very close to the faster riders in the championship but I need to manage to keep up with them all the way to the end of the race. Today I had fun being a “teacher” for the journalists, explaining the characteristics of the Misano track and seeing the street version of the RSV4 RF in action I was surprised at the unmistakeable sound of the V4. I'm also amazed by the hypernaked of this bike, the Tuono 1100: now the problem is that I want a Tuono for myself to ride on the street!”

The two World Superbike riders also had positive things to say about the fantastic new technology that Aprilia has launched, the Aprilia V4-MP multimedia platform which transforms the customer's smartphone into an exceptionally capable informative instrument. "Because of my age I was basically born with the smartphone - said Jordi - but Aprilia has developed something truly different than any other app in the motorcycle world. This application is really close to the professional instruments that we riders use." For Leon the V4-MP was also a pleasant surprise: "You open it and you are immediately localised in the Misano garages, but that is normal in this day and age" said the British rider. "What makes the difference is that the smartphone dialogues with the bike's control unit and the possibility of setting, turn by turn - on any circuit - the traction control and anti-wheeling sensitivity, to then analyse your performance at the end of the session and try to improve to find the best lap."

The new Aprilia RSV4 introduced over the last few days at Misano Adriatico - a track where the RSV4 has taken 4 wins and 4 podiums in the last five seasons - represents the most important and profound evolution ever achieved on this extraordinary model that has one 7 world titles in just 5 years of participation in WSBK, adding 54 championship wreaths to the Aprilia trophy case. The main goals of the new V4 project are clear: increase power across the board, exceeding the threshold of 200 HP maximum peak and at the same time increase the already generous torque at all engine speeds.

The new Aprilia is also the only Superbike that allows the rider to adjust the engine position in the frame, the headstock angle, the swingarm pivot and the rear end height, naturally in addition to the fully adjustable suspension.

APRC (Aprilia Performance Ride Control) is the well-known control systems package derived directly from the winning technology in the World Superbike championship, the most complete of its kind available on the market today. It also has the advanced and safe Race ABS system that can be set to 3 different settings. To distinguish the RF from the RR model there are parts such as the Öhlins suspension, forged aluminium wheels and a dedicated livery. And to complete the racing approach of this extraordinary bike, the rider has the option of connecting his or her smartphone to the vehicle through the Aprilia V4-MP platform.

The new Tuono V4 1100 is an exclusive excitement and fun generator in its purest state. New 175 HP engine, taken from 1,000 to 1,100 cc, with a powerful maximum torque of 121 Nm, revamped chassis setup to achieve better agility, fine tuned APRC, new look, the possibility of connecting your smartphone to the vehicle through the V4-MP platform and two distinctly outfitted versions (Factory and RR) that have the same, strictly Aprilia character in common. 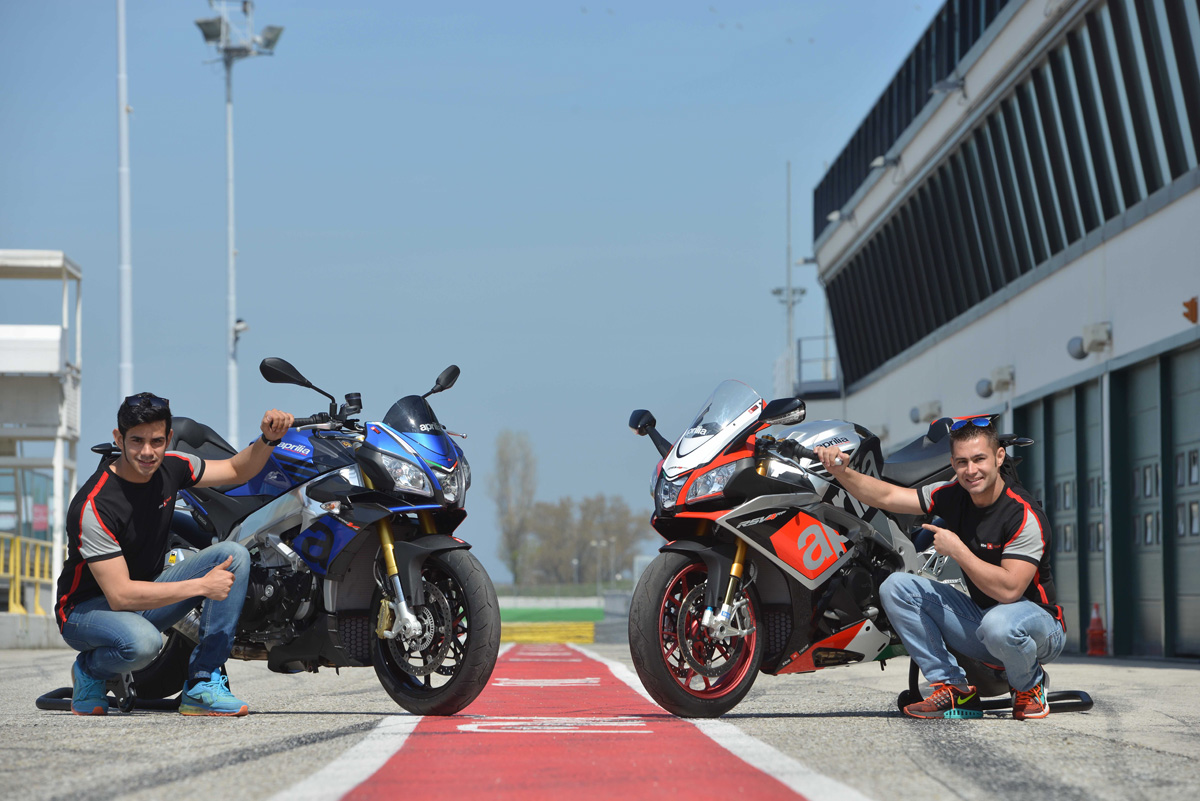