The true 125 sport bike derived from racing is now available in the Replica version too. The excellent performance of the RS4 125 is joined by numerous refined particulars that make it unique

17 July 2012 - After the success obtained over a twenty year period on both a commercial and sports level with RS 125 with a 2-stroke engine, (from 1993 to the present in more than 100,000 units and sold in more than 30 countries around the world), in 2011 Aprilia introduced its first eighth of a litre 4-stroke, directly derived from the RSV4, winner of the 2010 World Superbike championship and currently at the top of the championship standings with racing ace, Max Biaggi. RS4 125 quickly became the most beloved and sought after sport bike among young people, who were immediately won over by its performance, safety and riding characteristics of a pure racer, placed at the service of daily mobility.

One year after the launch of the brand new RS4 125, Aprilia offers an even more precious and refined version, the RS4 125 Replica. The name brings to mind Aprilia's racing success: 49 world titles and hundreds of championship races won, numbers which, in its brief history, have made Aprilia the most victorious Italian and European brand in World Grand Prix with 294 GP races won, leading to maximum confirmation of champions of the calibre of Biaggi, Rossi, Capirossi, Melandri, Stoner, Lorenzo.

The objective pursued by Aprilia in packaging the RS4 125 Replica is to transform the best into the most, thereby satisfying the numerous requests for a version even closer to the RSV4 SBK ridden to victory by Max Biaggi. On the base of the already stylish and competitive RS4, Aprilia Research and Development personnel worked on a dual profile to make the RS4 125 similar in graphics to the bike that is so successful in the world SBK championship, and at the same time honing the already excellent riding characteristics.

The extremely sporty fairing takes on a black and red livery, with the front side fairing profiles made precious by the colours of the Italian flag in order to emphasise the brand's origins with pride. The passenger portion of the saddle can be replaced with the removable single seat shell, colour coded to the body, a touch of sportiness inspired by the Grand Prix single seater. The number “3” that adorns the tail fairing and the top fairing is a clear homage to the enterprises of Max Biaggi and his countless victories in the factory derivative world championship.

On a technical level the upgrade is noteworthy: the already excellent braking system on the RS4 is further improved by adopting a pair of steel, wave style discs. The front is 300 mm and in unison with the four piston radial caliper, while the rear is 220 mm. In order to enhance the exceptional riding characteristics of the RS4 125 Replica, tyres with a clearly sporty purpose were selected: the choice fell to the new Pirelli Diablo Rosso II, tyres which are usually reserved exclusively by higher category bikes. The tyres are shod over 17”, six spoke wheel rims and are unchanged in the already generous sizes (110/70 on the front and 150/60 at the back).

RS4 125 Replica is the first in its category to have as standard equipment the innovative Aprilia Quick Shift transmission, a sophisticated technical solution taken directly from its big sister, RSV4 APRC which allows the rider to engage the next gear while keeping the gas open and without using the clutch, thereby making up-shifting easier and quicker.

Aprilia RS4 125 Replica evolves the concept of a sport bike for the young to maximum levels of technological refinement, recalling – both in its livery and in the importance of its lines – the look of the super sport Aprilia RSV4 in its Superbike version. Careful aerodynamic studies allowed the surfaces to be reduced to a minimum without penalising protection, leaving the frame and engine visible, which come out as fundamental elements of the design. The triple front headlight has by now become a trademark element of all Aprilia sport products, while the compact tail is a true work of design art and it integrates the LED taillight perfectly, which is able to provide excellent visibility even at night. One detail which has made this model famous remains unchanged on the RS4 125: the exhaust, completely built into the lower part of the fairing, clearly inspired by the racing bike.

The chassis is at the top of its class for technology and the materials used: built based on the exceptional experience gained in competition, the frame uses two lateral beams die-cast in aluminium alloy with crossed reinforcing ribbing. An extremely lightweight structure, capable of providing high torsional rigidity. The front suspension is made up of a fork with 41 mm upside down stanchions and black anodised sleeves, while the monoshock is fixed directly to the asymmetrical swingarm.

Aprilia RS4 125 Replica is powered by the new single cylinder 125 cc, 4-stroke, 4 valve engine, equipped with electronic fuel injection and liquid cooled. The sophisticated dual overhead cam (DOHC) system ensures the maximum power possible for this engine capacity, together with a fluid and linear output of power in maximum respect for the environment, complying with the strictest pollution standards. 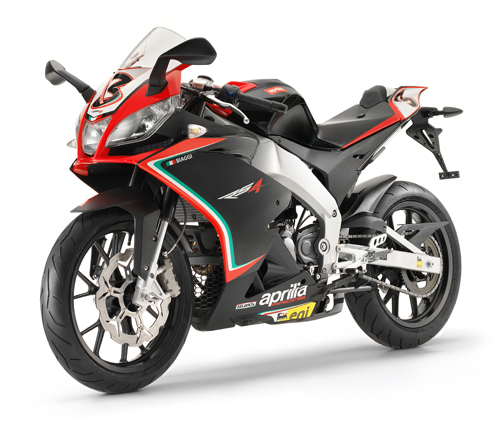