ROBERTO COLANINNO: "Staff, technology and a lot of passion. We have everything we need to continue growing. Aprilia's history of success demands that we be protagonists."

ROMANO ALBESIANO: "We grew a lot in the pre-season tests; we intend to do the same throughout the Championship."

Noale (Venice), 3 March 2017 – Last year the RS-GP made its début in the Doha tests, the first MotoGP bike developed entirely by Aprilia Racing to compete in the premier class of Grand Prix Motorcycle Racing. Just twelve months later, the all-Italian project must now face an important final exam: the constant progress demonstrated in the first season, with 16 Top-10 finishes, was reconfirmed during the tests in Valencia, Jerez, Sepang and Phillip Island.

Aleix Espargarò, a welcome returnee to the Aprilia camp, immediately found the right feeling with his RS-GP, especially in terms of braking stability. The Spanish rider was also able to test the 2017 evolution of the Italian MotoGP bike, approving of the progress made compared with the 2016 version and demonstrating encouraging competitiveness during the official tests.

Sam Lowes, on the other hand, could not help but have a different task than his teammate's. The talented English rider must first of all become familiar with a prototype that is very different from the Moto2 bike he has ridden in the past, both strictly in terms of performance and in terms of the riding style it requires. The progress demonstrated during the tests led to reducing the gap behind the best in the category and, much more importantly, improving his sensations in the saddle. 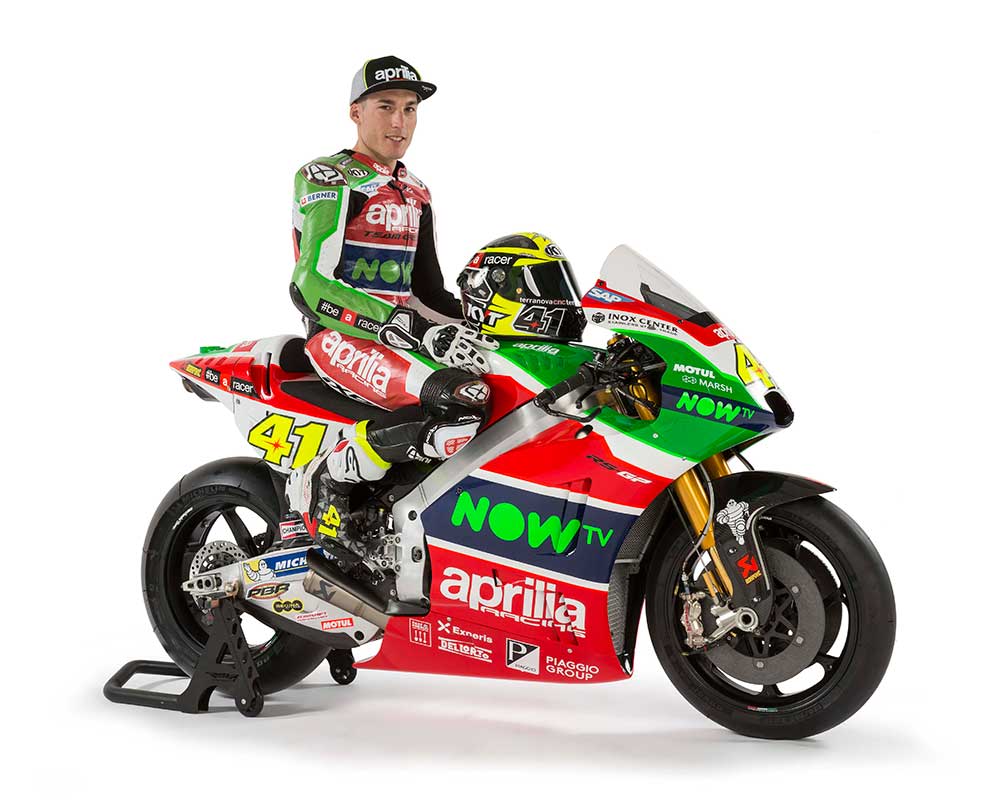 “Aprilia Racing represents one of the Piaggio Group's points of technological excellence. In fact, racing is the highest point of experimentation and the development of technological solutions from which all the products and brands in the group then benefit. Last year, we introduced our RS-GP, the first MotoGP bike designed and built entirely here in Noale. In the second half of the season, the new bike showed clear progress, consistently finishing in the Top-Ten. This year, we want to continue our growth trend and be a threat to manufacturers who have been in this class for decades and we have everything it takes to achieve this goal: staff, technology, experience and a lot of passion.

Aprilia's sport history boasts 54 World Titles, most of which, no less than 28, have been earned since Aprilia has been part of the Piaggio Group. A history with such great success demands that we work hard to always be protagonists with the goal of continuing to entertain and attract the young people who have always been Aprilia's greatest asset.”

The 2017 Aprilia RS-GP comes to the beginning of this season dressed in a new red, white and green livery to celebrate a fiercely proud all-Italian project. The fairing was designed by Aldo Drudi, certainly the most famous designer in the racing world, just one more Italian value that Aprilia will hold high in 2017 on tracks all over the world.

Important partnerships have been renewed this year that go beyond a simple sponsorship relationship, like SAP with whom the Piaggio Group is developing important future projects for connectivity between vehicle and rider and NOW TV, Sky's Internet TV, with a wealth of content such as Cinema, TV Series and Sports, with whom Aprilia Racing will be pioneering innovative content and entertainment formulas.

"For us, 2017 begins with a different situation compared with last year. We already know that we have a bike, the RS-GP, which has reached a good competitive level. The evolutions that we studied and applied in view of the new season concern every aspect of the bike, from its weight, which has been optimised, to overall balance, not to mention engine performance and the electronics package. An all-around operation but without any drastic changes, given the good starting base, with which we want to take another step toward the goals set for the Aprilia MotoGP project. The initial feedback has been encouraging. Aleix likes the new bike and has some rather clear ideas on which characteristics have the most room for improvement, so we will be working in those areas throughout the season. The racing department put in a lot of effort during the winter break. Everyone understands the importance of the challenge we are facing and our front fairing is just the most visible example of Aprilia's dedication to innovation. During the tests we stayed in a group of very competitive bikes and riders, where just a few tenths of a second can make a big difference. Our goal, after showing that we can consistently battle for the Top-10, is to improve further."

"I am happy to unveil the new livery that we will use this year. It is always nice to officially launch a new project, especially because I have great confidence in Aprilia Racing and the team's work. It will definitely be a good season. We still have a lot to improve, but we have undoubtedly gotten off on the right foot. We are keen to grow. We have specific goals and in order to achieve them, both the team and I will put all of our energy onto the track. All that's left now is to take on the first race in Qatar and see where we stand against our rivals."

"First of all, I am happy to be part of this big family with such a strong bond to racing, with a prestigious history of success like Aprilia Racing. I can't wait to get back on the track in Qatar. I think that I was able to express about 85% of our potential in the winter tests and from the first race I would like to identify a good base to build on, improving step by step all the way to Valencia. We are setting our sights on the points zone straight away and then aiming for the Top-Ten and to battle for some important MotoGP placements. I believe in myself and I fully believe in the potential of my bike and my team."

"We are approaching the 2017 season well aware that we can count on a good starting base: in the tests at Sepang and Phillip Island, the team and riders worked very well. On one side, a determined Aleix got straight to work astride the new RS-GP, finding excellent sensations and providing important indications to steer technical development, which is obviously nonstop and concerns all areas of the bike. On the other side, Lowes has made significant progress, getting much closer to his teammate in terms of times. Sam is tackling this new adventure with the right spirit, aiming at building up the necessary experience. The new RS-GP is very nice and none of us can wait to see it in action in the new colours: we are ready for a new and exciting challenge together with Aprilia Racing.” 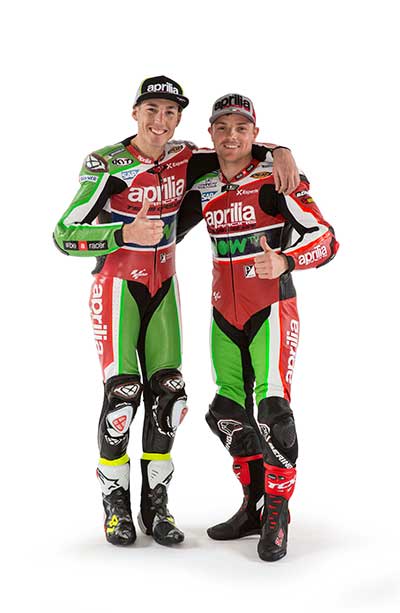 With 294 Grand Prix races won in World Championship GP Motorcycle Racing, Aprilia holds the record for the most wins of any European manufacturer in the history of top motorcycle competition. These race wins are joined by 54 world titles: 38 in the World Motorcycle Championship (20 in the 125 class and 18 in the 250 class), 7 in Superbike (double Rider/Manufacturer title in 2010, 2012 and 2014, Manufacturer in 2013) and 9 in the Off Road disciplines (7 in Supermoto and 2 in Trial). The Aprilia trophy case also includes the 2005 Superstock 1000 FIM Cup, won with the RSV4 RF ridden by Lorenzo Savadori, currently riding an Aprilia in World Superbike alongside Eugene Laverty.