Aprilia dominates World SBK race 1 is a one-two-three with Guintoli, Laverty and Fabrizio

LAVERTY TRIUMPHS IN RACE 2 WITH GUINTOLI SECOND AND FOUR APRILIAS FINISHING IN THE TOP SIX.

THE TWO APRILIA STANDARD BEARERS NOW LEAD THE WORLD CHAMPIONSHIP IN A TIE.

TOP POINTS FOR APRILIA IN THE MANUFACTURER CHAMPIONSHIP.

Phillip Island - Australia, 24 February 2013 - The first and long awaited round of the 2013 World SBK season was dominated by Aprilia, winning both races and placing a seal of superiority worthy of the reigning World Champion Team on the weekend. 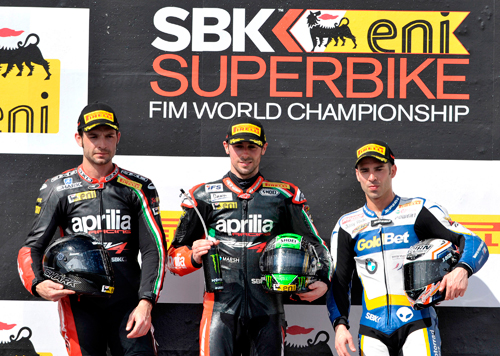 Eugene Laverty and Sylvain Guintoli swapped the top two steps of the podium and are now tied at 45 points to lead the world championship. Aprilia is at top points in the world Manufacturer championship with 50 points. The 4 cylinder bikes from Noale made a true show of superiority at Phillip Island: a one-two-three finish in Race 1 and a one-two for the official riders in Race 2, with four RSV4s finishing in the top six.

The victory in Race 1, which came at the end of an exciting comeback, was a reward for Sylvain Guintoli in his début race on the Italian bike. Team mate Eugene Laverty crossed  the line right behind the Frenchman after leading for most of the race and being kept busy in the last few laps fending off attacks from Roman rider Michel Fabrizio, also astride an Aprilia RSV4 for Team Red Devils Roma.

In Race 2 Guintoli and Laverty got away during the first laps, tailed by Marco Melandri and the two private Aprilia RSV4s ridden by Fabrizio and Davide Giugliano (Team Althea Racing) to take the top two steps of the podium in reverse position. This is Eugene Laverty's second win with Aprilia and it is a result that comes, above all, from the intense work done over the past few days which was aimed at optimising tyre performance down to the last taps. The track record set by the Northern Irishman 2 laps from the end is a demonstration of just how effective that work was.

“We got off on the right foot – were Eugene Laverty's first words – all the work from the past few days has paid off. My Aprilia was fast and it performed as I wanted it to from the first to the last lap. In Race 1 I may have been a bit too conservative with the tyres, still taking a nice second place, but in Race 2 I pushed a bit more decisively. At the end, when it was Sylvain, Melandri and me, I tried and was able to get away, shaving a few more tenths off my pace. The track record two laps from the finish was nice confirmation that we turned up to the races in the best possible conditions. 45 points after the first race are some nice spoils. I've never started a season this well and now we'll be thinking about Aragon and how to stay on this path”.

Sylvain Guintoli couldn't have asked for a better début: “It's great to start off with a win! Quite honestly, after the tests I know I could do well and from the start my intention was to give it my all. My goal has always been to win, but sometimes you have to adapt to conditions. However, today the setting was good, I didn't have any serious concerns about tyre duration and everything went according to plan. In the first race I didn't get off to a good start and I lost a few positions, but lap by lap I found the right pace to move forward. Eugene had gotten away well and when I overtook him I managed to keep the distance and take this important win. In Race 2 Eugene had a bit more than me in the last laps. He employed a strategy similar to the one I used in the first race, but this is a fantastic result for the team even if we are just at the beginning of the championship”.