Aprilia: all new team and bikes, the 2019 MotoGp challenge has begun 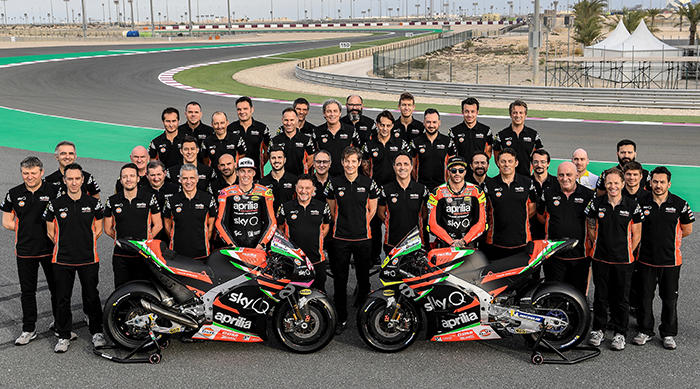 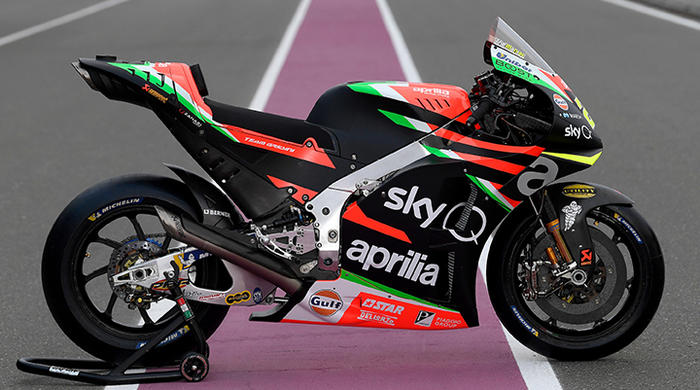 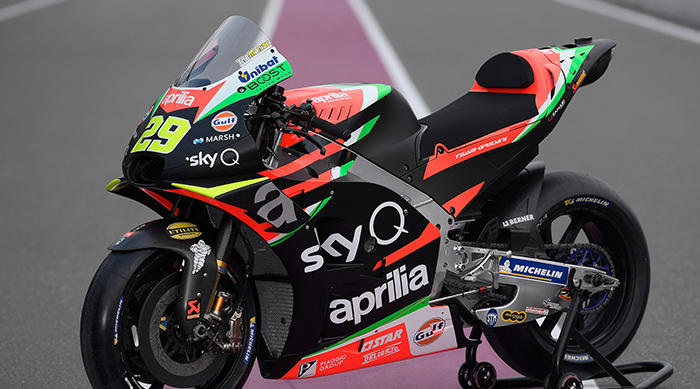 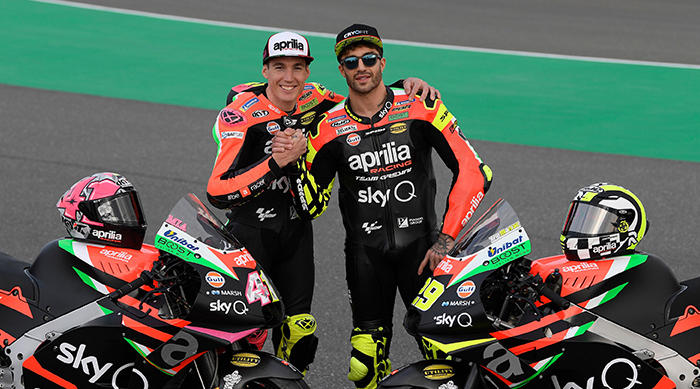 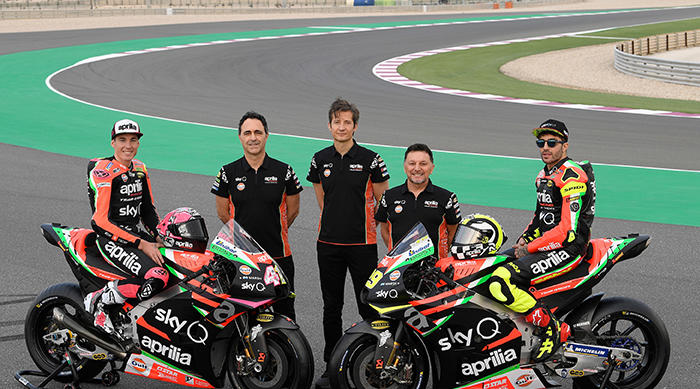 A top shelf test team is born, with Smith as “third forward” to continue growing

Aprilia Racing’s 2019 season begins under the sign of change. Both on a technical level and in terms of the Italian racing department’s staff which, after radical reorganisation over the winter, renews its resolve in the 2019 World Grand Prix Motorcycle Racing Championship.

The most visible aspect of the hard work done over the winter is the new RS-GP, the evolution of the young project (born in 2016 and therefore the youngest on the grid). It now has an aggressive, black livery which is explicitly reminiscent of Aprilia tradition. The technical and design cornerstones that make the Aprilia MotoGP bike unique have been reconfirmed, starting from the four-cylinder engine with its exclusive narrow V architecture, combined with the seamless gearbox that was developed in-house. Both of these components have been further evolved, whereas the chassis architecture, which has always been the brand’s crown-jewel, now has entirely new solutions.

The 2019 RS-GP was built on the ideas developed throughout last season and further advancements are expected throughout the upcoming season thanks to the contribution of new arrival Andrea Iannone, who comes alongside confirmed rider Aleix Espargaró and test rider Bradley Smith, who will also be on the track in a few wild card spots during the championship. This is a top shelf three-man offence and a huge step forward for the brand which has never before been on the premier class grid with three bikes.

The two teams will be led by a new pair of crew chiefs, Antonio Jimenez for Aleix and Fabrizio Cecchini for Andrea. At the helm on the technical side of the house is Romano Albesiano, with new CEO Massimo Rivola at his side. The revamped Test Team will be able to count on the contribution of a fast and expert rider like Bradley, under the technical coordination of Pietro Caprara.

"It’s always risky to talk about expectations before a new season, but it is only natural when it’s an award-winning racing department like Aprilia Racing. Our trophy case in and of itself demands constant growth, a collective effort to arrive at a competitive level in MotoGP as well. On my arrival, I found a group with no lack of skill and passion, as well as extraordinary loyalty to the team colours which will be a fundamental part of our project. We can count on two extraordinarily talented riders who, although very different from one another, share the same extraordinary passion for this sport. It is no exaggeration to think of us as a ‘David’ against the giants of world motorcycle racing and I have no problem with this comparison since, in the end, David triumphed."

"The final part of last season and the winter tests were fundamental from a technical point of view. The arrival of Andrea and Bradley added new information to Aleix’s fundamental contribution, helping us to define the RS-GP’s line of evolution. This is a project that has come to fruition this season, with an overall improvement in every aspect. A lot of work was done on making it lighter. We made changes to the chassis architecture and electronics management, leaving room for further advancements that will be done constantly throughout the season. The reorganization of the racing department and the reinforcement of the test team were two key factors in preparation over the winter, allowing us to streamline processes and have more precise data analysis. These are essential aspects in MotoGP these days."

"The first tests of this new season were positive. I was fast, I feel at ease astride the 2019 RS-GP. From a human point of view, I have at my disposal one of the best teams of my career. We have a lot of work to do, but I cannot help being optimistic. With the arrival of Andrea, Bradley and Massimo, we are definitely stronger, I can't wait to start the first race in Qatar."

"We are faced with a big challenge. The match of Aprilia with an Italian rider always creates certain expectations, so it’s up to use to channel that into positive pressure. I approached preparation for 2019 calmly. In this sport, teamwork is fundamental and get caught up being in a rush. We improved at every outing and, to be honest, I was surprised at how quickly the guys at Aprilia changed the project based on my requests between Jerez and Sepang. We need to keep going like this, improving step by step. The right feeling is there."

"Starting my new role as a test rider has been very interesting. I really enjoy the analytical side of MotoGP and I have already learnt so much working closely with the team. The shakedown in Malaysia went well, I'm satisfied that both riders were able to benefit from all the work over the winter and immediately found a good feeling with the new RS-GP. The goal for the Aprilia Test Team and I is to drive the development forward and of course I'd like to edge closer to the pace of Aleix and Andrea in my wildcard appearances. We have great potential, and I'm looking forward to the new season."

"2019 is undoubtedly an important year for us. The new MotoGP season inevitably brings with it some expectations for Aprilia Racing Team Gresini. The new arrivals, from Massimo Rivola to Andrea Iannone, brought enthusiasm, but also overall reinforcement and reorganisation that, from what we’ve seen so far, seems to have returned encouraging results. I'm not forgetting about the Test Team which, with Bradley Smith, is doing an indispensable job for such a young project like Aprilia’s. We still have a long road ahead, but we have the skills and shared goals we need to succeed."

With 294 Grand Prix races won in World Championship GP Motorcycle Racing, Aprilia holds the record for the most wins of any European manufacturer in the history of top motorcycle competition. These race wins are joined by 54 world titles: 38 in the World Motorcycle Championship (20 in the 125 class and 18 in the 250 class), 7 in Superbike (double Rider/Manufacturer title in 2010, 2012 and 2014, Manufacturer in 2013) and 9 in the Off Road disciplines. The Aprilia trophy case also includes the 2015 victory in the Superstock 1000 FIM Cup with the RSV4 RF ridden on the track by Lorenzo Savadori.