Four stages crossing six Italian regions on both sides of the Apennine mountains. One thousand kilometers covered riding a Vespa, with the starting and finish line in Mantua.

Started in 1951, the 1000 km Vespistica celebrates once again this year the timeless legend of this great Vespa raid. Stunning nocturnal trips through Italian cities and countryside for a great tourist-sporting event dedicated to the world's most famous scooter.

Milan, 22 May 2013 – The first edition of the 1000 km Vespistica was held in 1951. Italy was back on its feet and running. These were the early days of the economic boom and Vespa was driving an entire continent giving freedom to entire generations.

Born to show the world the extraordinary features and potential of what would become the most widespread and popular scooter in the world, the 1000 km soon became a legendary event. Until 1970, the 1000 km were held in nine editions, involving various cities and regions, changing routes several times and attracting thousands of cheering fans to the roadside as the Vespa riders passed by… but never losing that epic and heroic flavour that only great motorcycling feats can provide. 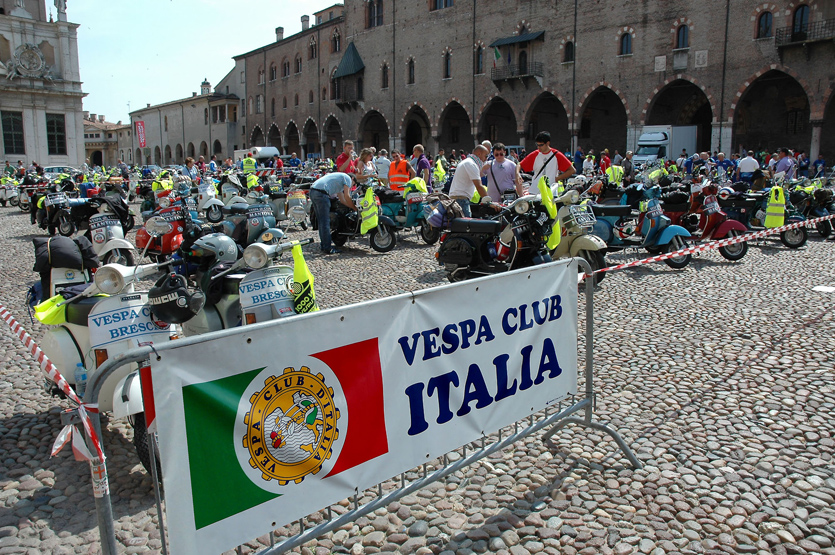 After being forgotten for many years, the 1000 km Vespistica was reborn in 2011 thanks to the passion and determination of the Mantua Vespa Club. It was a dream come true and a huge success: 200 participants, 4 regions visited in 5 legs and 10 time checkpoints, with delegations from over 50 Vespa clubs.

On Friday, May 24th, more than 300 Vespa riders from all over Europe and America will start their engines in piazza Sordello in Mantua. The route on the first long day will come to a close in the dead of the night at Ravenna (the first competitors are expected to arrive after midnight) after passing through Rovereto and Treviso.

The departure from the city in Romagna is scheduled at 4:30 AM with the caravan continuing on to Florence through the legendary Muraglione Pass. Of course, the stage finish line just had to be the Piaggio Museum in Pontedera, the town where the Vespa was born and where it has been manufactured ever since 1946.

From Tuscany the route will head north hitting Sarzana, going over the Cisa Pass, and touching Parma, to then return to Mantua where the riders will arrive on the evening of Saturday the 25th. By the end of the raid, six regions will have been touched: Lombardy, Trentino, Veneto, Emilia Romagna, Tuscany and Liguria.

At Mantua the winner of the 2013 “Audax 1000 km” trophy will be announced, awarded to the Vespa rider who will have received the least number of penalties at the time checkpoints along the route. The gala lunch on Sunday the 26th and the other award ceremonies will close an event that exalts the taste of travel and adventure and establishes a bond among Vespa fans from different countries and cultures who all share a love for Vespa.